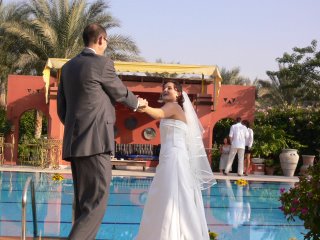 Yesterday was a very special day. It was November 5th, the birthday of my late husband and of a good friend, Erin Munro, but it was also the wedding of Mayan and Arthur. Mayan is the daughter of one of my best friends in Cairo, and the older sister of one of my daughter's best friends. There are a number of us who are close. Some of us are non-Egyptian wives, ex-wives and widows of Egyptians, some of us are Egyptians, but we all have such strong ties to Egypt that we've chosen to live here and make our lives here even if the relationship that brought us here initially is no longer there. Yesterday was utterly beautiful.
Mayan and Arthur met in the UK where Mayan (like her father in Cairo) is working as an architect in London. As they got to know each other, the realisation that they wanted to spend their lives together grew, leading to their wedding yesterday in a church in Heliopolis and a garden party celebrating the union out here in Sakkara. I was taking care of some sick animals and didn't make the noon wedding, but arrived at my neighbours' in time to greet the bride and groom as they arrived in (what else?) a shiny jeep decorated with flowers and ribbons. The crowd waiting for the couple exemplified part of what I love about this country. The bride's Christian Egyptian family was there as was her English family. The hosts were a Muslim family whose head is Egyptian/Moroccan while the wife is Egyptian/German. The groom's family are English and Dutch. The guests were from every possible background and nationality. 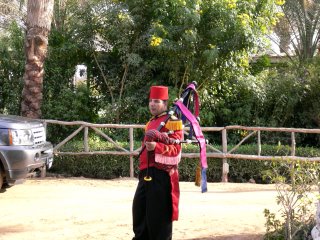 Egyptian weddings are fun. One of the traditions of them is the Zaffa, the procession of the bride and groom into the reception preceded by singers playing tambourines, pipers (you probably thought they were only Celtic), reed players, and dancers. A good Zaffa can wake the dead and make them dance. The tambourines provide a driving rhythm as the women in the audience ululate shrilly. This is a sort of trilling call involving movements of the tongue that I've never learned to do and is traditional at weddings and other joyful occasions. I've seen the processions to last as long as almost an hour when the wedding party was entering a hotel. 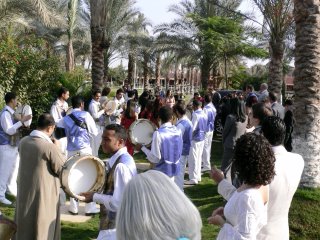 Hotels and their visiting guests love weddings, although not always for the same reasons. The guests love them for the exotic beats and the dancers. The hotels love them because they make a TON of money on weddings. Our zaffa was only about fifteen minutes long since the bride and groom emerged from their sunflower-decked jeep at the end of a garden path between rows of date palms as the guests lined the path to watch, cheer and toss fake coins. About ten singers in pale blue satin waistcoats offered praises of the bride and groom and encouragement for the enjoyment of the festivities. 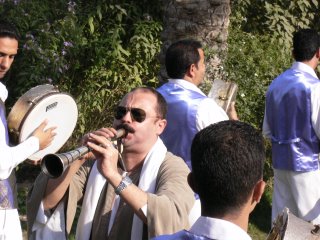 A group of six young women in red dresses danced down the path in front of the couple, two of the women wearing headpieces carrying brass candelabras bearing lit candles. The candle dancers didn't dance the entire way down the path, quite understandably. I think that those candelabras must be really heavy. 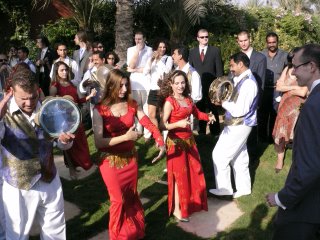 The procession led into the garden of the country house and to the deck of the swimming pool where Arthur and Mayan danced before the guests to the old rock and roll song "Happy Together". Old friends who hadn't seen each other for ages found time to catch up on gossip in the afternoon sun as we watched the wonderful fusion of two families from different parts of the world. First time visitors to Egypt sat with archaeologists and asked questions about working here, about archaeology and culture. Young people from at least four different countries compared parties as they mingled over lawns sprinkled with palms and gardenia bushes.

About sunset everyone moved into a currently empty horse paddock where a Cairo restaurant had set up tables of traditional Egyptian dishes such as koshari (a mix of pasta, dark lentils, rice, a spicy tomato sauce, and crispy fried onions), shawerma (slices of meat or chicken skewered on a rod and roasted, then sliced thin and mixed with tomatoes and onions in pita bread) fattah (a mix of crispy bread, meat, and a creamy vinegary sauce..excellent), kofta, kebab and shish tawouk (grilled ground meat, meat chunks and chicken chunks respectively) along with salads and cooked vegetables, some of them stuffed with rice. Local ice cream and desserts such as Om Ali (a sinful concoction of cream, crispy bread, nuts and raisins), fought for room with freshly made sweets cooked before us. I think that our visitors had a chance to sample some of the best of Cairo's cooking. 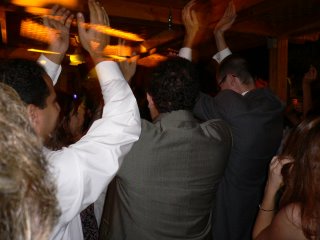 And then the dancing started.
Disco, rock, and Arabic music poured out of the speakers set up in the garden and the younger members of the crowd proved that the night belonged to them. English matrons found themselves being pulled onto the makeshift dancefloor under a trellis to try their hips in an Arabic shimmy. Men young and old clapped hands over their heads in encouragement and appreciation of the women's efforts and then found themselves being pulled into the circle.

I watched the festivities until some of the evening's chill began to work its way into my bones. The autumn evenings here are cool these days and once the sun has gone down, leaving a crescent moon kissed by a single star in the velvet sky you'd better be either dancing or wearing a sweater. 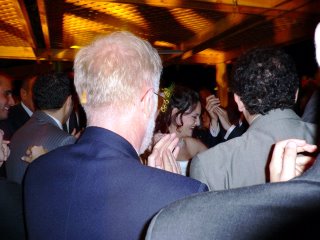 After riding all week, my knees were not up to dancing and my light jacket wasn't up to the chill, so I retired around 8 pm. Most of us fogeys packed it in by around 9 pm, leaving the dance floor and the garden to the younger generation. 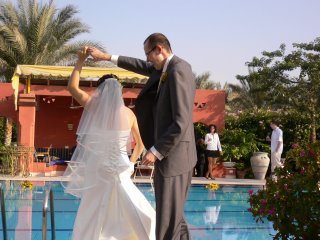 The bride and groom eventually called it a night and retired to one of the hotels near the Pyramids. Today they drove down the Sinai peninsula to spend their honeymoon in Sharm el Sheikh. I'm sure some sunshine will help them through the English winter ahead. I know that I will see them often in the years to come. The thought brings me a great deal of pleasure because they are a wonderful, lively, loving couple who will have much to bring to this world. Bless them and the parents who raised them.
Posted by Maryanne Stroud Gabbani at 8:40 PM 9 comments: