I guess I don't really like September 11 anymore. There are days in the year that give you a bit of a lift..I go for the soltices and the equinoxes myself being sensitive to light changes. December 25 gets a primitive childlike cheer and I'm partial to October 12 (Canadian Thanksgiving) which is earlier than the American version because it gets cold up there sooner, but it's still a great excuse to overeat with family and friends. But September 11 got ruined for me five years ago when I was worrying about my two kids who were in New York at university at the time and then worrying about all of their Egyptian friends who were in university in the US at the time...many of them came home after concerns about their safety there. Yes, the world did change and it was one of those "I remember where I was when I heard" moments but now I just notice the date on the computer and think "that's why I feel so cruddy today." Anniversaries are powerful things but sometimes we need to move on. I really felt that need today.

One of the major stressors in life is building a house, I'm sure. Okay, my house is built, more or less, and I'm even living in it although the cabinetmaker who was building my bathroom cabinet upon which my sink will rest has had some sort of meltdown due to his recently accomplished marriage and I'm still brushing my teeth in the guest bathroom next to my office. We are finishing the guesthouse on the farm with a visitor expected shortly and the work is frantic. Not fun at all. 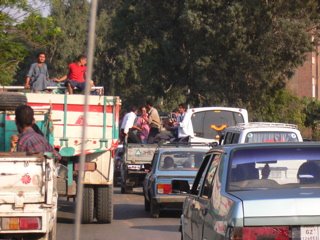 I'd gone out with Mohamed, the angel of mercy who was my husband's driver, my driver, then my son's driver, and now is my right hand man on the farm. He gets out there helping the gardener plant lettuce, holding horses while the grooms tend to a cut here or wash something there, supervising workmen building walls or plastering or painting, keeps my accounts...this man is worth a million dollars. He and I ventured into the city to buy some items for the bathroom in the guesthouse and on the way back encountered a string of cars, trucks and buses carrying a group of villagers from a village to the north of us along our route to another village to the south where there was to be a wedding. The tipoff to the purpose of the caravan was the pickup truck filled with a group of young men playing a tambourine, singing and dancing, and generally endangering life and limb in Cairo traffic while bringing a smile to everyone's faces. Cairo traffic is tough at the best of times but when you are being treated to a serenade, however off-key, with this kind of youthful enthusiasm, it's really hard not to break into a smile. 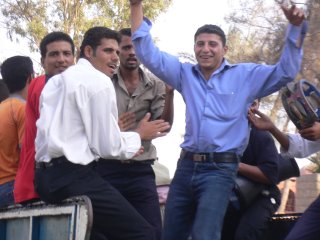 We found ourselves wedged in between the pickup with the boys, a dump truck filled with furniture, and a mini-bus filled with the village elders who seemed to prefer a more sedate means of transportation but who were just as joyful if not as loud as the younger set. Gradually we made our way past the cars fighting to attain the highway on-ramp and gained the relative peace of the country road along the Mariouteya Canal heading south towards the farm. Eventually we stopped to pick up some grapes and guavas and we lost the group...or they lost us as the case may be. 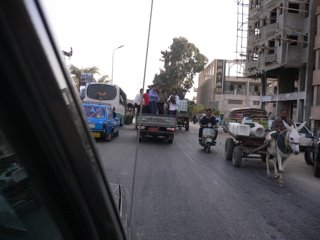 Lord knows at my age I have no illusions that marriages are happily ever after situations. On the contrary, marriage is when you discover just how much of life is routine, boring, and necessary. But it is a beginning and beginnings must be celebrated just as ends must be remembered. Everything in the world begins, ends, and changes in between. Thank heaven.
Posted by Maryanne Stroud Gabbani at 7:41 PM 3 comments: