Seeing In A New Way 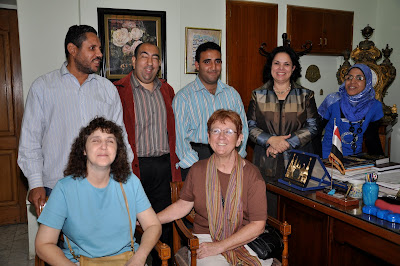 This has been a very busy spring for me. We've been trying out a new type of work, equestrian tourism, at the farm and all of us have been spending a lot of time in the saddle. As well, I've had some friends come to visit during February, right in the middle of one of the riding tours of course, and wanted to have some time to arrange some things for them. Laurie and I have been friends on email for over 15 years and friends face to face for almost 10 years. We got to know each other on Equine-L so it was only natural that, having recently retired from her work, she should decide to come and visit me in Egypt and go riding. What might not seem so completely natural is the fact that she brought a friend along to "see" Egypt who is blind. I was a bit taken aback at the idea of Gail wandering around our stretch of the Sahara with only someone calling out directions, but all went well and will be in a Sarcophagus post soon. When we were planning activities for Laurie and Gail the seeing issue was an interesting parameter. We talked about museums, but as Gail said "Once you've felt one glass case, you've felt them all". So true. 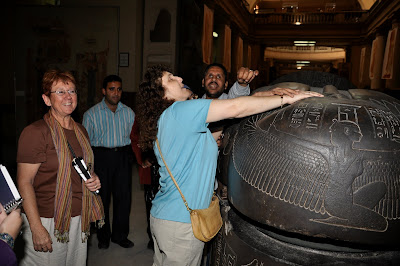 BUT...I'd read that the Egyptian Museum was instituting special tours for the blind so I called them. Mona, the assistant to the director Dr. Wafaa el-Saddik, told me that so far the tours had been done for school children and not for adults but she would see what they could do. I was totally delighted when Mona called me back to say that they would be happy to do a special tour for Gail, but not nearly as delighted when I realised that I wouldn't be able to participate because I would be working with some riders. 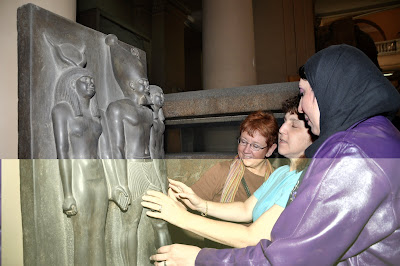 The museum has taken their tours for the blind very seriously and has engaged blind guides to give them. They know the pieces that they present to visitors and also understand how best to "show" them. So not only are blind visitors benefiting from this new service but it is creating work for blind guides as well. Because Gail and Laurie don't speak Arabic, Dr. Wafaa arranged a translator to go with them as well to enable the conversation among everyone concerned. The lovely photographs of Gail examining pieces were taken by a professional photographer since photography is forbidden in the museum. 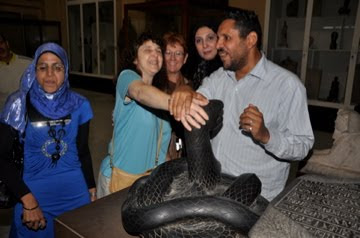 Gail and Laurie had a great time exploring the museum and many of the more ordinary patrons were rather jealous that she was allowed to touch things while they were being told not to...but there have to be some perks to being blind after all. The last day of their visit we went to the Coptic Museum as well where many of the displays on the ground floor are stone carvings that could be "seen" by Gail. No one minded that she was "seeing" them with her fingers there as well, but without an official photographer to take photos inside the museum, I could do nothing with my camera for my sighted friends to enjoy.