One of the things about Corona has been the fact that the focus of life has changed enormously for everyone. People I would never have expected to have baking skills have been turning out some astonishing loaves of sour dough. One family got an egg incubator and hatched a few duck and chicken eggs that they got from the farm. I have found myself paying more attention to the social lives of my dogs this year as the pack at the farm seems to have attained some sort of maturity. It was formed initially by the incomparable Finn, who passed his authority on to JC and Calypso, with Rocky acting as regent. One of my fantasies in creating the farm was to have a space where I could do some of the ethological studies that had interested me in graduate school. I must admit that between my own busy life and a certain level of human myopia, it wasn't until Finn was getting on that I realised that I had a self-determining dog pack to look at. 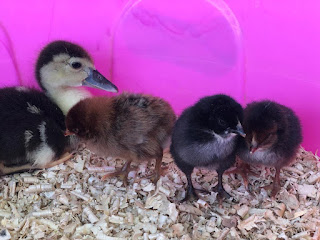 Last spring, a friend of mine was looking for a couple of dogs to live with his sheep and goats at his new farm. He'd managed to find a livestock guardian dog that someone had mistakenly brought to Egypt as a pet later realising that the dog was going to be far too massive for a garden. Someone had brought me a baladi pup at the same time as I'd gotten our Great Dane pup, and while they were great friends while young, the baladi was one of the really deeply feral dogs who, while he could be very sweet on occasion, was not at all focused on relationships with humans, and was only really polite with dogs much larger than himself. He and Fulla, the guardian dog got to know each other on neutral territory at a nearby boarding kennel and have become a perfect match. She is a lot larger than he is and he is happy living with his enormous lady friend where he doesn't have to interact with people all the time.  We rarely re-home dogs, but this one worked out. 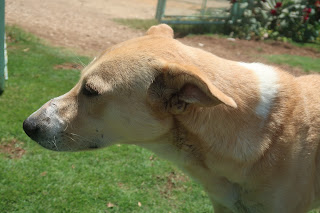 Later this summer, two of my male dogs began jumping over one of our garden walls to frolic in the dirt road by the farm with a female baladi dog. Eventually, almost as if they were offering her protection, they coaxed her into coming into the farm and joining them. For a street dog she was in good shape, not too thin or too insect infested, but she has gotten quite sleek in the past few months. She seemed to be accustomed to humans around her and was easy to handle, so we gave her all her shots just to be sure, and Marte settled into life at the farm. At least this way, the boys weren't jumping out of the garden, a feat that was not inconsiderable since the walls are about 3 meters high. When puppy season started, Marte's behaviour changed and the boys, all of them, were all much more interested in her, despite the fact that all of our dogs are neutered. We had courtship going on at all hours and all over the farm. There were plenty of times when I was quite relieved that we had no child visitors to observe the festivities. It was time to check to see if Marte had been spayed, which it turned out that she had been...partly. Someone had removed the uterus and left the ovaries, which were in turn rather inflamed and one of them was encysted, making Marte quite grouchy. Life returned to normal of sorts once her plumbing problems were sorted, except for Peter. Peter was a totally feral baladi dog that had been consorting with Marte outside the wall and began coming into the farm while Marte was experiencing a false heat. Peter was interesting. He was very polite, never caused any trouble with the other dogs, and although he never showed any interest in getting to know the humans here, he also showed no aggression towards us. Most of the time he would come at night, play with our dogs and Marte and then leave. Again, the sense from the other dogs was that they were offering the protection of the farm to Peter, to the extent that one morning I found him fast asleep on one of the dog beds in the living room. He took off quickly when he awoke to see me there. The girls told me that usually he would sleep near my house and raise an alarm if any of them came over for something at night. He seemed to feel that I needed an extra level of protection. 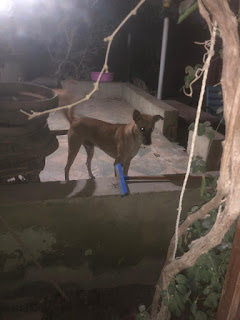 Lately his visits are more frequent, and he's taken up an evening residence on my back porch overlooking the garden. Occasionally I hear a warning woof from Calypso and BenBen who guard me at night while snuggling under the covers of my bed and I suspect that Peter has come to the dog food dishes that are in the hallway outside my door. The girls have told me that they have seen him scooting out the dog door if they come in early which makes it seem that he has been comfortable enough to join JC, Marte, and Rocky on the living room dog beds. The young dogs sleep in the girls' house for the most part. Mariam, who is our official dog whisperer, has been gradually working on getting within petting distance because if he is going to be hanging around our dogs, he needs to get a rabies shot at some point. We aren't terribly concerned about vaccinations for corona, lepto, and parvo because he is about a year old and if he hasn't died from these things yet. he isn't likely to. But getting a rabies shot is important for him and our dogs as well.

While Marte was at least partially accustomed to human company, and I've had the experience of taking Rocky into the pack from a totally abusive situation, Peter is our first completely feral dog to come to us as an adult, and it is fascinating to see how this is going to work out.

Posted by Maryanne Stroud Gabbani at 11:13 AM No comments: