Listening To The Silence

My camera has been having some dust issues lately. What a surprise considering that it gets tossed into my bag anywhere I go whether on foot, horseback or in the car. I take it everywhere and there's dust everywhere in Egypt. After two years any digital camera would get a little sticky, so I took it into Panasonic in Nasr City, where, of course, the camera opened and closed perfectly. The guy at the service desk handed it back, saying that it was fine and was rather bemused when I suggested that it might need...GASP!...service. I walked out with a receipt for my beloved Lumix and a promise that it would cost between 50 and 500 LE and would be finished in ten days. Unfortunately but as usual, that was a month ago, and today when I called and totally lost it with the service department they told me that I would, inshallah, have it tomorrow. All of this is to explain the scarcity of visual aids. The pictures here are either older or were taken with my Nokia.

We are over halfway through Ramadan, well past the first part of the month when the general population of Cairo is going around the bend from caffeine and nicotine withdrawal. After a week or so their bodies are used to the idea that they will get their fix after sunset, but the late nights and the sugar highs from Ramadan deserts ae beginning to take their toll. 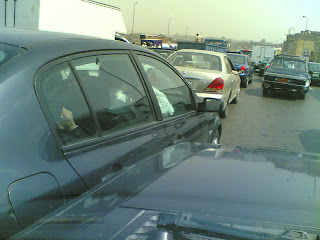 Today I had to do something that I try not to do during Ramadan. I drove myself into Maadi to take care of some urgent errands. The traffic wasn't really as bad as I'd imagined it might be, but it was bad enough. Between the Monib Bridge and the Autostrad, the flow slowed to a trickle and as I crawled along I could see the cause. A large truck was blocking the left lane (not necessarily the fast lane in Egypt) and behind it I could see a small car was rather smooshed against the concrete guard rail. People were standing around discussing the situation and there seemed to be no causualties, which was a relief. Just ahead of the truck was another car that had somehow been involved in the mess as well. 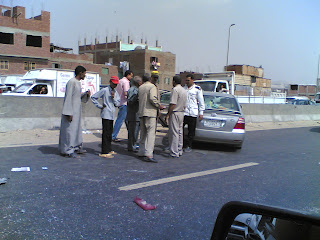 I don't know if anyone collects the statistics, but based on reports by friends of mine who don't have the option of holing up on a farm and just going places on horseback on dirt tracks, I'd be willing to bet that the accident rate goes way up during Ramadan. The temperatures have been in the low to mid 30's C (low to mid 90's roughly by that other measure), so dehydration is a real issue. Blood sugar rates that are scraping along the asphalt during the day skyrocket after iftar...as do the speeds of many cars. It really is not much of a surprise when people tell me how just in our neighbourhood there have been two hit and runs and one major head on collision in just the last ten days. I don't like to drive during Ramadan. I'd rather stay home.

One of my informants about traffic conditions came out to ride with me this evening. She's military, an fighter jet mechanic, and does a lot of driving between the base and Maadi where she comes on her days off. She rides as much as possible while she's here. I guess it's a good antidote for all that mechanical stuff. I suggested that she come out and ride with me over the iftar period to hear the silence of the countryside, so she came out about half an hour before iftar. The guys got our horses ready while I finished a riding lesson with a couple of small girls and we set out for the trail while they set out for iftar. 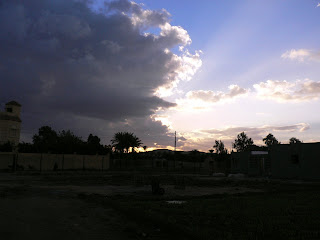 Iftar, the breaking of the fast, takes place just after the call to prayer at dusk. Half an hour before the call, there were still a few farmers working in their fields and a few stragglers urging their livestock homeward, but most of the fields were empty. Wonderful smells of garlic, onions and tomato drifted from the houses we passed and children were rushing in from playing outdoors. You never realise how much ambient noise a place has until it goes away, and the quietest time in Egypt is during iftar. It's one of the few times when you can be out in the countryside and truly be alone as long as you are not near someone's home. We ambled along enjoying the birdsong and waiting for the moment when we would stop hearing the trucks on the Mariouteya Road nearby. This is one of the major routes south and the steady rumble of trucks, buses and cars on it becomes a kind of white noise that you don't really notice until it goes away. Eventually that time comes when even the slowpokes have either arrived home or given up and the white noise is gone. 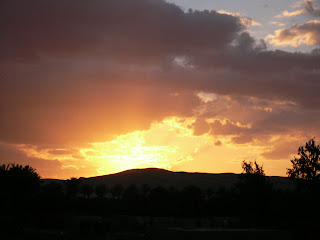 The call to prayer echoed from the mosques of the area and gradually a deep silence fell over the fields and canals. We were the only people out on the trail and every family we passed invited them to join them for iftar. We thanked them and continued our ride. The sky darkened and the palms became black outlines against the horizon. Closer to the farm a few cars were beginning to move about as families left their homes to visit friends. We were passed by one large blue dump truck full of kids who shouted greetings. I guess if the family vehicle is a dump truck, that's what you use. We did, however, decide to prudently avoid the larger village on the main road by the country club and the smaller one just past the entrance to the farm because of another fine Ramadan tradition that really doesn't go that well with horses...cherry bombs and bottle rockets. Sometimes discretion is the better part of valour.