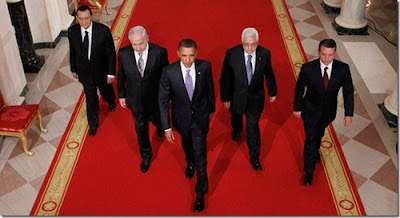 About a week ago an Egyptian blogger noticed something odd on the Al Ahram website. While news sites from all over the world had published a photo of Obama, Mubarak, King Abdullah of Jordan, and the heads of the Israeli and Palestinian states all walking into begin a new round of peace talks, Al Ahram had published a slightly different version of the photo with Mubarak walking in front of the others. 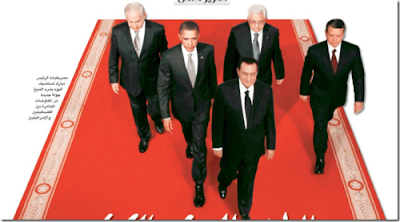 As Wael and subsequently many, many others pointed out, the picture was obviously photoshopped. One discussion of Wael's post quoted him as saying that this approach was typical in Egypt. When there was a problem to be solved, rather than really doing something people preferred to "photoshop it".

Adobe may not be too pleased to see that the name of it's photo processing program has become a verb, especially one with such controversial underpinnings, but it most definitely has. Discussions of the use of Photoshop to alter body shapes for models appear online at Jezebel.com and in media articles. People gasp and say "horrors" but the visual distortion of our world has become so commonplace that looking at something warts and all can be shocking. 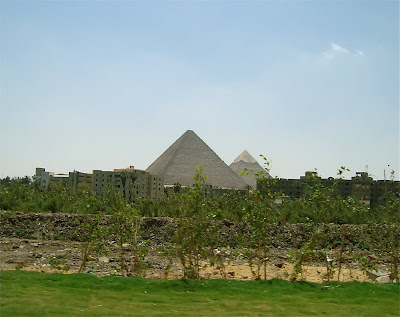 I was sitting with some friends on Friday enjoying the afternoon with lunch in a garden and the talk turned to the terrible piles of rubbish that one finds at the very end of the Moneeb portion of the ring road. The road was intended to go around the back of the Giza plateau to join up with the highway to Fayoum and the other end of the Ring Road near 6th of October City. UNESCO and other groups protested the proximity of a highway to the antiquities and construction was stopped on the road abruptly. The dirt road bed still exists and is, in fact, used extensively by cars and trucks wanting a short cut to the Fayoum road. But at the end of the highway portion, trucks carrying rubbish to the Giza dump take advantage of the fact that no one is around to see them to drop of their load on the end of the highway, thereby saving the driver both time and the money that he would normally pay for entrance to the dump site. This particular spot is also one of the best places to take a distant shot of the Giza pyramids...as long as you crop out the enormous piles of stones and rubble in the foreground. 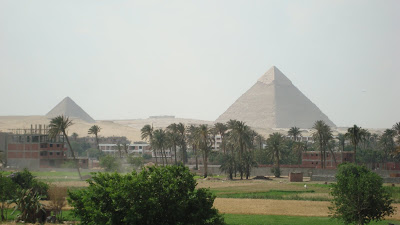 Some of the people who live in the city were asking why the government allowed such dumping and those of us who live out here just began laughing. The "government" does nothing out here and sees the need to do nothing. Every so often someone important will visit and in the weeks before the visit trees are suddenly planted along roads, canal banks are covered in truckloads of sand to disguise any ambient garbage and so on. This is like the transformation of Cairo University (which included banning most of the students) for Obama's visit. If it looks good for a photograph, then that's good enough.

But at the end of the day, we don't live in photographs, do we?