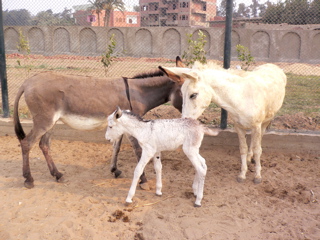 One of the things about having animals who decide to have babies is the waiting game. Sometime before we decided that George the donkey should be gelded, he decided that Margarita was the cutest thing in the world and acted on that thought. Sometime last spring we thought that Margarita was looking a little pudgy, but we didn't pay much attention until the pudge took on that special shape over the summer. The wait was on. We knew when George lost the family jewels, but how long before that was the nefarious deed done? Daisy appeared at about 10 am a month ago. She is a leggy fuzzball who takes after both of her parents. George is still our main wagon-puller extraordinaire, while Margarita mostly hangs out with the goats, sheep and water buffalo taking care of Daisy. We gave mother and daughter a couple of days alone to bond and sort out the mechanics of family relationships before we introduced them to the rest of the livestock. Now Daisy is bouncing around the goats and sheep very comfortably. 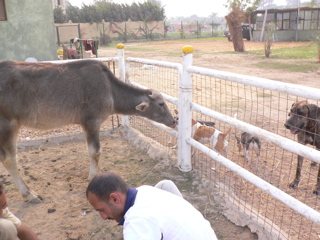 The rest of the animals in the paddock are more comfortable around humans than our baby donkey even if Daisy gets the larger amount of attention these days. 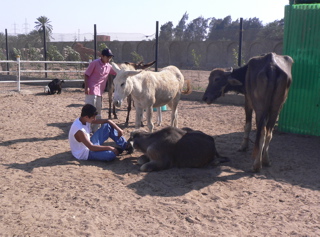 Her level of comfort around humans will grow gradually as she gets plenty of petting from everyone. Visiting children (and some of us larger types as well) get a kick out of hanging out in the livestock paddock petting various creatures. We've closed in the paddock so that some of the rather boisterous dogs don't go bouncing in disturbing the sheep and goats. The donkeys and water buffalo established relations ages ago, but then some of the dogs are quite a bit larger than some of the smaller goats, so the situation isn't really the same.

On the other side of the livestock paddock fence, we've had some new arrivals as well. About a year or so ago I was astonished to find that an old riding friend of mine from Alexandria had gone to the trouble to find out where I was now living. 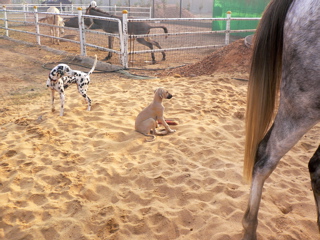 I've known Hafez for probably about 15 years and remember very well the graceful leggy hounds that used to accompany him riding at the Smouha Club there. Hafez has been a lover of Moroccan Sloughi's for years. Sloughi's were used to hunt gazelles in North Africa for centuries but found themselves on the hunted list long ago when French authorities felt that the dogs were a danger to gazelles and ordered them shot. For years Hafez has been trying to get me to take on a Sloughi and this year he succeeded. His female Zamorra, a lovely desert coloured mountain dog he'd brought back not long before, had a litter of fourteen or so a while back and I took my senior rat terrier over to help pick our new member. I knew that Terra would be fine with a pile of puppies bouncing around, and I figured that whichever pup showed herself to be comfortable approaching this crotchety matriarch would do just fine in the pack. One little female did just that, trotting up to Terra to introduce herself and Sabah (meaning morning) joined the funny farm. She is certainly a fitting resident. 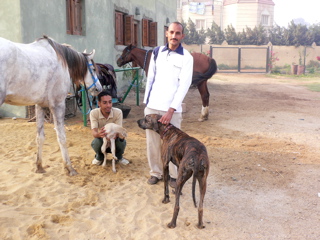 At arrival, she was slightly smaller than the terriers, but now she's fast encroaching on Dalmation size. Both Great Danes and Slough's are sight hounds and love to run. When they aren't running they are very proficient in holding down some fairly large sections of lawn or sofa. Sabah and Morgana will be almost the same height but Morgana will outweigh Sabah by a significant amount, so I imagine that she will be a much better lawn retainer. Oddly enough, somehow Sabah seems to have figured out that she and Morgana share a lot of things and she follows Morgana around all day, sort of Morgana and Mini-Me. Watching the youngest terriers, the Dane, the Sloughi, and the Dalmation racing around the lawns is an utter delight.

Our last newcomer was another Dalmation, Disney. Well, we don't really know what her name actually was, so she's been dubbed Disney. Disney was a gift to a young woman living in Cairo, but she had to leave so she left the dog with a friend of mine who couldn't possibly keep her. She, in turn, dropped her off at the farm. She settled in with the grooms and was making progress dealing with the rest of the pack who sleep in the house with me, when a neighbour offered to take her into his landscape nursery. Although the land was fenced, someone left a gate open and Disney ran out into the road where she was hit by a car losing one of her hind feet in the collision. She came to the gate of the farm and I piled her into the jeep for a fast trip to the vet where her leg was amputated just below the hock. She had an overnight at the vet's place in town and then was brought home to move back in with the grooms. I'm waiting to take a photo of her when she's recovered a bit from the surgery and the abrasions from the accident. So now we have two Dalmations with a total of 6 usable legs between them. But she's already starting to join in the evening insanity on the lawn.
Posted by Maryanne Stroud Gabbani at 8:08 PM 3 comments: