What Will I Be When I Grow Up?

Next month I am going to be 70 years old. I read that with a bit of shock because it truly doesn't seem quite real. I was just over 50 when my husband died and my world changed forever. Plenty of people at the time (mostly people who really didn't know me at all) told me not to worry, that I was "young and could still remarry". I just looked at them with disbelief because I was fairly certain that was NOT going to happen, although what was going to happen was not at all clear at the time. What did happen was that I had to deal with some pretty serious economic and psychological chaos, that I decided after about 4 years that I'd spent enough time on that and I bought the land for my farm, and just before that I began this blog. A year or so ago, I downloaded my blog posts, all of them... over about eight years worth, and I read them. It was an insight into my own life.

When I started writing the blog one of the sentences in the short bio I provided for it was something to the effect that I still didn't know what I wanted to be when I grew up. Sometime between 2003 and 2011, that sentence disappeared. In reading the blog posts, I tried to figure out when, why, and how I removed it. I honestly have no idea at all. But I now realise that my blog chronicled my transition from one life to a totally new one. At some point I grew up and I became something, and for months I puzzled over just what that was. Prior to 2003 I was a wife and mother, a teacher, a writer, a lot of things. I was the chief logistics officer of the Gabbani family and after my husband died, I was the chief mess cleaner-upper. Realising that the stress of the clean up process was doing nothing to either make my current life more pleasant, nor to extend my life, I decided to go back to my personal roots of small town/village living and I created the farm. Almost immediately, I began seeing the health benefits. My blood pressure and cholesterol levels on tests went back to my normal low levels. I slept better and had no need for coffee to keep myself going. A cup of tea in the morning and I was good. But that didn't answer the question of what had I grown up to be. 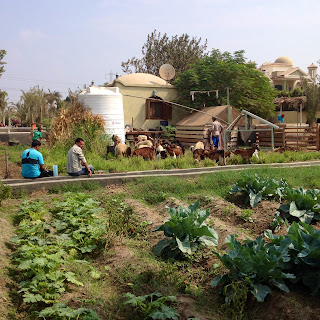 From the time I was young I absolutely knew that I wanted to raise some children. I wanted to be a mother. Being something of an academic over-achiever, I was told that since I obviously had the smarts to be a doctor, lawyer, or fill-in-the-blank, I had some kind of obligation to do so. Being told this only irritated me, and I steadfastly bounced from possible career or study to another equally interesting.  Eventually, I did finish a university degree, and then another one, only to come to the conclusion before finishing a third one that my heart wasn't really in it. When my dean of graduate studies in the psychology department at the University of Waterloo asked me what I thought I might do next in my exit interview for leaving with my MA instead of a PhD, I told him that I might start a Mexican restaurant in Toronto. But I didn't do that. I did marry and have two marvelous kids, eventually about eight years on I moved to Egypt with my husband...and then I was just as multi-focussed as ever.

Handling a household with four different cultures in its makeup (my husband was Sudanese/Egyptian and I was American/Brit) was sort of normal in Canada, but we never really went back to Canada, and Egyptians, regardless of their wildly heterogenous cultural and genetic heritage, value homogeneity. There was a bit of a balancing act for all of us to manage. I taught English to French-speaking school students, did some writing during my first few years in Egypt, then I did supply teaching at the American school in Maadi for some years while my children were attending there, got into writing and editing for a magazine, but for the most part, logistics still took up the majority of my time. My husband was almost constantly traveling, so it was up to me to be the steady point in my kids' lives, and to make sure that the moving parts didn't slice off anyone's legs as our family members moved in and out of our mutual physical space. I recall a period when I was in my early 40's of wondering what the hell I was doing with my life and why I had needed a graduate degree in social psychology to do it. After beating myself around the head and shoulders with these questions for a few months, I finally decided that however lunatic my planning had been, I did have responsibilities that needed to be handled and that my life overall wasn't a terrible one, so I'd best just get on with it. And I did.

When the crash came, it was a big one. My kids were in their late teens when their father died, one in university in the US and the other about to join him. When they both were away at college, it was just me and the pack of lawyers, bankers, and businessmen who were disemboweling the businesses that had been my husband's life work. I looked on from a spot of relative safety and knew that there was no way in hell that I wanted to drop myself into that insanity, although I had no doubts about my ability to manage much of it. It is a very troubling situation to look at work that you know could could do better than a lot of other people who are doing it, but to want to walk away from it because it isn't your work to do and you feel that it would damage you to do it. It rather reminded me of how I felt at graduating from high school and being told about all the wonderful careers that I could have that I really didn't want. Very disconcerting.

Quite abruptly, I began writing my blog, the first writing I'd done since my husband had died, and I decided to move from Maadi to a rural area near Abu Sir. It was my offsprings' turn to be disconcerted. I rented out the family home and came to an area where I knew a lot of people and had friends living in the area, which somewhat reassured them, but what the hell was I doing building a farm and living in the back of beyond? My kids had only known their somewhat odd but urban mother. We all moved past the shock, my life began taking on a form of its own without my late  husband or children defining it in any way, and it was sometime in this period when I decided that I had grown up. But what was I? Again, like about 15 years previously, I spent some months worrying about how to answer this question, and again as during my previous time of fretting, I guess that I sort of decided that this question was too hard to answer. I got on with the building of the farm, exploring avenues for income, becoming proficient in equestrian tourism, and enjoying the fact that my job was what I wanted to do even if I had to pay to do it. Not bad. 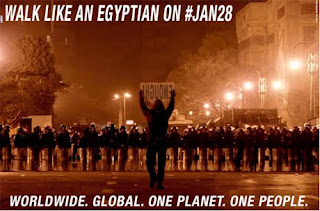 About seven years down the road, the revolution took place in Egypt, another outrageously abrupt event that I had absolutely no intention of missing even though I was just a spectator from the safety of my home in the country. I had never been someone who speculated about politics before, but I suddenly noticed that while I might not have been interested in politics, politics were certainly affecting my life and the lives of people that I loved and respected. My life took on a new facet as I turned my attention to trying to comprehend what the crazy forces at work in the Middle East and North Africa had in store for my home, myself and all the people around me, rural and urban alike. While eventually it would seem that the revolution changed little politically, it did change the way that we all looked at our lives, our country, and ourselves. My farm community had to relinquish tourism and find other outlets for ourselves. There was a lot of learning, studying, trying things out, and the farm has evolved even further. My staff, most of them with me for the past ten years or so, have changed, learned new skills and taken on new roles in our working community.

So here I am at almost seventy, and what have I grown up to be? I've become me. It truly is only very recently that I have realised that I don't need a label to slap on my forehead to let people know who or what I am. I didn't know what I wanted to be when I grew up because somehow I always assumed that it would be some kind of classification, something outside of me. But it simply isn't. I am me and I am very happy to exist as that. Perhaps much of the philosophical  advice we pick up in books and conversations points to that conclusion. I currently feel that our job in our lives is to perfect being ourselves, and the things that we build, invent, create, and pass on are just byproducts of that process. My husband left a legacy in infrastructure for the grain industry in Egypt, but he most certainly was not that legacy. I hope to have a legacy of sorts when I move on to wherever it is that we move, but I most assuredly will not merely be that legacy. It will be a byproduct of my being me. If all we have to perfect is our me-ness, life is so much simpler.