Are We Upstream or Down? 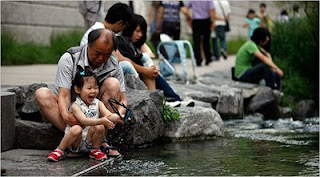 The New York Times today ran an article on cities like Seoul, South Korea, that were digging out, or "daylighting", streams and rivers that had been covered over for the sake of automobile traffic. This is an interesting idea here in Egypt where lately a lot of work has been done in areas of Giza in which large irrigation canals have been buried in pipes to make way for roadways. We do have the Nile in Cairo, although building and businesses line the river and don't really give human access to the water and view. The bridges here are crowded all night long during the summer as city residents seek the cooling breeze that persists along the river. Businesses have sprung up among those who rent out chairs, prepare food, and offer tea or soft drinks to the bridge lingerers. 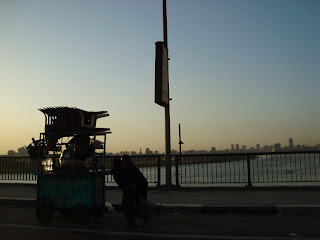 Many suburbs of Cairo have lost their canals to roadways as housing has overtaken farming in the area. Maadi has a wide green space of sorts along Canal Street, named for the canal that once flowed there. I don't know if the canal was filled in or redirected through pipes. While some people say that covering the canals helps to keep the mosquito population down, I would argue that we manage plenty of mosquitoes in areas with gardens but we are lacking the frogs, toads and dragonflies that abound around open water and who are major consumers of mosquitoes. But Egypt has millions of miles of irrigation canal in the countryside that could be enjoyed by walkers and others if they came out to do so. 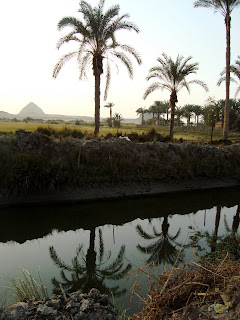 Living out here in the farmland I have gained a special fondness for the canals that I have to admit is not shared by many. Most people think that the canals are dirty, which in some areas they are, and especially when the water is low, they can have a rather ripe aroma of mud and rotting vegetation. The water in the canals is slow-moving so they tend to be a dark green with abundant algae, but many people don't realise that they are also full of life. They are teaming with small perch, frogs, toads, crayfish, and support a wide variety of birds and animals. One can find egrets, herons, three different varieties of kingfishers as well as bee eaters, rollers, swallows and other birds nesting near, eating from or flying over the canals. 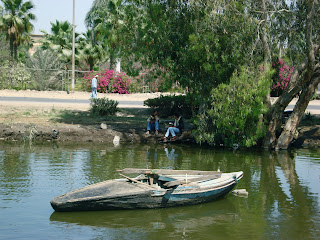 There are problems with the canals, without doubt. They do harbour schistosomiasis parasites and the water is best viewed from a distance, but this is certainly no reason to do away with them. Schistosomiasis, or Bilharzia, is a problem for the farmers who work in the fields and are often wading in irrigation canal water. I don't know that there are any sure solutions to our need for irrigation and the problem of Bilharzia other than the easy access to inexpensive medication for it. I see that my staff (who irrigate with well water on the farm, but who might help in fields on their days off) get dosed with praziquantel twice a year at least. There is also the problem that there is no better place to dispose of a dead donkey or water buffalo than a canal if the farmer lives in the valley. The water table is so high that nothing can be buried in the Nile Valley and most farmers don't have any means of hauling a carcass out to the desert to let the wild dogs and kites dispose of it, even if they wouldn't be subject to prosecution from the Antiquities Service should they do so. The fish, crayfish, dogs, and birds do a pretty good job of disposal in the canals, however unpleasing it may be aesthetically, and the body is generally gone in about 2 weeks providing water soluble fertiliser. 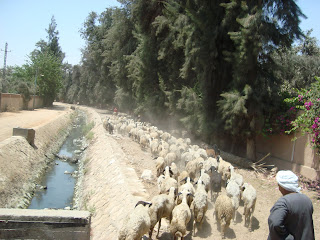 Our canals are the circulatory system of the Nile Valley. In the old days we had four months during which the Nile flooded the entire valley, drowning a large proportion of the rodent population, laying down a fresh layer of silt to fertilise the fields, and in essence, giving the valley land a yearly transfusion. We no longer have the floods to clear the valley and I don't believe that the mentality has ever adjusted to the change. The canals are seen as a necessary evil for the farmers and little or no work has been done to educate people in the best ways to keep their canals healthy. We have an astonishing wealth in our waterways and they should be nourished, protected, and cherished. 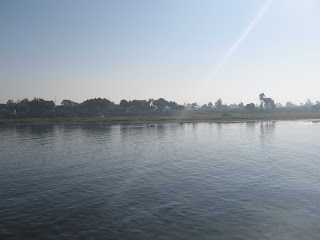