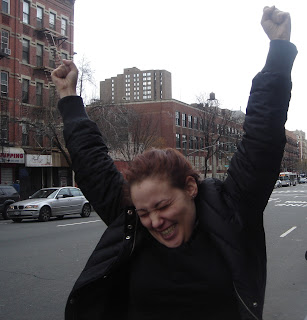 However it happened, Mobinil finally got service restored in our area this afternoon. Thank you, Mobinil, we love you again.

Unfortunately, the only suitably jubilant photo on hand is set in New York...but you get the idea.

The story as I understand it is that some of the villagers in Menawet decided that the Mobinil relay tower there was causing cancer or some such thing. Or maybe they decided that the steel and concrete could be put to better use...who knows? At any rate, from what I understand, and this hasn't been published in any papers that I am aware of, they dismantled the relay tower last week and the area roughly from Shubramant to Abu Sir in Giza has been left with no Mobinil service at all.

To understand what a disaster this is it helps to realise that there are about forty thousand people living in the area, of whom probably less than 10 or 20% have land lines. The rest of us, including myself, make do with mobile phones. Some of us use Mobinil, some Vodafone, and a few adventurous ones the new carrier. To be honest, Mobinil, until recently, had the best reception out here and was the most reliable. Vodafone has improved a lot lately after calls to technical support brought engineering staff out here to check out and improve the situation. Because I do a lot of distance riding and the mobile reception in the desert is spotty...sometimes Vodafone working better than Mobinil, sometimes the opposite...I've had lines with both carriers. Right now I have my Mobinil line forwarded to Vodafone so that people can reach me at home.

Today one of my neighbours called me with the news that Mobinil has apparently decided not to replace the missing relay tower for at least a year, leaving the area completely without service for residents and visitors alike. Bloody brilliant. By the time they do replace the tower there will be no Mobinil customers to need it. As someone who depends on my mobile phone and who has been a Mobinil customer almost since the company opened, I am seriously ticked off. Probably someone in the higher echelons of the company decided that a bunch of ignorant farmers don't need a relay...so who is really the ignorant one?

The link in the title will reach the customer support page at Mobinil. If you are a Mobinil customer and find the idea of leaving 40 thousand residents and who knows how many visitors to the area with all of its antiquities, hotels, clubs, restaurants and so on without Mobinil service, do use the link to let Mobinil know.

We would appreciate it.