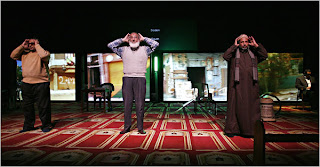 One of the things that I miss the most when I travel is the call to prayer that I hear five times a day here. After over twenty years of marking the days I find that, like the villagers around me, I have begun to tell time by the call to prayer. Due to the advent of electronics, the times of prayer have had their problems. I recall our first rented house in Alexandria that turned into a tunnel of sound every Friday. My dear husband had rented it before we arrived and he hadn't checked to see that there was a small mosque next to each of the four walls of the garden so we got the full benefit of the calls to prayer and during the Friday sermons the cacophony was unbearable as each sheikh vied with the other to make himself heard over the loudspeakers. Luckily, we were usually out on Friday afternoons. 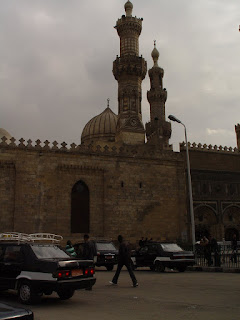 The next house that we rented had a major mosque only a few blocks away and not too many rivals nearby. The three years we spent there were a joy as the muezzin (the man who called out for the prayers) had a marvelous voice and it was a real pleasure to hear. Lately, as the article from the New York Times (that you can reach if you click the title here) mentions the government has decided that the way to eliminate the competing mosques is to broadcast the call to prayer from a central location and eliminate the local muezzins. 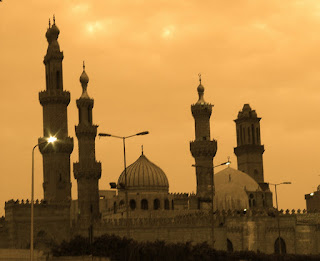 The play produced in Germany about the muezzins talks about this rather unknown job and the men who do it. It certainly isn't a path to fame and fortune, but a good muezzin is worth his weight in gold, in my humble opinion, having lived near a great one for three years. I'd much rather see the government ban the loudspeakers on the mosques and take the entire experience back to a more personal one. When the power happens to fail at the time of the call to prayer and you hear the intermingling of the various voices in the neighbourhood without the dubious benefit of loudspeakers, it is a lovely event.
copyright 2009 Maryanne Stroud Gabbani
Posted by Maryanne Stroud Gabbani at 11:59 AM

The call to prayer without loudspeakers is as beautiful to me as church bells. I am used to it and fond of it even with the scritchiness added electronically. I'll miss it when we move.

One of my fondest memories of Egypt is waking up on my last morning in Cairo and hearing the fajr azhan roll over the quiet city. There was something so powerful and yet so gentle about it that it nearly brought me to tears.

Lucky you! I too have the fondest memories of the three muezzins who surrounded us in Damascus, but the one we had in Cairo should have been strangled at birth. That mosque had a way with loudspeakers that reminded me of teenagers on heavy metal.
At least I got a limerick out of it!

There is an old muezzin in Cairo
Who sings like a mummified pharaoh
A muezzin who can sing
Is a wonderful thing
But this one's a terrible bother!

i would like to hear the call to prayer.

in Prestonsburg, KY United States, I visited the mosque, and the gentleman that did the call to prayer to his colonized community was absolutely beautiful, I felt like I was in Egypt.

Then one of the Muslim women, a young female Muslim, read to me from the Koran, and it was totally amazing, she was from Seria.

The Muslim culture is a respectful culture in my opinion. Muslin culture is so real, and has all the ancient.