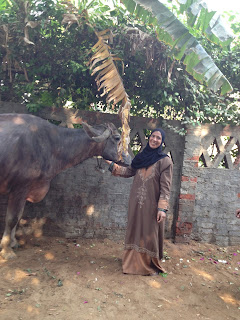 I have time for a quick Christmas present from the women of Abu Sir to the rest of us before I scamper to get my Christmas lunch organised. Yesterday I was out for a ride with a friend and stopped by one of my neighbour farms just to say hello and chat briefly. He had a story that almost had me falling off my horse in laughter. The women of my area have my deep and abiding respect. They care for farms, families and homes in pretty tough conditions but never fail to have a smile, a greeting and to lend a hand to others. They are the steel of their families. While this is a very traditional part of the country and one of strong religious conviction, these women are also very accepting and friendly and have always been a source of laughter and joy for me, a very nontraditional aging Canadian. I've been hearing from many of my neighbours that they are very unhappy with the mismanagement from the Muslim Brotherhood and the meddling ways of the Salafis for some time. One neighbour told me how when buses came to shuttle protesters into Heliopolis for the demonstration at the presidential palace that turned so bloody a couple of weeks ago, quite a few of the mothers around me informed their sons that if anyone wanted to take the bus into town, they were welcome to do so but not to bother to come back.

So apparently a group of Takfir wal Higra moved into our area to help our local population behave in a more "proper" manner. They were seen walking along the roads in their short galabeyas and had taken a mosque for preaching and an office in Abu Sir for organising.  A week or so ago, eight of the men went into the main souq of Abu Sir and as they were entering noticed one woman sitting by her produce with a little bit of leg showing from her galabeya. Very rudely kicking at her leg, they told her to cover up and be decent. This was a monumental mistake. As it happened, this woman was the head woman for the souq and a member of a very populous clan in the area that number in the thousands. She and the other women in the market attacked the eight men and beat them so severely that they had to go to the hospital. When the men tried to file a report with the police about the attack, the police refused to take the report, saying that they weren't going against these women as well...were the men crazy? So now the youth of Abu Sir are using the office as a tea room and the mosque is no longer being used for their fundamentalist sermons and no one has seen the Takfir group for some time.

If anyone is wondering who to support to get rid of Islamists in Egypt, here is your answer. The women of Egypt are some of the strongest women I've ever seen. 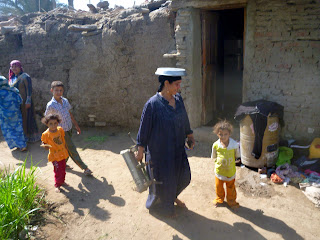 You have made my day!

WOW! This post gave me a good laugh! I live in South Sinai and I do not think any Egyptian salafi would try to bother with Badu women...
Maryam, Nuweiba

My respect for these women. This is the way to end the madness with decent mothers and sisters. Bless them all

The women of Egypt are remarkable. Even in traditional rural communities they most often are the "backbone", and the decision makers of the family. Thank you for the story.
Hani Riad, Egyptian-American

That is the best story I have read in a looong time!! Absolutely wonderful. I haven't been to Egypt but have spent some time in Morocco and East Africa and the women there always seemed the antithesis of the repressed Muslim woman idea...in fact my mother used to work as a Muslim chaplain in a women's prison in the UK and knew of a Somali woman who'd been locked up for biting off a man's testicle in a fight. You have to hand it to them...thanks for such a fabulous blog post! Cavemum

I found this post on a Facebook group page for IWE (International Women Explorers)started by my friend who is both and author and an Egyptologist. Her love of Egypt is only second to her work with women in these very exciting and challenging times we find ourselves in. Thank you for posting this very uplifting story of the vitality of women in Egypt that echos the strength of women everywhere.

that is amazing , my family are originally villagers , you showed the life of the women their very beautifully .

It is this spirit that will once again bring light to Egypt. Wonderfully uplifting stuff!

God bless us all, thank you for the wonderful story which shows what many of us know, Egyptian women stand against fanatism of any kind & have done so for many thousands of years...It would be much wiser & more fruitful for the MB to work with Egyptians as Egyptians than trying to impose foreign Arab traditions & lifestyles on Egyptians...something that has never worked in 7000 years Egypt=Egypt & will always be Egypt...all who came to conquer Egypt ended up Egyptianized!!

It's funny how you mix MB, Salafi and Takfir wa Hijra all together as if they are a single monolithic group. I think that is unfair. It's like saying that one black man belongs to a gang, all black men are criminals.

Not really funny at all. Definitely Takfir wal Hegira and other Salafi-like groups are different but they aren't noted for presenting a formal ID or wearing a badge. Ideologically they are different, but these differences aren't readily visible on a behavioural level all the time and there are differences even within groups, I would readily acknowledge. This isn't a scientific paper but a story. Relax.

This is so uplifting, it is like a ray of hope in these dark moments Egypt is going through

Egyptian women are a force to be reckoned with. Here's to hoping they continue to fight for what they believe in sending such narrow minded individuals back to the caves they emerged from. Great post.

Thanks for an amusing post!What Egypt needs is a female president!

That was a good story, I loved how the women supported each other and had the support of the community.

nice blog,
maye can we follow each other?
let me know.
kiss from Portugal

I have been loving your blog! I just discovered you tonight and I have been reading all evening! My family is moving to Alexandria this summer! We are soooo excited!

This is hilarious! This clearly indicates how these self righteous group of men make the mistake of deciding for every body, what is right and wrong?

Indeed kudos to Egyptian women, unless their steel is strong, Egyptian society will continue to be humane.

Absolutely the most wonderful story to come out of Egypt ! It's so refreshing to see Egyptian Women standing up for their rights and putting these pathetic male chauvinist pigs in their place! How the Muslim Brotherhood is even allowed to partake in Egyptian Politics, let alone be the dominant force is beyond me. The women of Egypt need to ban together and give every member of the Muslim Brotherhood an EXIT VISA (with no return).

What is daily life like for women in Egypt?

Daily life for Egyptian women is pretty much like daily life for most women. If they are married, they probably don't have a husband who helps out much around the house, they have kids who have to get to school, housework that is complicated by constant dust, and very possibly a job on top of that. And they generally have to do all that on way too little money.

MaryAnne? Hope all is well over there!
hughugs

I find your articles naive at best.
...well...one should always hope I suppose..
Egypt is going to hell in a handbasket and you are regaling us with how 'strong' (read:impotent) egyptian women are...