Living in a Dog Pack in Egypt ... Transitions to Now 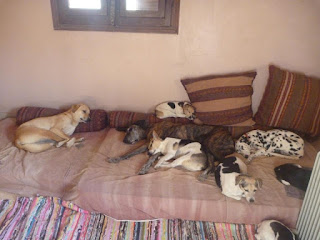 I started writing Living in Egypt in 2003 when I was still living in our family home in Maadi, a nice suburb of Cairo. I had a pack of dogs at the time but I don't know how organised they were. Since about 1998, I haven't really had less than almost a dozen dogs at a time, but a dog pack is very different from a bunch of dogs. A dog pack is a social organisation run by dogs for the welfare and benefit of the dogs, and it may or may not be associated with humans. There are probably more dog packs on farms or homes that can tolerate a lot of dogs than we are aware of, just as it wasn't until about 2006 or 2007 that I became aware of the fact that I lived with a dog pack.

My education about dog packs began with the sandy beige fellow sleeping on the dog bed at the left above. His name was Finn and he was about 3 or so in the photo. I don't know where he came from but he appeared in the food tray, eating kibble as fast as he could while all the other dogs looked on approvingly. When he first came, we had Morgana, a female Great Dane, Koheila, a Dalmation, and Terra, my oldest American Rat Terrier, who were mainly in charge of the dogs. Koheila and Terra were both exceptionally intelligent dogs, especially Koheila. She was partially crippled but very vocal and would bark orders to the other dogs and would often come into the house if I was inside to announce visitors. Gradually, as Finn matured and the old ones died, he took over the pack with astonishing organisation. Not long after JC joined us, a gardener who was also working as a night watchman in the villa next door let his children adopt a puppy from the street. This was Rocky (above). This was before we had built a wall between our land and the garden next door and the children used to tie Rocky to a small tree near the fence between us with a string that was so tight that it gave him scars which he carries today. My staff would put their hands through the fence to untie Rocky, hoping secretly that he would take revenge on the children who left Rocky covered in scars and with a short tail that had been amputated with a mattock. No amount of talking to the gardener and his family could help Rocky, but after a while the house was sold and the gardener's family left, abandoning Rocky, who promptly came to our gate where he waited patiently for me to let him come in. Finn was still young and not so pleased with the idea of another male dog his age, so when we did let Rocky in, Rocky took off to the far end of the farm by the horse paddock and ever so slowly worked his way back towards the house. It took him months to actually approach my home an over a year to be able to come inside. Meanwhile, he very gently got to know Finn and after a year or so he was Finn's second in command, his "wingman". Despite his heritage, which clearly includes mastiffs and pitbulls, and his history, Rocky has been with us for over 10 years and has never lost his temper with anyone at all. He is now, after Finn's passing, the alpha male emeritus, and all of the dogs defer to him and pay canine obeisance whenever they come into the garden or house and find him resting. 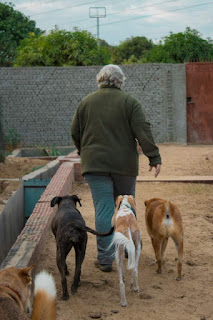 This photo of my canine supervisors was taken before Finn's death. He is trailing behind a bit, I suspect more for the ability to watch the others than due to disability. He was in quite good shape until he decided that  he'd had enough and was ready to leave when he was about 14 years old. He had also taken on the training of Calypso, the very dark brindle mastiffy baladi dog to my left. He often would correct her more firmly than the others and he was watching her carefully checking that her behaviour was correct. Additionally, and a few times to my painful discomfort, he corrected my behaviour towards her, as she was at a difficult age and was pushing boundaries, much like a human teenager. Twice when he clearly thought that I was being too rough on her scolding her for misbehaving I got a sharp nip on my butt. In the photo, Rocky is at my right hand, while Rosa our Saluki is in the middle. She was rescued from a situation where she and her brother were receiving insufficient food and care when they were quite young. Her brother had many health issues and only lived to be about two, but Rosa stayed with us until she was almost four last summer, and decamped to Germany with a lovely family with two little girls where she could be what she most loved, the pampered only dog in a largely female household. While she was here, there was a bit of an uneasy rivalry between Rosa and Calypso, both of whom felt that they owned me exclusively. Bedtimes involved quite a bit of diplomacy as both young ladies wanted to sleep under the covers on either side of me, as neither has any sort of undercoat and they both get quite cold at night. 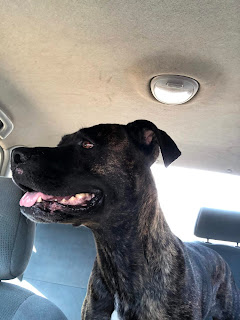 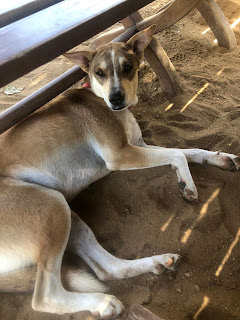 At the same time that Finn was taking on the training of Calypso, he was also pushing to have JC, on the right, take on more responsibility. Often he would be in the garden and if someone came to the farm gate, he would bark sharply, and Calypso and JC, or perhaps one of them only, would go to check on the arrival. As Finn's wingman, Rocky was never really taken in hand by Finn before his death. I suspect that they all knew much more than we did about the transition. Finn had brought JC into the farm one day when he found the pup, who was about a year or so younger than Calypso, trying to dig under the farm gate. My initial concern with JC was that perhaps he had some Huskie blood in him due to his colouring. To my point of view, this would be less than optimal because of the abundance of thick hair on that breed, which can make life miserable in the summer. When JC was about 6 months old, I began to notice some rather odd behaviours in him. One of them, was a relatively sudden aversion to a direct gaze. Most dogs are quite comfortable with a direct gaze, but wolves and coyotes are much less comfortable. In addition, rather abruptly, his body language with the other dogs changed in some odd ways, including odd very submissive postures when greeting the older dogs, and then he taught the other dogs to howl. Around this time an Egyptian friend who is quite knowledgeable about canines was visiting and commented that JC didn't seem to speak the local dog dialect all that well, which was leading at times to misunderstandings between him and some of the other dogs. There are wolves in Egypt, most of whom live in the desert where they largely hunt rodents and scavenge near the trash dumps. I had seen them myself briefly while riding in the desert near us and this thought sent me to search for the few images of Egyptian wolves on the internet. There are not that many, but I have known friends who also had found themselves with wolfdogs due to mates between some of the village dogs living along the desert's edge and the wolves hiding out there. Egyptian wolves quite naturally do not have the thick furry coats of the wolves of the northern hemisphere and are very much similar to JC. Not having anyone to do a DNA test, we assume on the basis of behaviour that he likely is part wolf.

When Finn decided that he was done with living it was a shock to us. He'd been fine in the morning but by mid afternoon he was clearly tired and not really interested in interacting with anyone. He was of a good age, and also a dog who, unlike Calypso who loves a car ride, had no intention of visiting any doctors. We have a canine vet at the other end of the farm and when Finn caught him leaving his clinic after a tough evening trying to perform a blood transfusion on a young dog carrying a plastic bag with some bloody rags in it, Finn decided that the vet was clearly The Enemy and not to be tolerated. Having a clinic onsite is great, but any time someone had to visit the vet for some stitches, for a spay/neuter, Finn had to come along and check out the clinic. He would then wait outside the door until we emerged successfully and walk us home. If he caught the vet on his own, he was definitely not welcoming an I was always relieved that we never lost a dog on the operating table. There were a couple of dogs who had to be euthanised in their old age with catastrophic issues, but for that the vet came to the house and somehow Finn understood the gravity of the situation and made allowances.

Finn chose to lie down on the lawn near one of our mango trees and essentially stopped paying any attention to any of us. The dogs would come individually to check on him, but there was little response. He did not give any signs of pain or distress so I just let him be. He died in the morning and the entire pack watched the gardeners dig a deep grave in the corner of the garden near a pomegranate tree where he liked to jump the wall to go greet visitors. The dogs were all extremely quiet for a few days, didn't even bark at people arriving at the gate. No one howled for almost ten days. We were all curious as to how the pack was going to take the passing of the leader.  Gradually, Rocky began to quietly take charge and direct Calypso and JC who would spend a bit more time together than they ordinarily would. Both of them became more solicitous in their greetings of Rocky as well. None of the dogs questioned the change in the power structure. Oddly enough as well, none of the dogs jumps over the wall from Finn's grave. 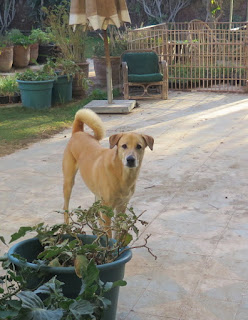