A Brotherhood Among Dogs 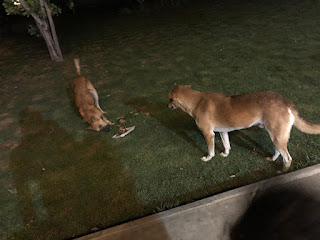 Our pack of thirteen dogs has its rules. Some of the rules they get from me, like "no growling in the house" but some of them come from the boss dogs. JC brought his girlfriend Marte from a dirt road next to us to the farm last summer. She came in all confidence and sureness, thinking that she was going to take over control with JC, but Calypso, who rules the house, was  having none of it. There weren't any serious fights but there was a lot of posturing and I scolded Marte for not paying attention to the pack structure. Gradually, she settled down and came to an agreement with Calypso that Marte will be a boss outside the house at night, while Calypso is sleeping on my bed ensuring that I can't sneak out. It all gets a bit Byzantine. About the time that Marte was adjusting to pack life, a new dog showed up. Peter Pan (just Peter for short, or F***ing Peter when I find him alseep on my dining room table) is young enough to be Marte's son, but we have no real idea. We managed to give him a rabies shot while he was being petted by Mariam, but he won't stick around during the day... at least not until recently. He is friendly but shy and sometimes can be petted but he's not keen on bathing as we found out the other day.
Our first clue that all was not well with Peter came when I found him asleep in a dark corner in my bathroom at about 9 am. I went to pet him, which normally is an indication in the morning that he should get a move on, but he just rested there. He'd lost weight, had no interest in food or water and simply wanted to sleep. Our vet and I conferred, and since he is wild, getting him a blood test or something was not going to be manageable, so we opted for giving him a wormer and a shower with shampoo containing sheep dip to get rid of fleas and ticks. He did not like the shower. As soon as he had finished soaking absolutely everything in the bathroom, he was gone. But he was cleaner and had been wormed.
Peter didn't come to my house that night. Instead he went to Beit Renenet where a family are renting the ground floor to do some civilised camping with their six kids while they consider the possibility of moving into our neighbourhood. JC, as he is a bit starved for the company of children with visits to the farm being still very slow between Covid, heat, and other obligations, has adopted the children and is generally over there supervising them, coming to the house for cuddle breaks and something to eat. The family told me that he, Marte and Peter were spending the night in the garden, playing with children before they go to bed and sleeping on the grass. They had also noticed that Peter had lost weight, so we asked them to try to give him a Vibramycin tablet in a piece of meat or cheese every 8 hours, as the best bet on what is wrong with Peter is that he's contracted one of the tick-borne diseases, virtually all of which respond to that medication. They told me how they had decided to give some food to Peter the night before and that JC's behaviour was really remarkable. They sent me photos that they had taken.
In the first photo at the beginning of the post, they had put a plate on the ground in front of Peter, and JC came over to check it out. Marte and BenBen were also there and wanted to have some. But JC began growling at them to keep their distance. Peter approached the dish in an extremely submissive stance and JC allowed him access. 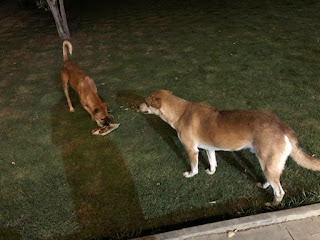 While JC watched over him, Peter cleaned up the dish of food. The other dogs just lay on the grass watching them. Our neighbours were fascinated. They had expected to see a fight break out over the food but no one challenged JC at all. JC also didn't attempt to eat from Peter's plate. One would imagine that he realised that Peter really needed the food. All of our dogs, Peter as well when he comes to the house, have access to food 24/7 because we have a dog door and leave trays of kibble near the water cooler where they can eat whenever they are hungry. Lately one of the farm rats has discovered that he/she is heavy enough to push through the flap of the dog door and I suspect is coming in to snack, so I believe that I will take up the trays just before I go to bed and close the buffet. Most of the dogs don't eat at night anyway, and if Peter is going to come over, he comes earlier. 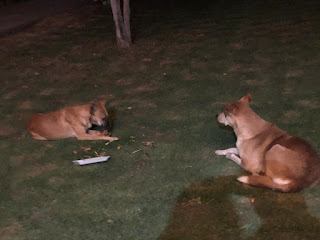 Once Peter had finished his food, the dogs all relaxed on the lawn in the coolness of the night. Our daytime temperatures are about 35 C on good days and You-Don't-Want-To-Know C on the bad ones, but because we are close to the desert and not surrounded by asphalt and concrete, the nights are generally comfortable.
The next morning Peter was still there sleeping in a semi-enclosed area next to our oven, and the family began giving him his medication in a piece of bread and cheese. He stayed in their garden all day yesterday and was clearly feeling better. 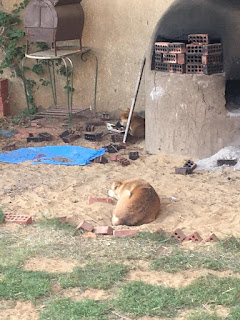 We  also had a traveler join us on her way hopefully to South Africa yesterday. She's a Dutch woman traveling in her car with her German Shepherd companion and she'd contacted me to see if she could camp here. Her dog is a spayed female, so I thought that the odds would be good that the dogs of the Renenet garden would accept her. JC, naturally, had to inspect her first, after which Marte, BenBen, and Ursula came over. Kaira, our Dutch dog guest, is fluent in dog and has a lot of experience in meeting strangers, so she handled things very well. I stayed around talking to Saskia while they all got acquainted. Interestingly, it was Peter who was most interested in playing with the new girl. JC is fine with the visitors, but won't let either Saskia or Kaira come anywhere near the children. He is fiercely protective of children without regard to whether we have requested it or not. Probably things will be even calmer today.
The longer I live with my dogs the more appreciation for the complexity of their social lives grows.
copyright 2021 Maryanne Stroud Gabbani
Posted by Maryanne Stroud Gabbani at 12:05 PM