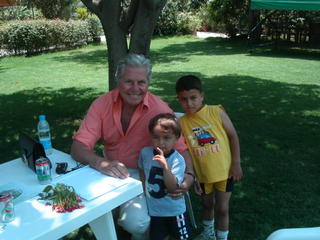 If this post sort of wanders around, well that's probably because that's what I've been doing for the past week or so. The photo on the left was taken in the nursery (of plants not kids) that will be one of my next door neighbours in the next few months. I've been negotiating and arranging my meager affairs for the past year in the hopes of buying a chunk of land nearby large enough to house my horses, the dogs, the parrots, a couple of goats, the water buffalo, some poultry and some rabbits. The nursery is about 7 feddan (almost equivalent to acres) with roads lined with mango trees, flowering shrubs, cactus gardens, herb gardens, and lawns wandering throughout the property where this picture of an Egyptian movie star, Hussein Fahmy, was taken with the sons of the manager, my friend Saber. I interviewed Hussein once years ago for a local magazine about the Cairo Film Festival which he organises. He's a charming, interesting man who studied acting and cinematography at UCLA back in the 60's. The boys, Ahmed on the left and Mahmoud on the right, are a couple of characters. Ahmed is in love with all things equine and with dogs, so he and I are good buddies, even if he is only two. His father has been helping with finding and buying my land, and just yesterday we signed the preliminary agreements and transferred the major portion of the money to buy my land. 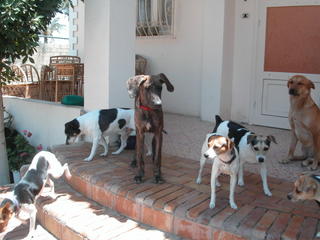 The dogs are going love having twice as much room as there is in the paddock area to play in. My friend Tracy is taking a half feddan plot next to me, so there are basically almost 3 feddan to use. Morgana the Dane is growing so fast that she's really going to need the room, I think. She now towers over her partner in crime, Daemon, but that doesn't stop him from attacking her and chasing her throughout the garden at every opportunity. Then, naturally, the two of them curl up together on the sofa for a snooze. These days are so hot that the dogs just spend most of the sunlight hours lying under the fans indoors panting softly, unless there is some water in the garden to play in. With sunset the temperatures drop significantly which makes it possible to enjoy our garden and watch the canines chase each other around the parrot cages. That's also the best time to do any riding or other activities out of doors 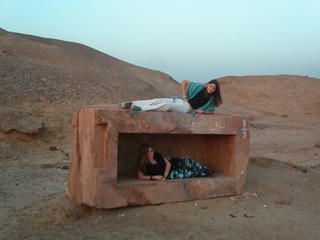 There is a magic to the desert in the summer evening. As the air cools it almost takes on a form, a silk scarf feeling, that caresses your face as it winds around the ancient stones in the sand. Not long ago a couple of my usual clients called me to ask if I'd mind making their normal ride a jeep trek because the daughter wanted to bring a non-riding friend who had never seen the pyramids in our area. We met at the paddocks and took off in my jeep for Dahshur at about 7 pm. Driving south down the Mansoureya Road we made our way through the water buffalo, donkeys, cows and children crowding the roadway on their journey home. Eventually we arrived at the lake just south of the Dahshur complex where we took to the sand to wind northward through the desert past the Black Pyramid, the Bent Pyramid, and the Red Pyramid towards Sakkara and Abu Sir. We stopped to explore rock outcroppings and to take some photos of the landscape. We've done this ride with the horses before during the winter, but this was a different experience. Driving a jeep in the desert is much the same as riding in that you have to judge the sand for its softness, you have to accelerate or slow down correctly to maintain your speed and trajectory, and you pick your way across the expanse without the benefit of a track. Sometimes I'd almost rather be driving in the desert than riding...especially when it is about 95 F outside and my airconditioning in the jeep is working just fine thank you. 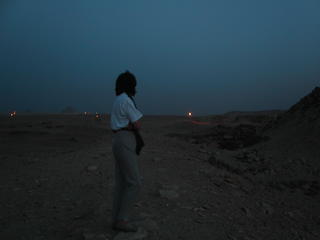 After dark the desert is all ours. We share it with the foxes, the owls, and the wind. The tourists are gone with their buses and taxis, not many horsemen are out riding at night. The light pollution from Cairo gives a dawn glow to the eastern horizon that persists all night, but the sky to the west is dark and filled with stars. It might seem that the desert after dark would be a bit spooky, but it isn't at all. The pyramids looming on the horizons are welcoming presences in their rather aloof fashion and there isn't anything else out there to worry about.


For the next month I must be patient while the crops that are on the land ripen and are harvested. I may have bought land, but the crops belong to the farmers. But that isn't a problem since the crops here change every two or three months anyway. The first thing will be building the fence to protect my neighbours' poultry from any stupidity of my city bred dogs, and a small brick house on the property will be finished to provide living space and tack storage for my grooms. Then the pipe corrals that I have on my rented land will be moved and set up to provide paddocks for the horses. With inflation the cost of the metal pipe has increased significantly over the past few years, so I'd be losing a lot of money to leave it behind. My neighbours next to my old paddocks want them to ensure that no one will build right next to their house, so the land will be paid for by them for a bit and then, I suspect, bought by them. Luckily, they have plenty of cash on hand for this. The goal is to have the horses, donkey and gamoosa on the new land by September 1, and then I can start building a home there for myself. Gonna be busy
Posted by Maryanne Stroud Gabbani at 10:16 PM 3 comments: