I'm boiling lemons for tea tonight, or maybe they should be called limes. Here they are limon, similar to the small greenish yellow limes in Mexico and they are the Egyptian cure for virtually everything. For cold or flu, you are supposed to squeeze some into a pot with water and then drop in the lemons themselves to boil with the juice. The oil from the skins adds to the potency of cure and with a drop of Jamesons it is a cold cure that will appeal to any Irish/Arab.

My guest left this morning for Jaipur, India, where she will spend a few months working with orphans. It was hard for her to go and I could see the tears in her eyes as she wheeled her cart into the airport. Sonia pointed out that she'd rarely traveled to some place where virtually everyone she met was welcoming to her. We talked on the way to the airport about the misconceptions that people have about Egypt...I have so many people emailing me to ask if it is "safe" to come to Egypt given "the way that Egyptians feel about Americans" for example. My response however is always the same. Egyptians have probably been welcoming tourists for about 5 thousand years and most of the reviews have been very good. I do know people who have had problems, but most of them would have had problems anywhere. 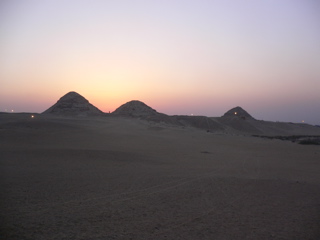 Before iftar I sat in my garden with my animals listening to the mosques leading up to the call to prayer for the iftar. The horses had been fed before the grooms went hoe for iftar so they were all busy eating in the paddocks. Hanuma our developmentally challenged baby gamoosa decided that it would be fun to chase the goats around their paddock. They can run so much faster than Hanuma that they are in absolutely no danger, but she jumped and bucked around them herding them into the shed with the sheep where they would no longer be threatening her dinner.

The terriers pattered around the land visiting the horses, while Morgana the Dane took up a position on top of a heap of sun-warmed sand by the grooms' quarters. Koheila ran up the hill for a quick tussle to establish the ownership of the hill...kids and dogs play King of the Hill all the time...while Sabah the Sloughi puppy crawled up into my lap for a nap. Egrets and crows flew into the distance to roost in the trees along the canals and a small brown owl called from the electrical wire above the bird cage. As the call to prayer sounded, the entire world fell silent but for the calls of the birds.

I think that I can be happy living here.
Posted by Maryanne Stroud Gabbani at 6:12 PM 7 comments: