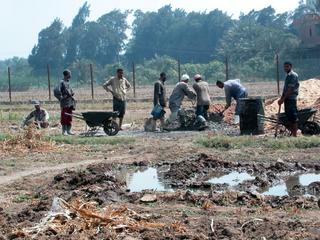 A couple of days ago I walked over to the land to check on progress. I found a couple of men working at digging trenches along lines that had been drawn on the soil in powdered lime, and another group of men mixing cement next to a large pile of sand and gravel. One man with a battered wheelbarrow was pushing loads of wet cement to the trenches where the wheelbarrow tipped its sloppy load into the trench to form the basis of the foundations of my new home. I'm building my house in the village fashion, which is to say, entirely by hand work and amazingly quickly. After watching the villagers put up a house with little more than some pencil drawings and powdered lime on the ground, one begins to believe that perhaps building pyramids wasn't such a huge task after all. 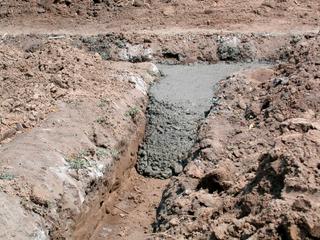 We have a very high water table in the Nile Valley, so foundations that go much deeper than about a metre run into standing water fairly quickly. This means expensive waterproofing for the foundations and such. For the villagers, any extra expense in building is a problem, making their situation and my own quite similar. So how do they build their homes? The walls are based with concrete set in trenches just under a metre deep. Then more concrete is poured on top of the base to create concrete walls that extend another half metre above the ground level. Brick walls are then constructed on top of the concrete, made of red brick with holes to improve the insulating quality of the brick. These walls are about 25 cm (just under a foot) thick. 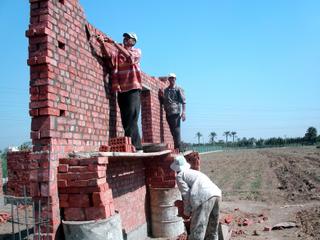 Today, after having gone to see the work progress yesterday afternoon, I went to take some photos of the construction. I'd been warned that I'd better take the photos soon, or I would miss the entire building phase. Yesterday I'd found brick walls to the level of my chest on the concrete base. Today the walls were almost at the level to connect to the (as yet nonexistent) roof. As you can see in the photo, the standards of on the job safety in Egypt are absolutely the highest. The bricklayers stacked...what else?...bricks on empty 50 gallon drums to lay old boards to form a scaffold for finishing the wall. This particular wall is the outside wall of my new living room. Once the level of the floor has been raised and the tile or stone floor laid, I will be able to look out of the window to my horses in their paddocks. 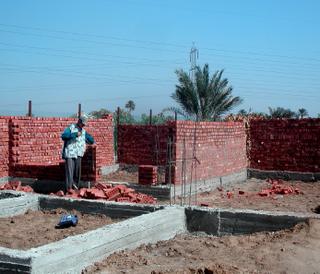 Although the methods used to build the house are simple in the extreme, they are effective. A simple lead weight on a string, a plumb line is used to check that the wall of the bedroom (at right) is straight. One of the most important issues in the construction of the house is to ensure that there is a good flow of air throughout. Since the prevailing winds come roughly from behind the young man in the photo, windows on the walls behind him and to his right are vital. This is not exactly a palatial mansion that I am building. If anything, it's even smaller than the shoebox that I'm currently occupying, but at least it will be mine. The living room is the room at the right with the front door at the point where the dirt comes up to the level of the concrete. The bedroom is just beyond the young man measuring with the plumb line, while the kitchen is the room just in front of him. The bathroom will be just to the left. 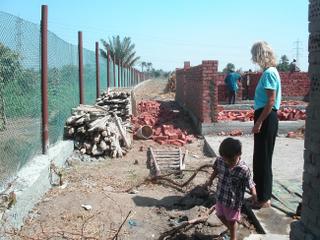 While the house is small, the climate here is lovely and just outside of the kitchen and bathroom will be a 25 sq. metre patio under a grape arbour where I suspect I will be spending a lot of my time. Behind the house is a small garden with a stairway to the roof of the house where eventually I will build a two room apartment for my daughter. She is going to have the best view in the place and a terrace from which she can look out over the horses, fields and the desert. Right now the garden is full of wood for concrete pouring frames and some old bricks, but once we finish building, I will plant bushes, grass and whatever will make Molly the Corgi and Schmendrick the cat happy in their private garden. An openwork brick wall will ensure that the other dogs don't go back there from the patio and harass them. Molly is blind and Schmendrick only has three legs. They don't need any more problems. The little boy in the photo is the son of the contractor building the house. He can't wait for me to move in so that he can come and ride the donkeys and the horses. Since he lives just down the road, I expect to see a lot of Ahmed Saber.
Posted by Maryanne Stroud Gabbani at 8:41 PM 2 comments: 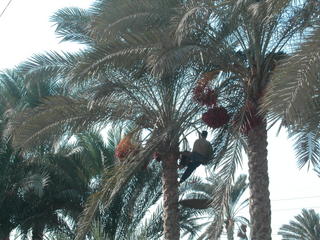 It's the first day of autumn and the temperature outside is 35 C or 95 F. Everyone I know is taking the afternoon easy if it's possible. But it is the time to get the fields ready for the winter berseem crop and the date harvest started last week. All over the countryside there are cornstalk shelters and walls being built to protect the drying dates from the predations of crows, rats, and youngsters, not to mention wandering cows who might like them too. And the cows are wandering in Egypt right now. We were riding in the desert an noticed a dark crowd of something on the sand about 100 metres ahead of us. As we got nearer, the horses' eyes almost bugged out of their heads because there in front of us was a herd of dairy cattle meandering along in the shade of the garden trees at the edge of the desert. My horses see cows all the time, but usually one or two or maybe four tied up in shelters next to their owners fields. They see cows being walked home in the evenings as the sun is setting, or they see a few cows walking out to the fields on the days when we go out riding early in the morning. But to see a group of about 30 cows walking along was a stunner to them. I have to give them credit; they didn't go nuts, spin and run off into the hills at the sight of all the bovine flesh on the hoof. But it was obviously a startling sight. I guess it's the first time I ever realised that horses can sort of count...at least in the sense that while one to four cows is fine, thirty is definitely overdoing it. 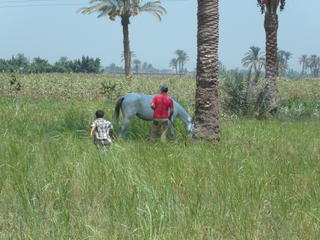 shore and flocks of cows and sheep grazing on the grass that will soon be covered with the water of the Nile. The authorities open the canals to the lake in the fall to provide water for the migrating waterfowl that travel south along the Nile, landing in the lake at Dahshur. This action is less out of concern for traveling ducks and geese than out of concern for the duck hunters from the military who use the lake in the late part of October. Still, they don't manage to shoot all of the birds by any stretch, so we can give them a bit of credit. This year I noticed the same herd of cows grazing in an empty field next to my land as I was visiting the site to sign the cement on the foundations of my house. I mentioned that I'd seen them in the desert just the day before and was told that they were visiting from Damietta. Now that is a stunner. Damietta is on the Mediterranean coast east of Alexandria, an easy 300 kilometres from here. And what are they doing here now? Apparently at the end of summer the cotton farmers spray their fields and to protect the dairy cattle from the spraying they send them walking the 300 kilometres north to Cairo where we don't grow cotton. As the spraying is done at the end of the summer when many of the summer crops are being harvested, the cattle have plenty to eat in the fields that have just been harvested. They make their way from field to field grazing on the stubble along the way. They'd been tidying up the fallen leaves and pruned mango branches from the gardens along the desert when we'd encountered them there. 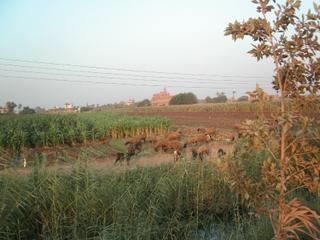 For the rest of us who aren't harvesting dates, it seems to be the season for a summer flu, something wonderful that begins with a sore throat and turns into a nice chesty cough. I've had it for the past couple of weeks and the only way I can make headway is to stay home and be inactive. The riding trip where we saw the cows was just a simple walking tour out to the Japanese Hill to check that we could still see Dahshur, Sakkara, and Giza from the top (we could) and back, but the next day I felt like death warmed over. Even the dogs seem to be getting it or a canine version. Two of the Rat Terriers have been coughing at night so that the house sounds like a TB ward and now the Dalmation is kind of mopey and coughing a bit. The vet is sympathetic and has offered suggestions to help the poor canines, but basically this is something that we have to ride out. Now how am I going to get the dogs to drink warm lemon tea?
Posted by Maryanne Stroud Gabbani at 4:41 PM 3 comments: