Learning From A Master 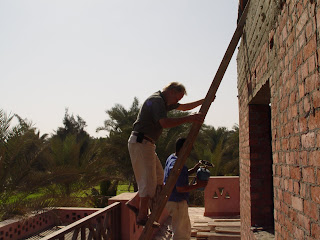 My neighbour decided that it was time to finish building his house and put a second story on it to provide a study for his wife and a spare bedroom. The project was complicated by the fact that when his built the first floor, he'd put a dome over the living room to help circulate the air and to evacuate the hot air that we are so good at collecting during the summer. He decided to remove the dome on the first floor and add one to the second floor immediate over the original to do the same job and to create a sort of atrium. His design was very clever since he planned the stairs to be built outside so that all the work could be done without breaking into the part of the house that he was living in during the construction. The final thing to be done would be to break the original dome and put a railing around the space where it had been. He brought the same master bricklayer who had built the original dome to build the new one and Tuha, the bricklayer, brought his son to help and to learn how to do the work. 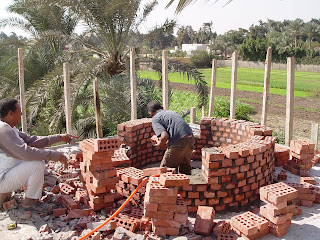 Tuha is a marvel. He built my barbecue for me, entire buildings for others and a gorgeous barbecue for a neighbour. You describe what it is that you want and he simply constructs it free hand. After watching ordinary construction workers, you realise that you are watching an artist. The only way to learn to do this is by doing it and his son is learning the family business after spending a number of years in school to learn to read and write. While this may seem strange, it does make some sense since the schools in the countryside are really nothing that marvelous and having a skill like his father's will assure him a good living. 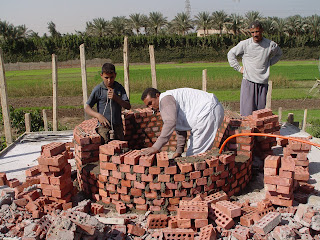 Tuha, having built the main dome, put his son to work on the smaller dome for the stair well. Under his guidance the boy learned how to place the bricks precisely in place to create a slowly decreasing circle of brick that would form the dome. They work from the center of the dome standing on a wooden platform that closes the space beneath them. This platform will be removed when the dome is completed. This method of construction is the traditional architecture of Egypt and is cheaper than the non-traditional forms. A building made with the domes and barrel vaults from brick without concrete columns cannot easily be built upon to make a second floor, however, so many people like my neighbour mix it with the modern construction, making use of the air conditioning features of the dome and vault. And it never hurts that they are beautiful as well.