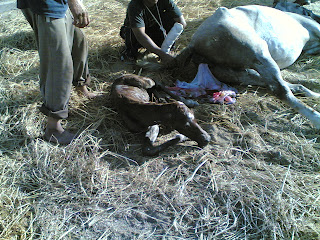 Last Saturday we had a small miracle happen at the farm. I've had two mares standing around becoming more and more rotund by the day. Everyone visiting had their own idea regarding whether Shabboura (Fog in English) or Lily (My Night in English) would deliver first. Well around 3 pm in front of the entire farm staff and about 5 visitors, Shabboura lay down in her paddock and proceeded to have a baby. Horses just don't do that. They like to have their babies in private as a rule. They wait until 3 am or some such horrible hour to foal. But not Shibs. No, she had to have an audience and plenty of attendants. 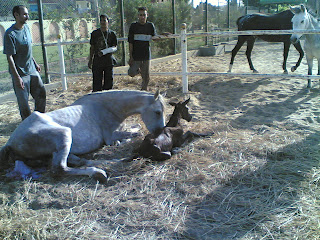 Foaling usually isn't a long drawn out process. For wild horses, it couldn't be because the mare and foal are at extreme risk during birth. True to form, it was only about 30 minutes from the first sign that she was having labour pains (puzzled looks at her stomach and flanks along with some sweating) to seeing the nose and front feet of the foal start to emerge. A couple of the grooms came to hold the foal's legs and then shoulders so that it didn't slide back during contractions. Once the foal was on the ground they helped to remove the placenta from the face, announce that we had a filly, and then move her to near the mother's head so that she could clean her up. 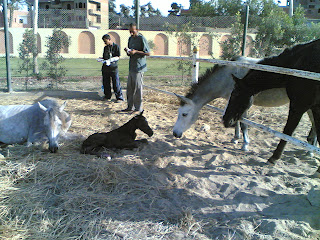 Shabboura's human audience were utterly enthralled by the birth. At some point I will have some photos from various real cameras, but I had to make do with my Nokia. Lily watched the birth very calmly from a corner and after the filly, who I decided to name Shams (Sun) had dried off Lula the mule and her buddy Jack leaned over the paddock fence to welcome her. When Diva had her filly about six months ago, Shabboura was the other mare in the paddock and Lula and Jack were just as interested. 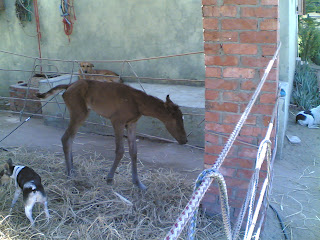 We got the Shams to do the all-important early nursing that gives the foal immunities acquired by the mother, gave her an enema to move the meconium out of the filly and left mother and daughter together to get to know each other overnight in a quiet box. But the next morning it was apparent that all was not well. Shabboura was edgy, didn't want the filly near her, and there wasn't much available in the way of milk. We called a vet who came by later in the day, checked out Shabboura and told us that somehow she had a nasty infection in her udder and that the filly couldn't nurse from her mother. We'd started supplementing Shams' milk supply with goat milk, but most of the goats in the area are about to give birth and there isn't a huge supply. Some people will supplement with baby formula so we bought a few cans of a recommended brand and until we could get that out to the farm, we gave her some local skim milk from a baby bottle. 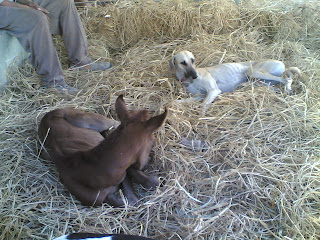 Shabboura was moved back to her paddock with Lily which is close to the grooms' room so that she could be monitored in terms of temperature and administration of some pretty hefty antibiotics. We felt that we could hardly lock poor Shams up alone in a box...since none of the adult horses are forced to live in them..so we constructed a small paddock right next to the boys' room. After creating a frame of rope, we moved in hay bales to build walls and then spread an thick layer of hay on the ground for a warm and comfortable place for the filly to sleep. The dogs very quickly decided that the hay was indeed a comfortable depth and moved in to help the filly sleep. 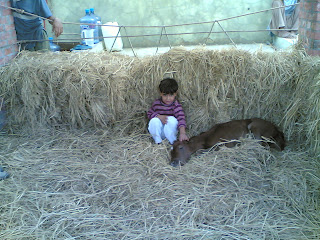 One of the hardest things about having a bottle fed baby is the frequency of feedings required to keep a small mammal alive. Shams needs about half a litre of milk every two hours or so, and I thank heaven for my grooms who are taking turns at doing it each night. They make up their bed on the mastaba bench that is next to Shams' hay paddock so that it's easy for them to get up to feed her the two bottles that are required. Waking up to feed her isn't that difficult. Shams can be pretty persuasive. She's figured out that humans are great because they provide food and that dogs can be both entertainment and warmth. This one is really going to be fun to raise. 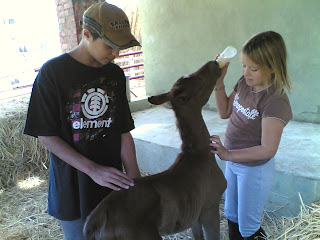 Today we had some of the school kids in for a riding lesson and the grooms made sure that they had a bottle of milk to feed to Shams. She's not at all fussy who holds the bottle as long as they hold it. In a few weeks she's going to have to have another home, but it's possible that if the infection that Shabboura has clears up properly she will be able to go in with her mother and perhaps with Lily and her foal. We have a couple more paddocks under construction for this. 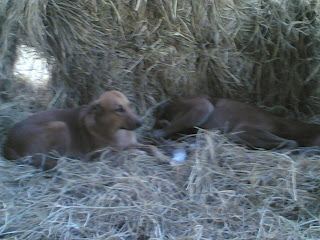 Shams is the sixth foal to be born here. All the others have been "normal" situations where the mare did most of the work for us. This is a new experience, because even if she should be able to return to her mother, Shams identifies very strongly with humans and dogs now, much more than the others ever did. I wonder what this is going to mean. Wadi, Fagr and Negma have grown up in the herd, while Nazeer and Nayzak were born in a boarding stable and lived with their mothers in boxes. Herd foals are much more socially adept, but the first two colts had a lot of paddock time with their mothers and the advantage of sharing an extra large box with both mares. This year's crop of foals is going to be something else.