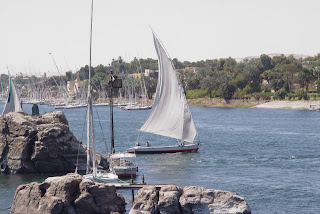 This has been a week for old friends in many senses of the word. For the past year, one of my childhood friends has been working out the details of a visit to Egypt with her husband, a woman friend of hers and the woman’s husband. At the very last minute, her friend’s husband couldn’t make it on the trip and we had to reorganise a few things. They had planned to come to Cairo for a few days to see some things and catch their temporal breath at the farm. Flying to Egypt from California does really knock one’s time sense askew in a big way. Then they had booked five days during which they would take a three day cruise from Aswan to Luxor with a following flight to Sharm el Sheikh for a couple of days. When one of the party couldn’t come, they invited me to join them and after working out the logistics of getting away from the farm and work for five days, I did. We flew up to Aswan early in the morning to catch the Movenpick Royal Lily, a lovely boat for a vacation. The rooms were beautiful and the food was great. Each day we visited some of the sites along the Nile between Aswan and Luxor and in between we would sail along some gorgeous countryside. It was my first Nile cruise, despite the fact that I’ve lived here for about twenty years. 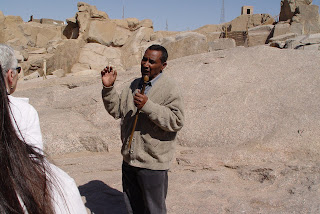 In Aswan before we sailed, we hopped into a minibus with a guide to visit three sites, the unfinished obelisk, the Aswan High Dam, and the Temple of Philae. My only other visit to Aswan was in about 1992 with my brother and his family at New Years. We had driven up from Luxor (this was in the old days when you could still do that easily) and we opted to see the High Dam, Abu Simbel, which involved a flight from Aswan and back, and a felucca trip to the west bank for a camel ride. This trip involved seeing two new things and revisiting one old friend. The High Dam hasn’t changed much and standing on top looking out at Lake Nasser was a familiar sight. The site of the unfinished obelisk, on the other hand, was totally new and interesting. The site is an enormous granite quarry, where for thousands of years the ancient Egyptians cut the famous red Aswan granite for pyramids, obelisks, and other statues. I’m not sure how many of you have had to buy countertop for a kitchen but Aswan granite still goes for a pretty penny in the market today. The unfinished obelisk is a 42 meter slab of granite that cracked as it was being carved and was then left in place. Undamaged obelisks were carefully removed from the site of their carving and placed on barges that could be floated to the Nile directly from the quarry via a canal that’s only recently been discovered. 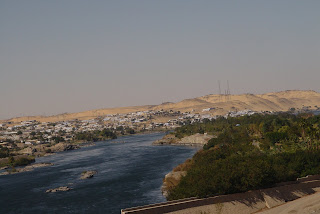 Driving from the quarry to the High Dam we crossed channels where the Nile flows out of the dam and some of the old rocky empty channels that are used for excess run off. Aswan’s main characteristic is the amazing amount and variety of rock. The High Dam hasn’t changed in the 16 years since I was here last. It’s still high, still windy and the view of the lake is still lovely. The jury is still out as to whether it was a Good Thing or a Bad Thing as well. In addition to losing many important archaeological sites to the lake, Egypt and the Mediterranean Sea lost the important silt that was washed down the river yearly. This has cost the farmers of Egypt a lot and the fishermen of the Med perhaps even more, since the silt gave nutrients to the fish of the area. At the time that they were building the dam, no one was interested in ecological impact statements so we are pretty much stuck with the results. 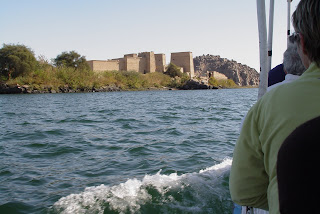 Our next stop was one that I’d wanted to see for ages, the Temple of Philae which is between the old Aswan Dam and the High Dam. Like many sites in this area it has been relocated to keep it from being lost in the waters, but unlike Abu Simbel and others, the relocation didn’t involve that much of a move. It was built in Greco-Roman times to honor the goddess Isis, whose tears over the loss of her husband/brother Osiris were believed to be the source of the Nile flood. The carvings there are beautiful and interesting, as the Greeks who were then ruling Egypt added their own little touches to the décor. 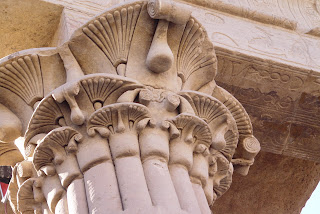 The juxtaposition of the huge raw boulders of the river, the harsh stone of the riverbank, and the lovely workmanship of the temple were a marvel, as were the warm tones of the stone and the cool clarity of the unpolluted sky and the sapphire of the lake. 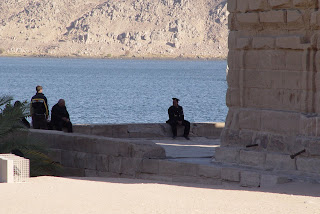 I grew up near the sea and any time spent by water always seems a blessing, twice so in the desert like the high deserts of California or in Egypt where water that pours over the hot rocks gleams with a light more lovely than any diamond.

We returned to the boat where we laid into dinner with the special gusto of those who have been hiking over rocks and learning more than they’d bargained for as the boat sailed for Kom Ombo. 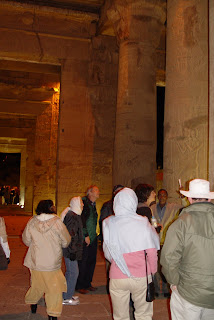 Kom Ombo is the site of a temple to the crocodile god Sobek and to Horus. Apparently this area of the Nile was notorious for its crocodiles and one reason for the temple was to try to encourage the crocodiles to play nicely with the locals, while on the other hand Sobek was a fertility god and this seems to have been a temple for the practice of medicine. There are carvings on one of the walls that detail medical practices and tools. We visited the site by moonlight as there was a full moon, at least a 10 on the romance scale. 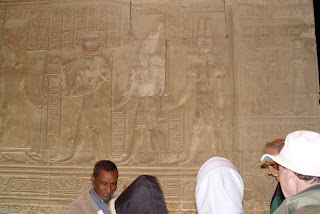 There was plenty of light to see the carvings between the moonlight and the illumination provided by the antiquities staff. As we walked to and from the temple along the Nile embankment, I was struck with the loveliness of the night (definitely the most powerful feeling) and with the enormous numbers of visitors to this part of Egypt. There must have been at least ten cruisers the same size as ours tied up along the river bank and in many cases they were moored in flotillas at least three deep. That night we slept the deep sleep of weary travelers who had risen at 3 am to spend a day time traveling on the river.