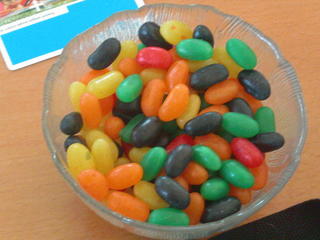 Tracy is tall and skinny. Oh well, we can't all be perfect. She also has a sweet tooth and an appreciation of jelly beans so she was delighted to find that the nut man in Maadi carried jelly beans as well and she buys them by the kilo bag and then puts them in a bowl on my desk so that we all can enjoy them...like I need to be enjoying jelly beans! The red ones are the first to go since both Tracy and I like them best, then the yellow ones, the green ones and the orange ones. The black ones all get eaten by Morad because neither of us like licorice much. We haven't figured out what flavour the green ones are yet...some kind of flowery flavour that isn't lime. The biggest problem with the jelly beans, other than the inherent damage to my diet, is that you have to dust your jelly beans in Egypt if you leave them in an open bowl. So every now and then I find Tracy sitting with a Kleenex dusting her jelly beans. Of course. It makes all the sense in the world.
Posted by Maryanne Stroud Gabbani at 5:32 PM 4 comments:

The Importance Of Being 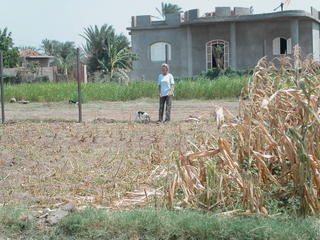 The new land is moving along these days. Workers spent the last five days putting in pipe to hold the wire mesh fencing around the land and between Tracy's garden and mine. We have roughly 2.5 metre fence set in concrete, not for our security but for our neighbours. Most of the families here raise free-range chickens, geese and ducks, and I can't see myself being able to gently explain to about 15 Rat Terriers that these enticing moving targets are really not to be enjoyed. As well, I like to know that if horses manage to open their paddocks, they aren't going very far. The main road isn't that far away and if one gets out during the night, I'd rather not find that it met a dump truck or something. I've been out walking the land a few times a day to see what all is happening there. The well diggers have the equipment there and started the process of digging our well in the corner near the storage room that is already on site. It will take a couple of days to dig the well since the work is all done by hand and gravity. They set up a tripod over the spot for the well and hoist and then drop a heavy iron pipe in the place. This gradually eats away the soil underneath and excavates a hole that eventually will be about 22 metres deep. The initial few metres are soil, then there is a gravel layer and a rock layer. It's hard work and the men who do it are tough and wiry. 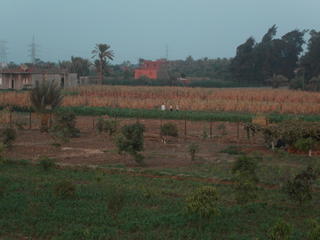 There are still crops on the land and the young men who work for me caring for the horses are busy every day harvesting the corn stalks for the animals. My grey donkey, Margarita, thinks that this work is just fine since she gets to go and stand in the corn eating all she can while Ahmed, Medah, and Saad cut down and stalk the rest in the wagon to be taken home for the other equids and Gameela the Gamoosa. I've also made my first income from the land, a sale of ripe hot peppers for about LE 37.50 (divide by 5.7 for the USD rate). I have masses of the peppers in the house awaiting consumption by the parrots (who adore them) and pickling so that I can torture all my friends by giving them pickled peppers. Torture by fruit and vegetables here is a fine Egyptian farming tradition, as it is in other rural parts of the world. A friend of mine from Vermont tells me that late summer is the only time of the year that her neighbours lock their cars, and that is to keep other neighbours from giving them squash by placing baskets on the front seats. I can understand that. Today I was given a box of mangos by Cristina, my boarder at the paddocks. Her husband is a physics professor at the American University in Cairo, but he is also part owner of an island devoted to mango production and each summer a pickup truck full of crated mangos arrives at Cristina's doorstep so that she can give them away to unsuspecting friends and family. I have to admit that being attacked by a crate of mangos is a pretty decent fate. 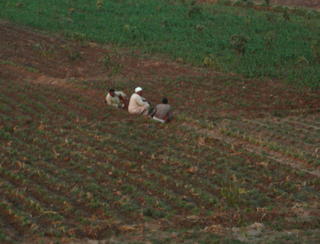 Our work seems to be supplying my neighbours with plenty of entertainment. Children wander through to watch the men stretching the wire, farmers stop by to pass time with the well diggers, and everyone is getting used to Morgana the Dane gallumphing her way through the corn stalks in pursuit of Koheila the Dalmation. I fully expect that we will be entertaining the neighbourhood for some time until they decide that we are boring. Plenty of people who build weekend houses out here build brick or stone walls around them for privacy, but the solid walls break up the wind flow, which is so important to everyone's comfort. Tracy and I prefer the wire fencing which is tough enough for dogs and horses and once some interesting vines are planted becomes quite pretty. We'll be choosing the vines in the next week, I imagine. Some bouganvilleia would be nice and there are others that will do a good job. The plants do a double duty of providing some privacy and actually cooling the breeze as the wind cools when it is filtered through the smaller spaces between the leaves. We have a meeting scheduled later this week with a man who helped Hassan Fathy, a famous Egyptian architect who designed buildings using the old techniques of airflow and heat reduction. He will probably be providing the crews to build our houses since we both want to build in as energy-efficient manner as possible. Thank heaven that the summer is ending and the weather is cooling off. Nights are a very comfortable temperature these days and the mornings are misty and cool, reminding me of the early mornings in the high desert valleys of California where I grew up. Funny how the mist on the grass can bring back all the feelings and senses of the first days of classes in high school so many years ago. 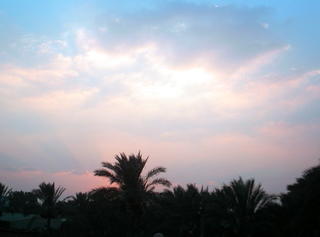 This morning I was reading my emails from two riding lists that are based in the US. Many of the posts on both lists were concerned with the welfare of horseowners in the New Orleans area where hurricane Katrina is supposed to hit hard. According to news reports online, as many as a million and a half people have been evacuated from the New Orleans area in preparation for the storm. Evacuating people and household pets is never easy, but for people with larger livestock, the issue of where to go is a serious concern. Other list members in states near Louisiana were posting addresses and phone numbers as well as instructions on how to get to farms and stables where families with horses might be safe. I was trying to explain a hurricane to Sabrine, the seventeen year old from our village who works here helping out around the house. She's seen pictures of snow on television and on my computer and finds it hard to believe that this just happens by itself and then goes away by itself. The concept of a hurricane is pretty hard to digest in a country that essentially has no weather other than warm, chilly and sunny with very occasional showers. But I daresay that the news programs here will have pictures later tonight. 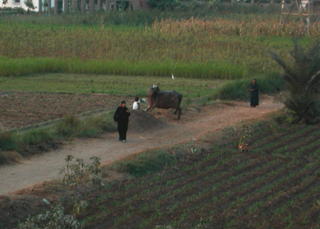 A funny thing happened while I was reading some posts about the Egyptian blogging community. One site was talking about the various blogs and mentioned mine but commented that I tended not to talk about the problems in Egypt although there are plenty, instead painting a sunny picture. The comment rather bothered me, I have to admit, and I've spent some time wondering if I'm being too cheery, but on reflection, I don't think so. I remember the winter of 1967/68 when I was a freshman at the University of California at Berkeley and everyone in my small town in southern California was very, very concerned for my welfare given that there were student riots on campus every day. After all, they saw them on the news every evening...students waving banners and tossing bricks in protest against the war in Viet Nam. The only problem was the fact that I never got to see one single riot because I had an important 12 noon class every day and all the "riots" were at lunch time. There are problems everywhere in the world. I know people who are terribly distessed over the state of government in the US, but they don't spend every waking hour talking and thinking about it. The fact is, the problems in this world get the air time.... disasters, hurricanes, demonstrations, brutality, war, and so on. Most of us live our lives worrying more about whether our kids are going to do well in school, how our jobs are going, whether the dogs have fleas, and how the price of vegetables is rising. Life is pretty mundane and generally quite enjoyable on the whole and I suppose that someone should chronicle the pleasant trivialities. Sure, Egypt has problems. We are in the midst of an "election" that may or may not actually change something. There are police having all sorts of difficulties in the Sinai with people leaving around mines for their cars (not at all a friendly act). Literacy in the villages is still low and disease is still high. But other than maybe the poor sods in the police force who are tiptoeing around the rocks in Sinai hoping not to be blown sky high, most of us are still laughing at children, enjoying the evening freshness, telling jokes, and storing memories as we grow older. No apologies here.
Posted by Maryanne Stroud Gabbani at 5:07 PM 5 comments: