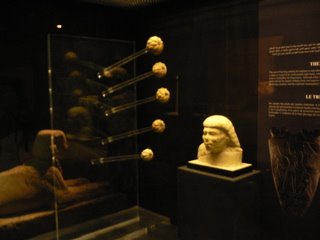 I had a chance to see one of Egypt's new jewels today. My friend Nathalie came to ride, and we decided to go to the new Imhotep Museum just inside the main gate of the Sakkara complex. I have a wonderful trail that wanders through the fields and ends at the entrance to the Sakkara antiquities area. In the past, I'd ridden up to the main gate with friends, been asked to pay the entrance fee and we'd gone in. If someone wanted to visit one of the sites, the others would hold the horses while the visitor looked around. Often we would leave through the desert to return. Lately I'd gone to the main gate and been refused entrance even when we offered to pay the fee with the guard saying that horses were a security risk. Considering that they don't have the trunk space of a Peugeot, I could never really figure that one out. Nathalie, however, has a diplomatic pass and no one said a word. 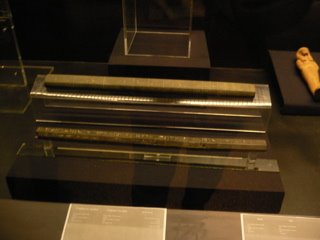 I'd seen the museum as they were building it below the hill that the cars climb into the Sakkara complex and had ridden past the construction site a number of times. This time we rode down the driveway into a carpark that was not very crowded. We were asked for Nathalie's pass a number of times, each time the official looking in disbelief at the horses. We found a kind soul who was willing to hold the horses while we checked out the new museum. 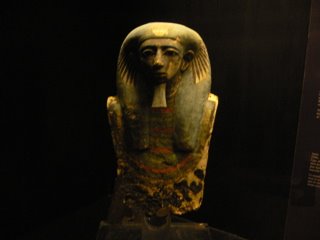 Double glass doors parted and we walked into a welcome wall of airconditioning. The museum is in honour of the pharaonic patron saint of the Sakkara pyramid and all the other pyramids, the architect Imhotep who designed the step pyramid for King Djoser so many thousands of years ago. Unlike the cluttered Egyptian Museum, the exhibits are sparse and for the most part well-labeled. The labeling process is still underway and we had to ask one of the employees to confirm our suspicions that the stone rods in the second picture here were in fact measuring rods. Now you know how they measured the pyramids. 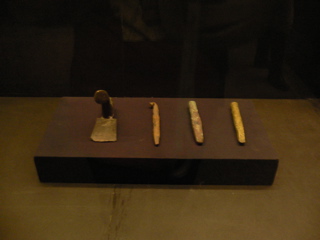 Throughout the darkened rooms, glass cases of artifacts were lit to show the stoneware, the tools, the decorative objects and parts of some of the walls of the Sakkara complex. Some of the tools shown are essentially identical to those that I see workmen carrying today. The continuities in Egypt are both frustrating and charming. 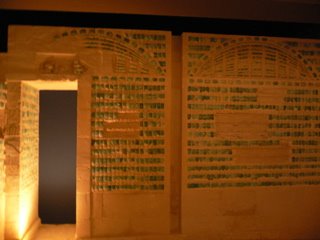 One of the exhibits was particularly welcome to me. A couple of years ago the History Channel contacted me to supply them with horses for an episode of "Digging For The Truth". My horses appear (most beautifully I must say) in perhaps all of two minutes of the show, but at one point the narrator was interviewing Salima Ikram who was showing him the faience tile wall in the interior of the Step Pyramid. The interior is too unstable to allow visitors for the most part, so they've taken a part of the faience wall and reassembled it in the museum for visitors to enjoy. The blue pottery tiles were created to replicate the mats that used to hang on the walls of the houses of the time. The turquoise tiles are lovely in the limestone walls. 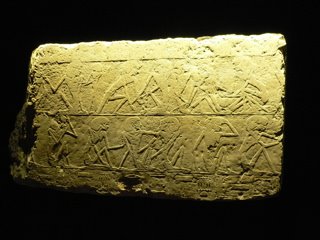 One of the most stunning pieces in the museum is a frieze of starving Nubians that were carved to commemorate the pharoah's visit to Nubia. The people are carved in exquisite detail in the most difficult style of frieze carving, excised from the background layer. This means that the important figures are standing out from the background and the artist had to do much more work to carve everything else away. It also allows for much more detail, in this case the pinched faces and prominent ribs of starving people. This is the only depiction like this that I've ever seen and Nathalie as well found it extraordinary.

The other room that was very impressive, but of which I have no photos because my battery died, was the Lauer Library. This is a reconstruction of the library that existed in Lauer's house at Sakkara where he worked from the time he was about twenty years old until he was almost one hundred, excavating and reconstructing the Sakkara complex. You can see his desk with some of his writings and the book cases with his reference books and those that he published about the site. His career was one of the most impressive in the history of Egyptology.

When we left the cool of the museum, a wall of heat from the desert, the counterpart of the climate control of the museum, hit us like a truck. More visitors had arrived and we looked around for the horses, finding them parked along with various cars and buses in the parking lot. Nathalie was going to be late for lunch with her husband and the weather was turning windy and hot, so we made our way back through the fields to the farm, and none too soon. I brought the dogs home with the intention of going into Maadi to see a friend, but phone calls and small chores interfered with my departure until with a roar a sandstorm descended on the house from the desert. Palms bent almost double and I could barely make out the garden fence from my front door. The power went out and the sky was so dark that I went about lighting candles. The dogs and I sat indoors hiding out and feeling sorry for the parrots who actually didn't seem terribly bothered by all the racket. Now we are simply hoping that it will all blow over tonight and leave us in peace.
Posted by Maryanne Stroud Gabbani at 10:33 PM 5 comments: