While my hands were healing from spider bites, it was pretty hard to ride horses, so thoughts turned to other projects that we wanted to pursue. One of the things that I'm wanting to get for the farm is a donkey cart that is built for driving with just two passengers. It would be so much more practical for local trips in the neighbourhood, along with being, most importantly, a lot of fun. I'd been told that an ironworker at a local art centre could probably help me make a cart based on a photo of one that I'd downloaded from the net, so I set off with my trusty Mohamed Said to make his acquaintance. 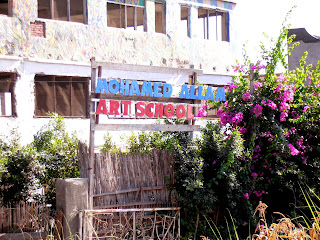 Not far from the farm on the Mariouteya Road is a place commonly called Fagnoon, after two Arabic words: Fanan or artist, and Magnoon or crazy. The crazy artist who established this wonderful place is otherwise known as Mohamed Allam. He decided that the children of Cairo needed a place where they could let their imaginations run riot...and in the process created a marvelous space where their bodies could be free as well. 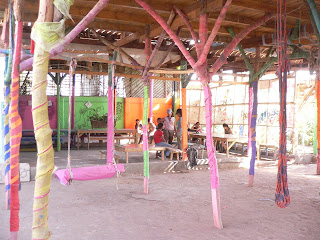 The centre itself is a creature of constant growth. Platforms, balconies, walkways, and bridges connect spaces where children of all ages can paint, draw, work in wood or fabric in shade and sunlight. The meandering walkways invite exploration and an obviously handmade bridge curves over the canal to a garden where pottery wheels stand under shades and a pen of goats watch the activities with interest. Papyrus has been planted in the canal so that papermaking activities can also be pursued. This is one of the few places that you will see the plant that was so much a part of Egypt's history growing. The day we came, workers were constructing a third level to some of the centre, giving visiting chilren many metres of wall to paint and decorate. 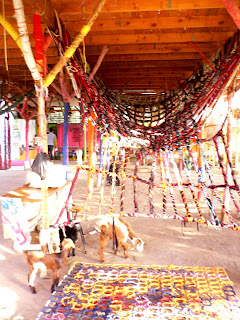 With so many of Cairo's children living in apartments, a space where not just spirits but bodies can run free is a joy. In one area a net of multicolored fabric hangs from the ceiling ending in a slide down which children can slither onto a pad of mattress springs also wound in fabric. The center is full of objects that can be climbed over, into and under. 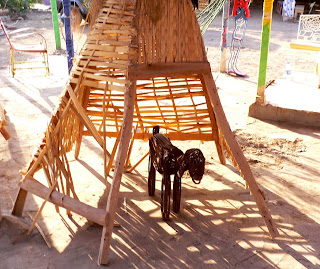 Adult art activities are also encouraged here. The hadad, or iron worker, that I'd come to see has created animal statues that are found randomly around the centre. A goat stands in a teepee framed in wood and woven from dried bullrushes from the canal. A vividly imagined pair of ducks and some ducklings gather in a shady corner near a column that is constructed of natural wood in the shape of a tree. While we were chatting with the hadad and the centre's owner, a group of college aged students ran about on an upper level pelting each other with water balloons. Paint streaks on tshirts and jeans showed that having a water balloon fight wasn't the only activity of the day. These young adults have been coming here since the time that they were school children being brought on excursions from the classroom. My grad student daughter is one of Fagnoon's biggest fans and was fond of spending an afternoon out there. 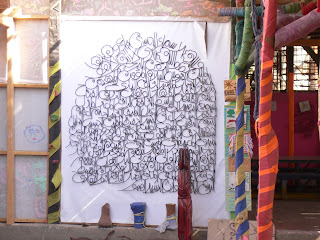 Mohamed Allam is a good director for such a centre, being an artist himself who creates beautiful and interesting work. A gallery for his work is part of the complex and his handiwork is everywhere, in statues scattered about, iron wall hangings and beautiful and innovative furniture created in wrought iron and wood,fabric or other materials. 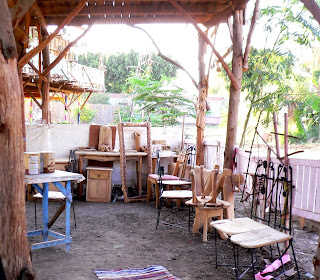 A trip to Fagnoon should be compulsory for Cairo residents. Parents can relax under a tree if an artistic endeavour is not on the menu, kids can run amok happily, and resident bakers offer refreshments such as fateer, a flaky bread eaten with sweet toppings such as clotted cream, nuts and honey or with savoury such as cheese. There are even outdoor taps and showers to clean off all the grubby little Van Goghs after a day creating. Just recently another branch of the centre, Fagnoon Fellah, has been opened even closer to the farm. This centre offers space for camping overnight near the village of Abu Sir on the Mansoureya Road, within hiking distance of the original centre. The centerpiece of the new establishment is an enormous net hung from the trees, providing enticing spaces for climbing or just settling in with a good book. More information can be had by contacting them at fagnoon@fagnoon.net or phoning 3815-1633.