A Walk Along A Mameluke Street

A couple of weeks ago a close friend of mine, Patricia Canfield, decided to take one of the walks in Cairo sponsored by ARCE (The American Research Center in Egypt). ARCE offers some amazing tours of Cairo and sites further afield for very reasonable prices. You do have register with ARCE beforehand and to show up on time for the bus as they absolutely depart at the advertised hour, but the tours are some of the best in Egypt. Pat is a freelance writer living here for some twenty odd years and when she showed me the photographs and told me about the places she'd seen, I begged her to write it up for me for my blog. These days my arthritic knees have taken me away from any ideas I have of three hour walks, although knee replacement surgery scheduled for this summer should have me back pounding the pavements, however gingerly, in the fall. Here is her story:

One of the highlights of tours to Cairo is the Khan El Khalili which is an intricate warren of over 1,000 shops, craftsmen and workshops and an astonishing group of Medieval and Islamic monuments which have occupied the same cramped area for well over 1,000 years. 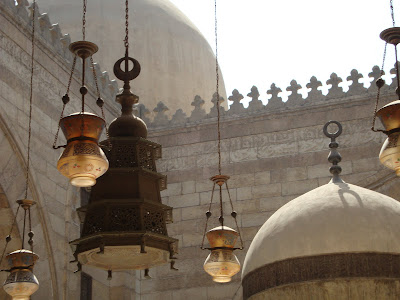 The most spectacular group of these monuments is on Al Mu’izz Street which is part of the main thoroughfare that ran through the Medieval walled city. It is an area called Bayn El Qasrayn (Between the Two Palaces). This was the Mameluke (1250 – 1517 AD) ceremonial parade route which ran between the two palaces of the Royal complex. At that time it was said to be wide enough for 10,000 troops on horseback to pass. These palaces were built on the site of the earlier Fatimid (969 – 1171 AD) era buildings which were the heart of what was then the city of Al Qahira (Cairo). 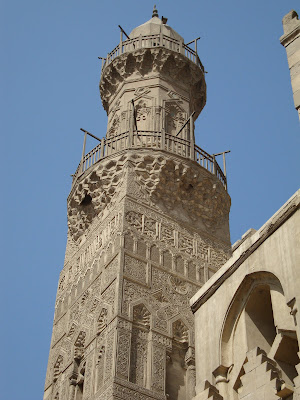 An extraordinary group of these monuments was painstakingly restored and has recently been reopened to the public. These three adjacent complexes below were built by Mamluke Sultans who traveled extensively during military campaigns and incorporated much of what they saw into their own buildings.
The oldest complex was built by Sultan Al-Mansour Qalawun (1279 – 1290) and is a magnificent grouping of the highest examples of Islamic architecture. 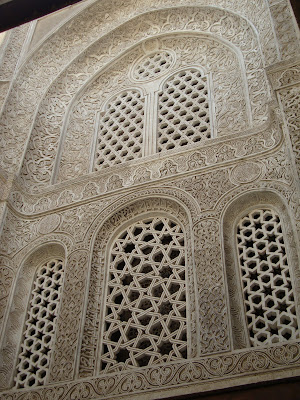 It included a Maristan or hospital that handled hundreds of patients each day with a highly specialized medical staff and surrounded the patients with beautiful gardens and soothing musicians. An eye hospital still exists on the site. There was a Madrasa or religious school. 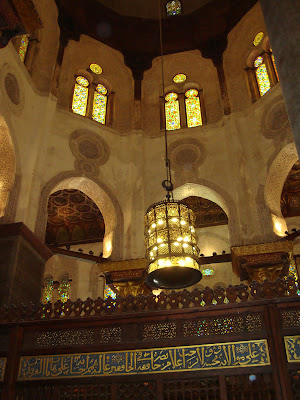 However, the most spectacular feature is the Mausoleum which is an absolute treasure trove of marble inlay, intricately carved gilded wood, Islamic calligraphy and stucco that looks like lacework and which houses a cenotaph with several royal burials.
The next building was constructed by Qalawun’s son, Sultan Al-Nasir Mohamed, who was one of the most prolific builders in Cairo’s history. A white marble Gothic style doorway that was brought from Syria opens into the passage which separates the Madrasa from the Mausoleum. 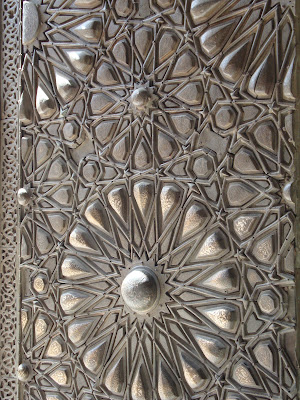 The door to the entrance is well-aged silver and marble inlaid floors form a carpet like passage between areas. Colored stained glass windows play with light and color throughout the buildings.
The third building of this contiguous façade is the Khanqah (Sufi monastery) and Madrasa of Sultan Al-Zahir Barquq (1382 – 1399). 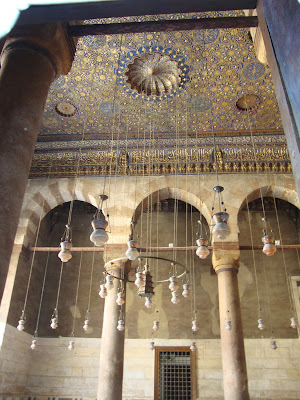 There are exquisite examples of gilded Arabesque stalactites on the domed ceiling and bands of Koranic inscriptions stretching across the walls of marble inlay and carved Mashrabiyya wood. Colored glass mosque lamps are hung from chains in graceful groupings.
From the street, you can see the interplay of light and form in the recesses which give so much texture to the buildings and the minarets that top the structures are a study in different styles of design and calligraphy. It is a place that constantly affords you a new sight to study and a new treasure at which to marvel.