The Second Day on the River 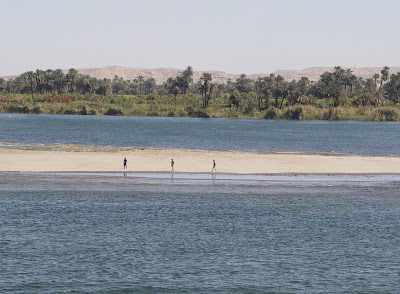 The next morning we had breakfast at Kom Ombo and then set sail for Edu. This was my favourite part of the trip, heading down the Nile with the northwind in our faces. We passed farms much like those of my area, and fishermen working their boats in the river while their children played on sandbars nearby. Mango, orange, and banana orchards lined the river, but the date palms here in the south were not as well-trimmed as those in our neighourhood. 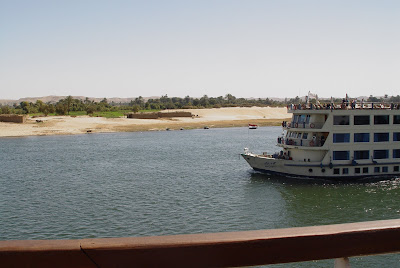 We weren't the only ship on the river. In addition to the fishing skiffs, there were some smaller motor craft for travel or cargo and, of course, other cruise boats. Since we were all supposed to be going through the locks at Esna that evening, sometimes things looked like an old fashioned river boat race. The weather had warmed up quite a bit, but most of us were looking abit askance at some of the travelers on other boats who were sunbathing on the top deck. Maybe our boat was colder on the topdeck or something but we were quite happy in tshirts. 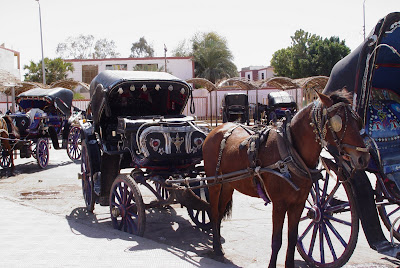 When we got to Edfu we were told that we would take a horse-drawn carriage to the temple and back. To my delight, the majority of the horses presenting themselves to us at the riverside were in excellent condition. As a horse owner and someone who works with horses, I really can't tolerate working abused horses. The Brooke Hospital group have been working really hard in Upper Egypt constructing shades where the horses can rest and visiting veterinary services. 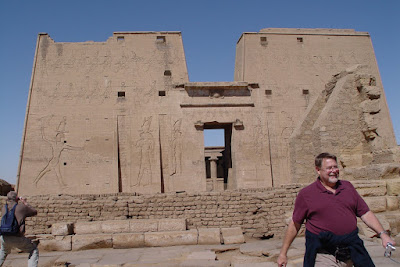 The temple at Edfu is amazing. It is wonderfully preserved temple that was constructed for the most part during Greco-Roman times and was buried in sand until the 1800's. I remember being incredibly impressed with its halls and decoration years ago. Many of the halls are stained with soot near the ceilings from people taking shelter in them many centuries ago. 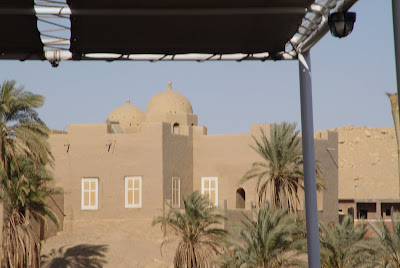 After Edfu, we set sail once again, heading for the locks at Esna. At times we could see desert on one side or another, and there were some beautiful buildings along the river. One sand coloured house in the traditional Nubian style particularly caught my eye. The way that it blended into the surrounding desert hills was lovely. 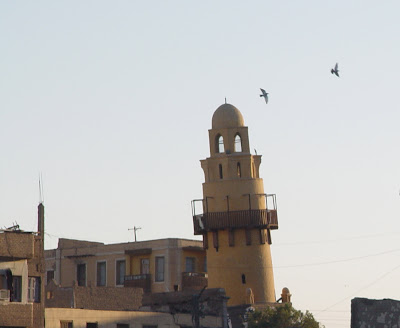 Finally, as the sun was setting, we came to Esna where we moored with a number of other boats while waiting our turn to pass through the locks. South of Esna the river is significantly higher than it is below Esna. Nile cruisers traveling south from Luxor wait in pairs to enter the lock, have about 4 metres of water pumped in to raise them to the southern level, and then after the southbound boats leave the lock, the northbound boats, like ours, enter to have the lock pumped out to lower us to the northern level. From Esna we traveled north to Luxor to find ourselves moored at the corniche in Luxor the next morning.
copyright 2008 Maryanne Stroud Gabbani
Posted by Maryanne Stroud Gabbani at 7:11 PM 5 comments: