No One Needs This

I'm in New York visiting my daughter and a friend told me about the bombs. Immediately we were online at Google News (http://news.google.com) to follow the developments, and messages started flashing by mobile phones, happily all confirming that the people that I know and love are all right. I'm still waiting for some news from Sharm, but I'm hoping for the best. We've owned a house in an Italian time share compound down there for the past ten years, and over that time have accumulated a lot of friends who live in Sharm full time, working in hotels, publishing magazines, running dive boats. There have been plenty of tragedies over the years, especially among the divers who have a very dangerous occupation. One of the boys who went to high school with my son died diving. His father runs a diving business and Karim spent a lot of his time underwater....that does up the odds. We've lost friends to accidents on the highway going down and to other accidents. But there is definitely something about suicide bombers that is shattering to the soul.

The first thing that most people ask is whether I feel any less safe in Egypt after something like this. I guess you could ask the same question of a lot of the poplulation of London, however. Suicide bombers are pretty random and they aren't something that you can avoid by following certain rules. They either get you or they don't. Most of the world could feel very upset about suicide bombers when they were mainly found on Israeli buses. They were the product of a twisted society or just terribly upset by the hopelessness of the situation in Israel/Palestine. Somewhere along the line, they've been exported rather widely now.

Egyptians, as a society, are not the sort of people to go around blowing other people up randomly. It has happened at odd times, most particularly during the 50's as Egypt was demanding its independence from the British. Things have had to be pretty bad before buildings blew up. The old Shepherd's Hotel was burned in the anti-British riiots. But burning a building and blowing oneself and many others up with a car bomb seem to me to be a different sort of act. In the early 80's there was a riot near the Pyramids of Giza when the police went on a rampage because someone had told them that they were going to have to serve an extra year of service. A couple of hotels were burned at that time and a few months agoI was having dinner with a friend of mine who had been staying in one of the hotels at the time. He had gone out for dinner and had to sleep in the garden of another hotel when he couldn't make it back to his own because of the chaos. All of his belongings were fine, however, and his hotel untouched. A colleague in another hotel, on the other hand, was woken by someone pounding on his door in the middle of the night. When he went to the door, he was told by the soldier standing there that he should quickly pack his suitcases and move them out because they were going to burn down the hotel. Shocked, he did as he was told and the soldier helped him to move his luggage out of harm's way. I guess the old days are gone forever.

I checked in with Tracy in Abu Sir right away to see how she and her American guest were doing. Happily both are calm and feeling safe out in the countryside. A time like this is when you appreciate the fact that so far no one has seemed for feel it necessary to explode cows and donkeys.

I hope that everyone out there is fine and that no one has to deal with this horror anytime soon.
Posted by Maryanne Stroud Gabbani at 4:34 PM 2 comments: 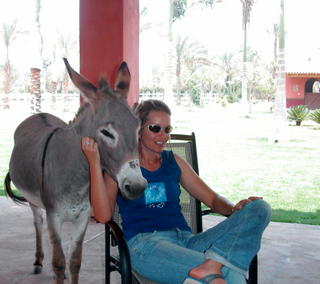 I'm not the only one in the neighbourhood who has a rather wide variety of creatures hanging about. My neighbour Babsi has a stable to die for (I'd happily move into one of her box stalls), a number of horses, an interesting pack of dogs including a rescued Anatolian shepherd who patrols her land at night striking terror into the hearts of anyone who might be stupid enough to walk in the gate, and Mabrouk the donkey. Mabrouk was rescued by her husband and brought home one day. He decided that he was either a dog or a human and made himself at home. Now he sidles up to Babsi whenever she sits down and leans on her shoulder. I think that this is his way of trying to sit on her lap. I took this shot of them one afternoon when it was too hot to do much more than just breathe, so we were all sitting around in the shade drinking ice water. However, I don't think that I'm going to be enjoying scenes like this during the next couple of weeks.

On Wednesday afternoon I'm taking off to New York City for two weeks to visit my daughter. She opted to stay in New York this summer and work for the university, so if I want to see her I have to go there. I really don't like travelling at all any more. Between the fact that anything but economy class is outrageously expensive and the general aura of paranoia in the major airports, travel is quite uncomfortable and not at all relaxing. I figure that I live where people come to spend a memorable vacation, so why should I go somewhere else for mine? It isn't as though this is a place I feel the need to escape from. So I'm off to Europe and then New York where I'm going to 'enjoy' the same heat as Egypt with a much higher humidity. Oh, the things mothers will go through for their children! (Listening, kids?) 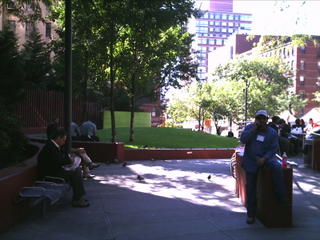 There are good parts to the trip, however, and not just the chance to be with my daughter for a while. For an urban center, Manhattan is very comfortable. As a Cairene, I find it quite calm actually. But at the same time, there are always fascinating things going on all around you everywhere you go. There are also certain favourite cuisines that simply must be patronised on my visit, like the Taqueria on Amsterdam near 103rd. It's a tiny hole-in-the-wall diner with only four or five tables, but the Mexican food there is wonderful. I will enjoy going for walks if there is enough air to have some sort of breeze to cool us off. And the used book stands on Broadway near Columbia University will get a really good going over. There are also about five young university student friends on the east coast as well that I hope to gather for a visit. 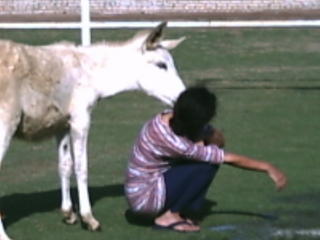 But two weeks is enough time for evenings spent with the daughter and plenty of museum visits during the day. After two weeks, I start feeling itchy and I need to come home. Tracy will be here keeping the dogs and parrots company while I'm gone. Hopefully she'll find some time to go riding as well. So I can relax and enjoy my visit knowing that the creatures are well-cared for. But in two weeks, how much will Morgana grow? She's growing at an utterly horrific rate right now. And my own donkey, George W, is just getting to be old enough to learn to help pull the cart. He's had a babyhood as another lap donkey, but it's time to grow up and help his girlfriend Margarita out hauling the berseem and hay. I feel that I have such a good life here, it's hard to be away from it.

While I'm gone we are going to start the work on finishing the small house for the grooms and the tack. By the time we finish that the crops should be harvested on the rest of the land and we will plot out the paddocks. Once the horses are moved to the new place I will be able to see them from the stairway to the roof. Then we will be almost home.
Posted by Maryanne Stroud Gabbani at 10:30 PM 2 comments: