So Now We Know

The news clippings (the title provides a link) this morning were full of the announcements by the Supreme Council for Antiquiities that a new pyramid had been found in the Sakkara Antiquities Area. This pyramid, called a "headless pyramid" by its initial finder the German Egyptologist Lepsius over 150 years ago, had been lost when covered with sand over the years. Lately the SCA has been rediscovering the site and in the process having to find a way of disposing of all the sand, rock and rubble that had covered it. 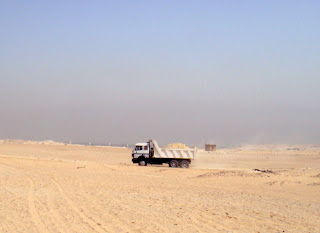 For about a year now, people riding their horses in the desert just east of the Step Pyramid at Sakkara have been treated to increasing mounds of sand, stone, and unfortunately as well, some garbage in the area fondly known as the Boneyard, the Antiquities Council dumping site. While the sand, stone, pottery shards and bone are fairly naturally occurring items, the sheer volume of the dumping has been quite impressive. Happily, the garbage dumping has been rather less in volume and hopefully now that the archaeologists have found what they were looking for, will be even less. 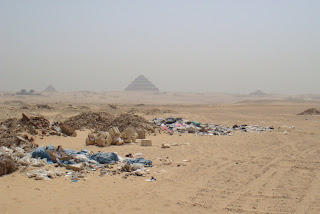 Dr. Hawass is probably quite right in his statements that only a third (I'd guess even less than that) of the antiquities in the Sakkara area have been found. I'm quite sure that the locals of the village of Abu Sir, who have been as intimately involved in amateur archaeological expeditions in the area as their more famous colleagues from Gurna in the Luxor area, would agree with me. I would like to suggest, and in fact I have suggested, to the Antiquities Council that the dumping of debris so close to the area is perhaps not the most brilliant idea in the world. 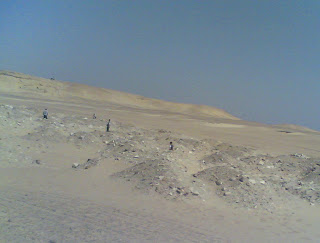 Most fishermen and divers know that the surest way to attract sharks to the area of a boat is to dump trash overboard in the vicinity of boat. The sharks will come for the trash and stay for a meal of the fish that are being caught or the odd diver. Human sharks are no different. By dumping truckloads of sand and rock in which can be found the odd pottery fragment, piece of alabaster pot, bead, bit of pharaonic woodwork or even mummy wrappings, the local scavengers are being lured to an area in which ideally, for the sake of Egyptology, they really shouldn't be scavenging.