A Change In The Tides

I find it interesting that one of the comments on my last post was a commendation on talking about something of more substance than my rather ordinary life. The fact that I write more about the day to day problems and pleasures of living here has nothing to do with the existence of problems in Egypt nor with my awareness of them. I've lived in the US, Canada, and Egypt with extended visits to Mexico, and every place I've lived has had problems. If there are humans, there are problems. We create them, expand them, expose them, and try sometimes to extinguish them, usually with little success. When I lived in the US, I was often uncomfortable with the paeans of praise for the "system" that ensured the "free" press, the benefits of living in the country that was the "leader of the free world". I could see some major glitches with the system even as a child and I found it very difficult to believe that everyone everywhere else in the world was miserable mostly because they did not live in the US. In fact, as I've grown up and had children of my own, I've seen that pretty much everyone's life is made up of a vast majority of tedium, drudgery, and worry. What we have to slog away at, what we worry about, varies from place to place, depending on our financial circumstances, but really it is all the same. Since I do believe that the good that we see and do in our lives lightens the load that we all bear, the "fluff" of non-problematic issues is actually more important than it might seem.

That in mind, I received an email today from an old friend of mine, a retired naval officer that I met as a rider in Alexandria, who is now living in Cairo. Hafez is a product of the old times in Egypt prior to the revolution, but he served in the Navy for years. The link he sent me today was to an Aramco website about the making of a movie that will hopefully become available for viewing in the near future. This was a documentary made in 1964 about the last time that the Nile flooded, the swan song before the Aswan High Dam stopped the yearly flood. I've spent time talking to friends of mine here about the Nile flood. Spending a lot of time in the countryside and villages on horseback offers a lot of time to consider some of the less pressing items in life. As I have thought about the building of pyramids with visitors here, the issue of the Nile flood has shown itself to be a vital one. The old photo of the pyramids across flooded fields shows an area that is now wall-to-wall apartment blocks in Giza. Imagine the havoc with those flooded.

Very few places in the world have had the kind of life that the Nile Valley has in the past. Summers here are hot, very hot. The season for growing grains and vegetables is actually best in the winter rather than the summer. Lettuce wilts, carrots get woody, crops such as peas and beans are crisper and fresher in the winter. Until the advent of the High Dam, there was a period from the end of June to October (essentially the summer) when the entire valley was underwater. Nowadays with the floodwaters contained by the High Dam and distributed throughout the year in irrigation, it's hard to imagine the disruption that the inundation caused. As you can read in the linked article, the final inundation was a generous one and the infrastructure of the cities of Egypt were affected by the rising waters. 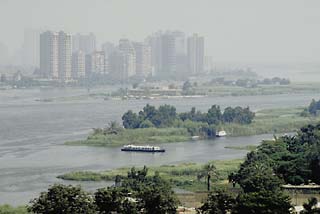 When one considers the idea that an entire population of a country was essentially on holiday for four months a year, the idea of pyramid building becomes rather less preposterous. After all, people had to do something. Of course, as Egypt became more urban and industrialised, the four month holiday was more of a four month headache. One of my friends was telling me how the island of Zamalek, now a center for embassies, schools, galleries, and general sort of Egyptian yuppie culture, used to be divided into two islands during the flood period. My mind can't even begin to comprehend the chaos that would ensue if this were to happen now. Telephone lines, electrical power lines, water pipes, all of the things that we take for granted as part of our comfortable modern life, would have been at risk during the four month flood. Sometimes, it's good to realise that the good old days may have been old, but weren't necessarily good.
Posted by Maryanne Stroud Gabbani at 1:16 PM 10 comments: