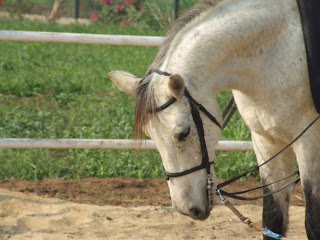 One of the hardest parts about caring for animals is the day that inevitably comes when you must say goodbye to an old friend. Almost a year ago the last Czech ambassador to Egypt and his wife gave me their lovely grey gelding Blue Boy to care for. Blue Boy was one of those Arab crosses that look like they have maybe some draft in them, and they are often used for jumping and dressage. Jana and Jakub rode him in these disciplines, but mostly in dressage once they realised that he had a problem in his feet that would flare up if he were jumped too much or too high. When the time came for them to move back to the Czech Republic, they offered him to me, wanting to give him a comfortable retirement and being concerned that not every owner would take care of Blue Boy's ouchy feet. 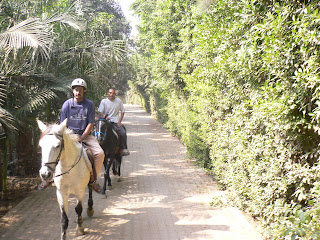 He came to live in the herd at the end of last summer and had some difficulties learning to live with a group of horses. He'd lived all of his life in solitary confinement in a box and really seemed to have little or no idea of how to communicate with other horses. We have small paddocks attached to the main one so that he could visit with the other horses without having to worry about squabbles and Blue Boy moved in with us. He was a terrific horse for beginners being very easy going and eager to please. He would follow a group of horses around the countryside trails, never spooking at anything. His only fault was that once in a while he would offer to take a route not recommended but he was always willing to reconsider if the rider said that it wasn't a good idea. His smooth gaits made him a favourite with our novice riders. 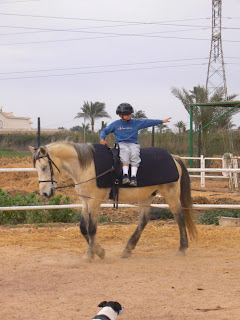 When a German trainer offered to teach me about vaulting, Blue Boy was an obvious pick as our vaulting horse. He had such smooth steady gaits and a nice broad back, both of which are very helpful to a rider who is learning to do gymnastic exercises on horseback. A number of children tried him out, at first daunted by the idea of standing up or sitting sideways or backwards on a moving horse. They would start out unsure and finish a quarter of an hour later quite full of themselves, having completed a number of gymnastic exercises on Blue Boy's broad back. Blue Boy was a huge confidence builder. 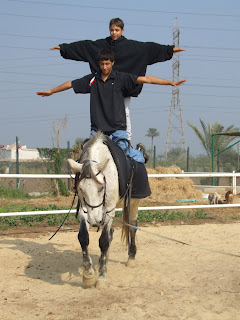 A week ago we woke to find him in severe discomfort. We called the vet, followed his instructions while waiting for him to arrive, and worried a lot about Blue Boy. Horses have amazingly long digestive tracts and a tummy ache in a horse is definitely not be be ignored. We gave him liquids IV, pain killers and oil to try to help him pass whatever it was that was causing the problem, but to no avail. We lost him in only a few hours. The vet was on his way out when Blue Boy died, but as it happens there was nothing he could have done. We don't have easy access to clinics where colic surgery can be done, and it turned out that he had a hard blockage in his upper intestine that was causing the problem. It was very hard to lose him but it was one of those things that we had no control over. 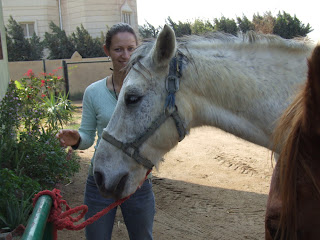 Burying something as big as a horse is seriously problematic in an area where the water table is only about a metre and a half under the surface of the soil. If we were to bury him in the farmland, and bury him as deep as is appropriate, the last two metres of the hole would be underwater and the water in the area would be over-fertilised, killing plants all around. One of our neighbours had a bulldozer at his property, so he drove it over to pick up the horse and to take him out to some old gravel mines where he could be buried.

So we found ourselves BlueBoyless last week and it took some getting used to. The next day all of the animals on the farm were very quiet...much less playful and silly as though they somehow understood that a member of the group was gone. Indeed they should have understood as he was within sight of all the animals during the process. I found myself having to correct myself when organising horses for trips, and we all miss the big grey gentleman who became so dear to us all. The hardest part was emailing Jana and Jakub to tell them...and emailing all of Blue Boy's many admirers and friends. We will miss him a lot.