Despite all the government's poorly thought out destruction of the recycling program of the zebaleen, the infamous "swine flu" has arrived, like most tourists, by jet. Various cases have been reported in Cairo, including (unsubstantiated as far as I can tell) rumours of one at the drive-thru McDonalds in Maadi, prompting closures and quarantines. AUC's dorm in Zamalek was one of the early victims. Kim, at Whazzup Egypt!!! has an excellent post of recommendations by the WHO on the handling of influenza, whether H1N1 or any other type. Highly recommended reading.

Email ThisBlogThis!Share to TwitterShare to FacebookShare to Pinterest
Labels: health

Knocking On The Door 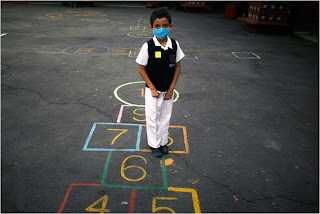 It was reported that there have actually been a few cases of the dreaded "swine" flu, much more politically correctly called H1N1, in Cairo. A young woman from Florida and a young man from New Jersey, both living in the AUC hostel in Zamalek, were diagnosed with it and the hostel was quarantined. I'll bet that the other students really loved THAT! So all the pig slaughter comes to naught, but heaven help the politician that suggests that the government proceed to slaughtering 747's and their like...or even that they not be allowed to land. There goes the total economy should that happen.

The New York Times (click on this post's title) had a article assessing the likelihood that this flu would become seriously dangerous rather than a mild discomfort (if one is basically healthy) that spreads fairly easily. They still didn't come up with a really good justification for the pigs.