No Man Is An Island

Funny things happen to islands in the Nile near Cairo. A couple of years ago residents of Maadi noticed dredging equipment working on a small unoccupied island just off the Military Hospital on the Maadi corniche. Rocks were piled against the banks of the little island, palm trees brought and planted...all very intriguing. Oddly enough, no one could find out who was doing the work or why or to what end. Now as you drive by there is a very manicured island with a picture of the President of Egypt on it. Did he change the island? No one knows. But there was quite a loud fuss made over the process because changing the shape or size of an island changes the way that the river flows and the River Nile is not just an Egyptian river but it is a major world river. When the Aswan dam was constructed and the silt that used to travel down the Nile to the Mediterranean Sea became blocked behind the dam, the farmers of Egypt weren't the only people affected by the change. The sardine industry was devastated because the sardines relied on the nutrients that had been reaching the sea through the Delta...except now their food source had vanished. Changing a river in any way affects much more than the people who are living on its banks. 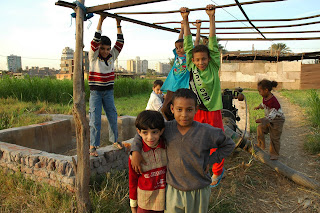 Not long ago news reports mentioned that another island was having problems of a similar sort, but this was a larger island and one with quite a few people who have been living there for a number of generations. The islanders found some dredges parked alongside their island and some military personnel standing about on the shore. Having both military personnel and dredges is a very awkward situation. The military have fairly remarkable powers in Egypt... one doesn't want them as an enemy. 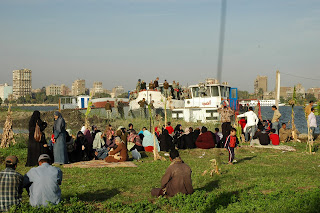 The situation became quite tense in fairly short order. The inhabitants of the island are, for the most part, farmers and as such very dependent on their land. At the rate that farmland is being developed in Egypt, to have to pull up stakes and move to another plot of land would not be an easy thing at all. Starting over on reclamation land is a massive enterprise in terms of installing infrastructure and building a new life...plus, Egyptians in general really don't like moving. They like living near their families and friends from generations back. 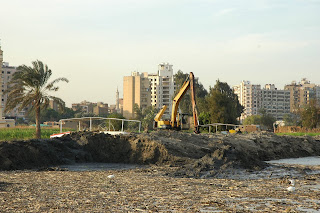 I've been watching the news to see what is happening with this island and for the past week or so there's been no news. The islanders are fighting the incursion of the army in the courts, but in a country where the military have extraordinary powers, that's not an encouraging activity. There's been no indication of who it is who wants the island or who claims to own it and no indication of the intended outcome. Hopefully, at some level of planning in this issue, people will realise that this isn't just a corner lot somewhere that might make a good grocery store. Islands are part of a river and the Nile isn't just any river.