This Time They Have Something Right

Al Azhar in Old Cairo is one of the oldest universities in the world, originally a school attached to Al Azhar mosque during the European dark ages. Now, it accepts students of both sexes from all over the world and they study business, medicine, literature and engineering along with Islam. Al Azhar is the religious authority in Egypt to a large extent and is listened to all over the world. They have a service for people who write in with a question of how aspects of modern life interact with religion, and I must say that some of their decisions on various topics are not things that I can agree with. Lately someone wrote in to ask whether the use of bleaching creams by women to whiten their skin was counter the beliefs of Islam and the fatwa (decision) was that it was counter to Islam. By extension, the mufti is probably against make-up in any form...good luck on that one.

Even the pharaonic paintings in the oldest tombs have the same protocol. Men are painted brown and women are white or at least many shades lighter than the men. One could say that this shows an early understanding of the dangers of too much sun, or that it is indicative of the idea that a successful, wealthy man can show off his wealth by allowing his women to stay in the house relaxing and not working in the sun. The logic of it is one of those "whatever" issues as far as I can see, but there is a prevailing attitude in Egypt that women with whiter skin are more attractive than those with darker skin. You don't find people being denied employment or living space because they are "black" or "different" so much here. It definitely is not the same attitudes that exist in the US regarding black and white. It's much more a deeply ingrained aesthetic and it is bloody stupid.

I watch television in the evening while waiting to see if my children log onto the net so that we can chat, mostly things like CSI or if I can find a nice British crime drama or something. I'm sure this says something deep about me but let's not go there. I have a satellite connection to systems that are primarily broadcast from Saudi Arabia, the UAE and so on. The kinds of programs they broadcast and the contrast with the public morality of these countries is yet another story...I mean what do the sheikhs make of Sex and The City anyway? The thing that really drives me nuts is the fact that many of the commercials are for bleaching creams and that these commercials are made here in Egypt. A young woman is shown trying out for a position as a television announcer and failing because her skin isn't light and luminescent enough...she uses the cream and gets the job and notice from a nice young man. Give me a break.

I went to a large grocery store and was looking at moisturisers but many of them had bleaching creams added and I'm just not into that. So, I say in this case...Go Mufti. You got it right this time.
Posted by Maryanne Stroud Gabbani at 10:02 AM 7 comments:

First Day of The Feast 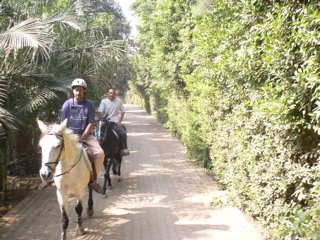 Everyone figured that yesterday would be the first day of the feast, Eid el Fitr, that marks the end of Ramadan, but traditionally the feast is determined by a human viewing of the phase of the moon, and the particular human this year determined that the first day of the feast would be on Tuesday rather than Monday. An energetic burst of the work ethic on Sunday ensured that the work to be done on Monday would be minimal, so there everyone sat wondering what to do with themselves since they were fasting yet another day. They all looked so lost that I suggested it was a good day for a group ride to learn some of my trails and we saddled up five of the horses to go out for an hour. My grooms can ride, naturally, and as it turns out my gardener is also quite capable. Mohamed Said, my driver/accountant/right hand man, on the other hand, might have been on a horse a couple of times in his entire life, so we put him on Blue Boy a lovely big cushiony Anglo-Arab who used to belong to the Czech ambassador to Egypt, and popped him into the lineup. The guys had a great time pretending to be tourists and asking the names of crops, then cracking up at each other's silly answers. The grooms and gardener, Farag, Madah, and Hussein, encircled Mohamed protectively, but Blue Boy proved himself once more to be a most reliable babysitter. Having killed a couple of hours playing, the entire crew finished up work in the confidence that this morning they would be having their customary tea and cigarette in the morning. 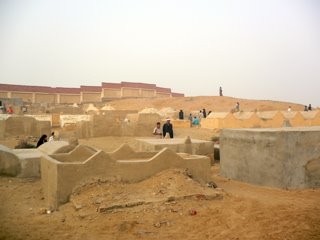 I was wakened this morning at about 5 am by chanting. "Allahu Akbar. Allahu Akbar. La illaha il Allah." God is Great. God is Great. There is no god but God. The first time I ever heard the chanting on the first day of the feast we were living in Alexandria and there was a large and popular mosque about three blocks from our house. The first prayer in the morning on the first day of Eid el Fitr is traditionally held out of doors under the sky and I heard men and boys chanting this as they walked to the area near the mosque where the streets had been blocked off for the prayer. Out here in the villages, I heard first the muezzin for the closest mosque chanting, then a young voice in addition, and gradually the volume grew as men and boys gathered at the mosques chanting all the while. There is no way to sleep through the sound, and to be honest, I'm not sure that I would want to. Having identified the sound as praise rather than a local political uprising, it still brings chills but they are no longer of apprehension.

I had arranged with one of my grooms, Farag, to ride to the Shubramant/Zawia graveyards at 6:30 this morning as he wanted to pay his respects to his grandfather's grave and I wanted to see what was going on. One of the grooms sleeps over every night to help me if anything happens with one of the horses (injury or colic or such nightmares that happily seem to pass us by for the most part..knocking on wood) so Farag had the horses ready for us and we rode through our local village to the desert in the mist that almost obscured the rising sun. Despite the early hour, women and children were up and preparing for a day of festivity, sweeping areas before houses, laying out trays of oranges, guavas, grapes, bread and setting up small shops selling inexpensive toys for children. Most of the children were wearing new clothes as Eid el Fitr is the traditional day for the buying of new clothing. 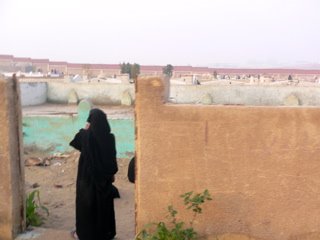 The tombs for Shubramant and Zawia are a few kilometres away through the desert so we let the horses have a good gallop on the way. It was so early that even the desert dogs were just lifting sleepy heads to watch us zip past...much to early to chase horses. As we approached the grave area, we spotted groups of young boys playing on the hills just within the desert, and the groups grew more numerous as we came into the tombs. These tombs are built just between a narrow strip of cultivated land and the walls of the Beni Yusuf army base, a crowded band of low rectangles, many of which bear low domes on top. Strictly speaking, under Islam when someone dies they are to be washed, wrapped in a long cotton cloth and buried in an unmarked grave in the desert. There is no way in heaven that any religion or force in the universe could get Egyptians to forego their tombs and the rituals associated with them. So much of the activity here on this morning is particularly Egyptian in nature rather than Islamic. 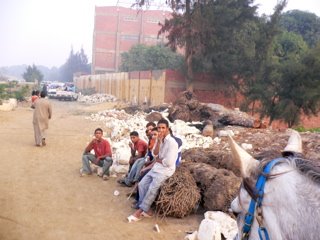 After the prayer families go to the family tomb where they sit and have a light breakfast of oranges, guavas, grapes and sweet bread. The children go off to find vendors of such village delights as plastic sunglasses, cheap plastic cap pistols, and the ubiquitous bomba's or cherry bombs, strange paper wads with some horrible exploding powder that makes a noise guaranteed to delight any young creature. Parents pray, visit with family and friends, and generally take it easy. We arrived at the tombs just after the end of the prayer and made our way on horseback through an area that is usually quite empty if there is no burial in progress. Today crowds of children floated across the path and had to be warned to avoid walking behind horses, while various adults were greeted by us both. At one point we passed a group of young men sitting smoking with obvious pleasure in the sunlight that was burning off the mist. 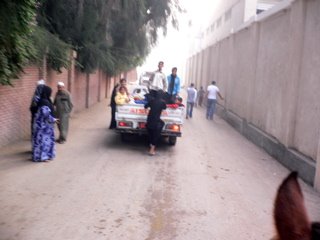 It was only about 7:15 as we left the tombs, but minibuses of families were arriving from the villages to pay their respects to ancestors as we were leaving. Farag noted that if we'd stayed another hour the horses wouldn't be able to move through the crowd. As it was the activity and the trucks and cars trying to make their way into the area were making life quite interesting for me in terms of photography and despite the lovely anti-jiggle feature of my little camera, many of the photos came out quite blurry.As we left the tombs to return to the farm through the back roads, we were still encountering families on their way to the tombs or children bedecked in holiday finery and happily waving toys. One little boy had some brilliant flourescent green plastic sunglasses obscuring half of his face as he waved a cap pistol at us, and a couple of girls carrying large balloons almost gave the horses a heart attack as they shook them causing the rice grains inside to rattle loudly. The geldings skittered around a corner, leaving us quite relieved that we were not planning any more outings today. The thought of a million kids on a combination of the sugar high from the Eid el Fitr cookies, a lack of sleep from getting up at 6 am, and armed with plastic weapons and rattling balloons just didn't bear consideration. 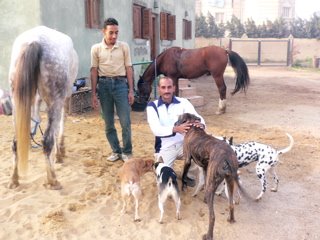