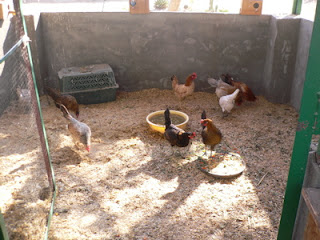 First of all, I want to wish everyone a belated Merry Christmas...or maybe it's an early one. We celebrate Christmas twice in Egypt, first on December 24/25 (Christmas Eve is often more celebrated by the Europeans) and second on January 7 with the Copts and Eastern/Greek Orthodox. Egyptians love a party and really have no problem with any excuse for one. This year the Eid el Adha, the Greater Feast that celebrates the willingness of Abraham to sacrifice his son in obedience to God's orders, will be starting on New Year's Eve so we have that as well. Crowded holiday season we are enjoying.
How did I spend my Christmas? First of all, my children are in the US this year so we aren't together. That is a bit sad, but life is like that. Airfares are expensive and school holidays are not so long. On Christmas Eve, I went to my friend Kati's home in Maadi for a Christmas Eve dinner as I've done for the past three or four years. Kati is a Finn raised in the Middle East who was married to a Lebanese businessman and has raised her three daughters in Egypt. The oldest who is the same age as my daughter is currently studying in the UK, her middle daughter couldn't make it home from San Diego where she is studying, and the youngest is still in school here. Kati's ex-husband and our friend Mona and her son Ali joined us all for dinner. Ali, is an irrepressible seven year old, who gave people a good excuse to buy toys to put under the tree and then had all of us playing with him. I'd been so busy out at the farm that I hadn't been into the city for almost a week and I gave a selection of farm produce: fresh lettuces, homemade pesto, and chicken and turkey eggs. A lovely evening. Then Boxing Day (December 26 for non Brits or Canucks) I found myself with an invitation to a Norwegian Christmas brunch with my neighbours. Norwegians eat an amazing selection of smoked and cured meats and fish for Christmas; moose salami, reindeer paté, various types of salmon, trout and herring. Eating out is such fun. 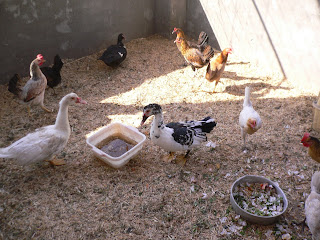 The poultry at the farm are becoming more and more entertaining. Every morning when I go to feed the parrots, ducks, turkeys, and chickens they all rush around to try out breakfast at every one else's house. The poultry eat the leftover birdbread and fruit/vegetable mix as well as their own corn and greens daily. The food in every flight cage is identical, so it must be the ambience that causes the moving around. The chickens live with the Cuban Amazons and sleep on a wooden curtain rod that serves as a long perch in the center of the cage, while the Amazons seem to prefer to perch in a corner 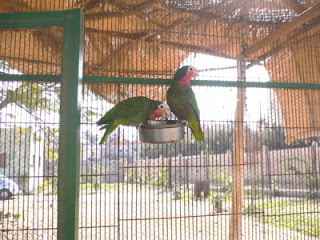 near the top of the cage. It's quite funny to go out to the cages and see a long line of baladi hens on the long swing. I have about eight chickens, seven hens and one rooster. While a friend was visiting a while back we began naming them after explorers and got as far as Erik the Red for the rooster, Henry (for the Navigator for a beige hen who is always wandering out of her flight, Vasco, Pizarro, and a number of others. But they are pretty hard to keep track of. They give me about 5 small eggs daily.

The turkeys live with Ali the African Grey and Bamba the Bahamian Amazon. They also seem to prefer to sleep at altitude, having taken over a corner perch for the nights. Otherwise they patrol the ground looking for fallout from above. African Greys are interesting diners in that they will look through the bowl for the most delectable bits and toss anything in the way onto the ground. It didn't take the turkeys long to figure out that standing around under the parrot dishes was a very good idea. My housekeeper bought me the turkeys who are lovely bronze birds with low chortling vocalisations. They were supposed to be a male and a female and were originally called Uncle Tom and Aunt Jemimah, but as it happens they are both females and Uncle Tom is now called Oprah. They give big speckled eggs that are collected for eating since they aren't fertile. 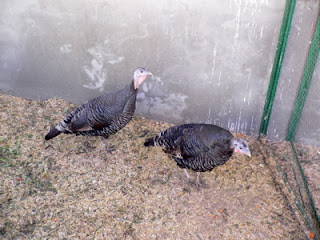 We are planning to have a male join us soon, but for now the eggs are delicious and I love the sounds of the turkeys. There are no plans to eat them. Instead , I'd prefer the eggs and to raise the young turkeys. Turkeys are surprisingly good flyers and I have to be careful to herd them gently back to their flight cage after breakfast so that they don't go airborne and frighten the other birds.

When I was considering ducks for the farm, I went online to learn something about ducks. According to the sources that I found, most domestic ducks are descended from two duck lines, either the mallards from Europe and North America or the Muscovy ducks from South America. Most of the ducks in the farming area are Muscovy or a mix of Muscovy and Mallard. I have one male, called Donald naturally, and then there are the girls, Daphne and Daisy. 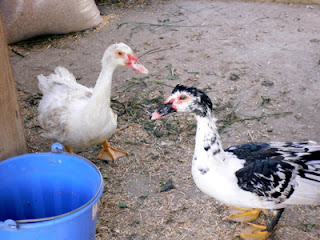 They have a plastic tub to play around in and they live in the flight cage with Fritzi the African Grey and his flock of budgies and the lovebirds. Donald is black and white with a small crest of feathers that rise up if he gets excited. There are two eggs in the nest box right now so hopefully we will have some ducklings soon. Again, these three will not be for dinner but for parenting. I get a kick out of the ducks because they are the least shy of all the birds and will eat out of my hand. Although the picture of the ducks shows a bare concrete floor, they all have chopped straw spread over the floors to give them some warmth in the winter winds and something to scratch around in. 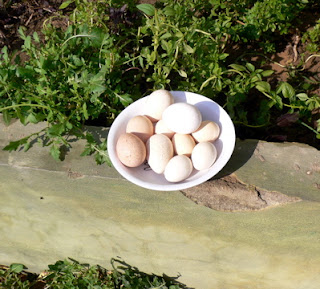 The eggs that you get from properly fed poultry are absolutely wonderful. The shells are hard enough that you have to work to crack them and the yolks are a deep red orange. The larger eggs in the bowl are the turkey eggs, the large white egg at about one o'clock in the bowl is a commercial chicken egg and all the tiny eggs are my baladi chickens' work. My arugula and basil are adding the green touches.
Posted by Maryanne Stroud Gabbani at 12:09 PM No comments: