To Market To Market 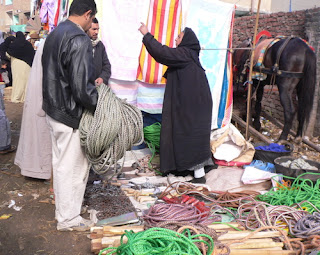 A while back we built a woodburning oven behind my barbecue for baking bread. We brought in a skilled bricklayer, bought a special heavy ceramic plate to serve as the base in the baking section, and finally in that classic countryside style, plastered it over with mud. But an oven without any equipment isn't going to produce any bread, so today we did what any normal person would do under the circumstances. We went to the Menawet souq. Menawet is a village not far from the farm, somewhere near Badrishin. I don't believe that it has anything at all to recommend it other than the market that takes place there on Sunday, but from my point of view the Sunday market is pretty much worth the trip. 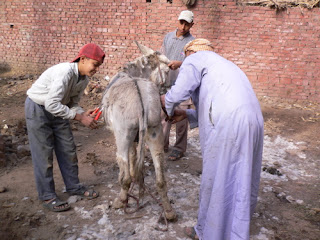 What we were going for was a selection of paddles made from palm wood that would be used to move the bread in and out of the oven. As well we bought a large shallow box into which the bread would be placed after baking. But, as so often happens on shopping trips, we found a number of other things to interest us. The first thing for me was a donkey barber shop that happened to be right where we were trying to park. Parking in the immediate area of the market is quite out of the question, as my trusty Mohamed Said kept reminding Farag and me. He and Farag had come once before to the market to get a harness for George, our donkey, and in order to fit him properly they had come with the donkey cart. In order to have the donkey, the cart and the harnesses all in the same place, they had driven right into the market area, a feat they had no wish to copy today. So while Mohamed was working the jeep into a tiny slot between a palm tree and a building, I watched the donkey barber shaving donkeys with his hand clippers. This guy must have a grip of steel, as he works these manual clippers all day long. Because all of my animals live out of doors, I don't clip my horses or donkeys in the winter. I figure that the longer hair has a very good use and just leave it, so the barber has never visited us. 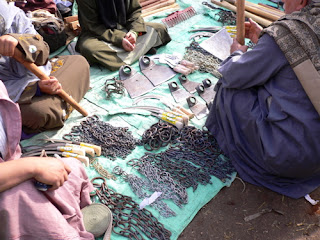 Once we got into the market area, we immediately found something that we needed but had not thought of. A woman was selling various types of ropes and cords, so we bought about 40 metres of a medium weight pseudo yacht braid to make rope halters and horse leads with. The rope was soft enough to be comfortable in the hand, had a nice colour combination of black, brown and beige, but the fiber looks for all the world as though this cord is made of recycled plastic bags. All the better actually. Right next to the rope seller was a mat with handmade iron tools displayed on it for people looking for axe blades, chains, and the like. Business was pretty brisk and while Farag and Mohamed took care of the bargaining, I took pictures. 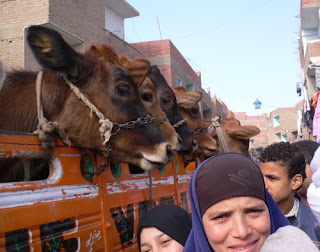 I had to watch myself as the street which would usually accommodate at least two trucks abreast was now so crowded with pedestrians that only one car at a time could manage to squeeze through. And what cars. I found myself nose to nose with truckloads of calves, donkeys, and poultry. At one point, a carter drove by with a young stallion of about four years or so tied to the back of his cart. No one was watching or monitoring the young horse who simply stood quietly when the traffic came to a standstill. Arab stallions have such a reputation for hijinks that I found myself chuckling at the sight of this steady young horse.

Down the road and across the street a group of men with donkeys stood around a doorway where a farrier was pulling shoes, trimming feet and shoeing donkeys on the side of the road. I have a pretty good blacksmith who comes to the farm to trim and shoe my horses and donkeys. 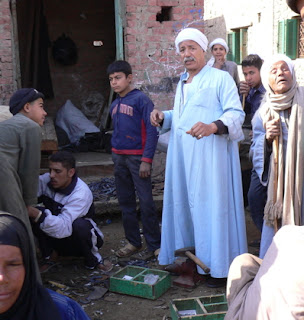 We arranged with visiting farriers to have Omar trained to increase his skill level. After watching the farrier working on this poor donkeys, I was very happy to have Omar available to us. The tools were quite medieval and the skill level was best not discussed. A number of the donkeys gingerly made their ways down the road after having the hoof improperly trimmed. When I first took some photos, one of the men objected and asked me for money. I shrugged and told him that if he really didn't want me to take a picture I would delete it, but that I didn't have any money to give him. I explained that I own a farm with horses and have friends abroad who work as farriers who would be interested in his work and tools. Assured that I wasn't a tourist, he was all smiles at this point. It's ok to be a nosy neighbour. But it's hard to concentrate on one spot when people are walking past you with baskets of ducks on their heads. 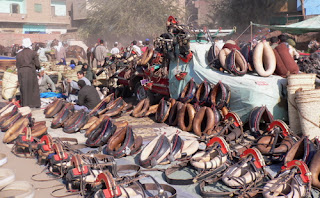 Right across the street there is a wall and an entrance to a large piece of (probably usually) empty land which is currently wall to wall livestock, foodstuffs, and equipment. To the right are clusters of goats and sheep being offered for sale. Farag's family raise sheep, goats, and cattle so his attention is drawn to this area every ten seconds. Further back and to the left, cart horses are being sold and tried out. Some of these horses are beautiful and as the men buying and trying to sell them put them through their paces, a dust cloud is stirred up that just lingers over that quarter of the yard. I spot a dark bay mule and go over to take a look. A friend of mine has asked me to find him a riding mule, but unfortunately most of the mules in this area are actually hinnies. A mule's mother is a horse and father a donkey, while a hinny is the opposite and hinnies are smaller than mules. A casual question revealed that mom in this case was a donkey, but when I say "That's too bad. I was looking for one whose mother was a horse." I'm almost knocked over by the earnest assurances that that was the case. Well, thanks for the compliment, but just how young do you think I am anyway? With boundless enthusiasm, the handlers tell me that the hinny is very calm and trained to riding. Do I want to see? Well, whether I do or not, they are going to show me and they toss one of their number on to the back of the young male (I'm looking for a female mule) hinny. There follows one of the best bucking exhibitions through flocks of goats that I've ever seen in my life and we make our way back to the car hauling our boxes, paddles, and rope chuckling.
Posted by Maryanne Stroud Gabbani at 8:38 PM 3 comments: