A Visit With Adam Henein 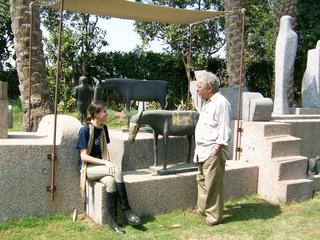 A week ago on Saturday my favourite riding partners opted to go on an exploration with me to see if we could find our way from the paddocks to the Wissa Wassef Museum. According to Google Earth, the route was very straigthforward, simply an extension of a route that we had explored before. So we ventured forth on the horses to find our way to the weaving center. That day was still hot, too hot to be riding in the desert, but in the farmland we had trees for shade and our trail took us into the wind blowing from the north. My village neighbours were working hard on the harvesting of zucchini squash from the fields near the paddocks, in preparation for Ramadan which would start a few days later. For some odd reason, the month of fasting is a major food-buying time, as Egyptians do a huge amount of socialising during Ramadan. Invitations fly to friends and familes to join for the breaking of the fast each night, resulting in something almost like a month long celebration of Christmas. 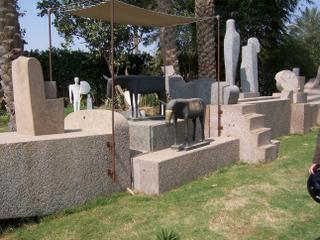 After a longish trek along canals, marking our progress by the restaurants and villas that we recognised on the other bank of the canal running parallel to the main road, we found ourselves outside the museum. We rode the horses in, to the astonishment of the doorman, explaining that we were visiting a friend who lives in the compound behind the museum. After a pleasant chat with Pat, we set out again seeking the best way home. Turning towards the expressway to the north, we passed a door that stood open. On inquiry it turned out to be the workshop of Adam Henein, a well-known sculptor who had cast a delightful bronze donkey that stands in the garden near the front gate of the Wissa Wassef center. Unfortunately the sculptor himself was not at home that day, being out of the country. 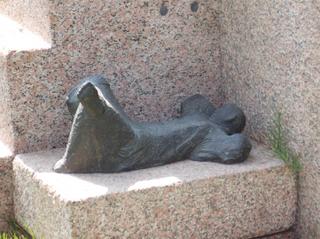 This weekend the weather was even better than last weekend and we decided to take the same trip to take some photos of the trail, since we'd both forgotten our cameras the week before. We set out as before, but the activity level in the fields was much lower now that the fast had begun. Much of the more difficult labour had been done shortly after sunrise so that the farmer and his family could rest during the heat of the day. With temperatures still above 30 C, this rest is necessary for people who are neither eating nor drinking during the daylight hours. We found our way to the atelier of Adam Henein and discovered to our delight that not only was he in, but he was quite intrigued by the fact that we had arrived on horseback and he invited us in to see his work and chat. 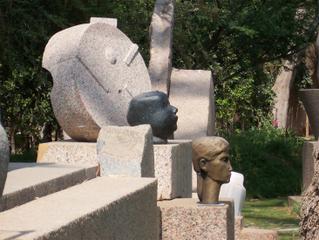 Adam Henein is a very lively older gentleman with wonderful lively eyes and a chuckle just hiding behind most of his sentences. We introduced ourselves and were ushered into his magical back garden which is dominated by a granite boat of pharaonic majesty, upon which various bronze and stone statues are placed. Due to a relatively recent theft, many of the smaller pieces are not left out in the garden anymore, but were brought out from the storage inside to be placed where we could view and admire them. And admire them we did! His work has shown in many of the major galleries in Europe and in New York, so this is not a forgotten artist at all. When we did some research on his career, dreams of owning one of his bronze donkeys took wing, since it would be highly unlikely that either of us could afford the piece. But the loss is less for me, since the artist is more or less a neighbour and I can always go and drool over the donkey in the Wissa Wassef garden. 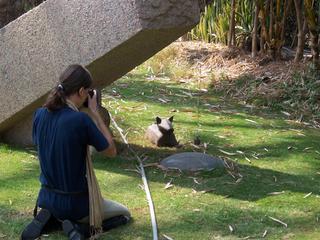 Mornings like last Saturday remind me how blessed I am. I may never be able to afford an Adam Henein piece for my garden, however much I might love to have one of his donkeys, goats, or dogs adding its particular bronze charm to the more lively creatures that inhabit it, but I have had the pleasure of meeting one of Egypt's treasures. This was a morning that I will remember for a long, long time.
Posted by Maryanne Stroud Gabbani at 9:39 AM 2 comments: