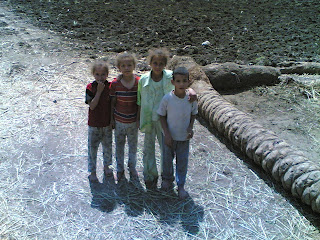 I heard from Mohamed today that my neighbour's son Ahmed had been asking why I hadn't been by to visit him. And why was I supposed to visit him? Well, it turned out that the families here circumcise their sons at about the age of four and it was Ahmed's turn to have this done. I was a bit shocked because I simply assumed that male infants would undergo this surgery right after birth, the way that it had been done in Canada. Please pardon the frankness, but I can see a good reason to wait since it is easier to snip off small pieces of skin when they are of a visible size, but then again the trauma to a newborn who may or may not even wake up during the process (and I know a few who slept right through it) is probably much less. However it works out, I was amiss and I snagged a small box of dark chocolate digestive biscuits as a little bribe to my small friend. 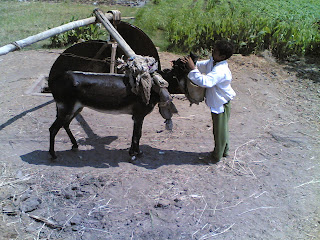 Ahmed seemed quite fine for someone who had just gone through a life-changing surgery and was buzzing around the house offering everyone cookies in no time. His older brother Mahmoud, who is in about third grade, was sitting with one of his aunts working on his math homework. When he finished that, he started his English and his aunt asked if I could help him. Sure, why not? When I saw what he was assigned, I was horrified. He was given a small paperback workbook to deal with that could not have been more irrelevant to his life if it had been written in Martian. Mahmoud and I sat together as we sounded out such vital questions as who in his family or neighbourhood played golf. 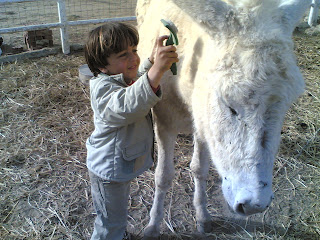 Golf? I don't think that a child in this area has ever seen a golf club. Mahmoud's aunt explained to him, "You remember that game you saw on television with the men on the grass with the sticks and the little ball?" Mahmoud's smile said volumes. Golf is not exactly a reality here. One series of questions asked about Mahmoud's interest in sport. Does he like to run? Did he play sports today? Did he go swimming today? Is he planning to record a sporting event on television today?...What was he supposed to understand from this? His family doesn't have a video machine, nor does anyone in the neighbourhood. Mahmoud has never seen anyone tape a show in his life. And swimming....just where is a boy from the countryside supposed to swim? I didn't know whether to laugh or cry. 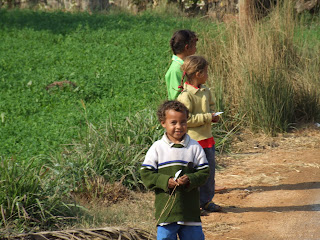 I chatted with Mahmoud's mother and aunt about the work. I had to admit that one of the reasons that we'd never sent our kids to Egyptian schools was the horrific curriculum that is inflicted on the students. I'd been quite aware of the enormous load of homework that these kids have for some time...this on top of the fact that Mahmoud leaves for school at 7 am and gets home at 4 pm...and the fact that the work assigned is often quite inappropriate for the age range of the children. And Mahmoud is going to one of the local private schools as well. They are suppposed to be better than the public. The public schools are much more crowded and the teachers are even less qualified. For now, Mahmoud is going to drop by in the afternoon for some help on his English and I will be explaining golf to him.