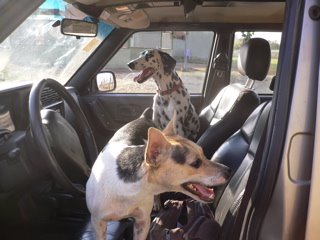 This has been a summer to remember...if only to remind myself that they aren't all that bad. One of the dubious blessings of the internet is the little doodad in the right hand corner of my browser that gives me the weather report daily. I check it because horses are sometimes less tolerant of heat than humans, and this summer it has given little comfort when the average temperatures here have been over 95 F or about 37 C since about June. I don't have air conditioning but I do have a well-designed house that allows maximum air flow, thank heaven for small mercies. With a garden that is still under construction, the dogs learned to find shade where they could, including the inside of the jeep whenever the door was opened. 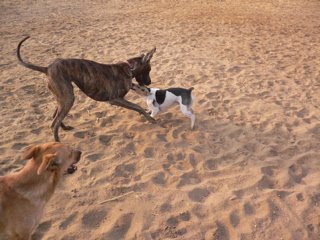 Once the sun went down, the young ones would go out into the paddock to wrestle and play while the rest of us just looked on in bemusement.

One of the things that we did to relieve the heat was a mass purchase of watermelons from the Obbour market, Cairo's main food terminal. This is a huge market on the Cairo-Ismailia road to which farmers bring their produce, both meat and vegetables and fruit. 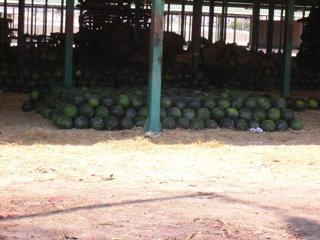 The difference in price is astounding. Watermelons that would sell for LE 12 in our local fruitseller were LE 6 each. We bought ten of them and then I had to find a place to store them at home. Very interesting experience to shower with few watermelons every morning; no wonder I had them make the shower big. This was the first time I'd been to the Obbour market and I was utterly taken with the enormous savings to be had by doing a lot of the neighbourhood's shopping as a cooperative...but then on the other hand, the neighbourhood grows a lot of the things found in the market, so why descend on the chain? 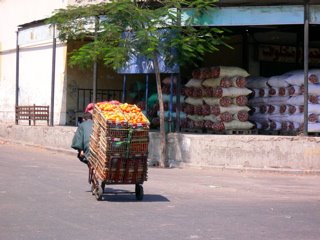 Not only that, but people have been madly planting vegetables such as tomatoes, cabbages, lettuce, and onions all over the farm. Pretty soon we won't have to buy much at all.

Part of summer that isn't so great is the fact that due to the school year, summer is the time when ex-pats depart. I lost two sets of friends this way over the summer, but each family left me something to remember them by, even if only temporarily. My friend Nathalie and her daughter Pauline ran into EU bureaucracy when they made plans to move their cat Kettou back to Brussels. Cats and dogs now have to be microchipped, vaccinated, and blood-tested with the blood being checked in Europe before they can travel. Poor Kettou had to board with me for a couple of months when her results didn't get back in time to fly with the family, and she was moved into the back garden with our cat Schmendrick only to find a week later that she wasn't the only boarder. 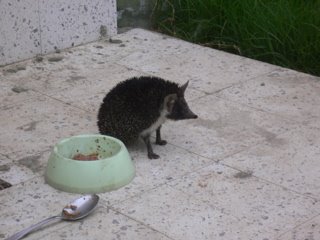 My friends Uma and Jim from Singapore were winding up a four year stay in Cairo and needed a new home for their Ethiopian hedgehog, Bob. Bob is about the size of a grapefruit when he rolls himself up, and he could care less about cats. He's been living with humans for four years now (that's pretty old for a hedgehog I've heard) so whenever he hears me come to the back garden to do the laundry, he comes poking his little nose out to say hi. I was especially glad of his friendliness when our old magician Schmendrick died last week of heart failure. The heat had probably taken its toll although the cats have the best wind and a very cool laundry room to hang out in. But he wasn't a young cat anymore and the vet said that his heart simply gave out as we were driving him into town. We buried him under a red Yasmine Hindi (frangipani) tree in the front garden. That's an old family tradition and I had to warn our tenants about digging under trees in the backyard in Maadi. But I guess that we figured that the pets we were missing somehow became part of the trees.
Posted by Maryanne Stroud Gabbani at 10:34 PM 9 comments: