I've taken to waking up about 6:30 am each morning. A series of puppies who joined the pack and needed to go out and felt that they needed to play at an ungodly hour instigated the change but it has become habit now. I can't say that I like the call of Koko, the Amazon parrot, who begins his commentary on the day as the sun is rising. He sounds like a bad door hinge for much of his vocalisations. Sometimes I wonder if we could just teach him to whistle or do something socially more pleasing. On the other hand, I imagine that it all would mean something to another Amazon if we had one around.

The real attraction to the hour, however, is the quiet at the farm. Almost everyone is still asleep at home now, there is no one asking for my attention, other than the latest young dog, and I have the time to have a train of thought rather than the odd boxcar or caboose. I can write, plan the next batch of seed harvests, consider an exercise regime for our aging horse herd, and try not to think about an image of a world hurtling to disaster that assaults my mind every time I connect to the sources of the news that I use. We are all everywhere under this assault if we have the time and energy to connect to the world outside of our small domains, but sometimes I almost envy the villagers around me who don't have newspapers, who don't watch television news (and if they do, it is generally governmentally sponsored and designed not to rock any boats), and whose primary concerns are at the level of village politics, crops, and children. They are largely unwitting passengers on this terror-inducing ride that we all are sharing. They are, however, aware of how events in the country around them are affecting their small pockets of concern, such as the rising costs of electricity and fuels, the strange ways that the prices of foods increase while the amount of money they get for their crops does not increase, and the difficulties in getting medications for children and animals. Not being satisfied with the small picture of my neighbourhood, I know that I will connect to try to understand what the pattern of movement in the world in general is. This is what I began doing in 2011 when I could see that what was happening in Egypt was also happening in Tunisia, Syria, and Bahrain, generally with equally unsatisfying outcomes although each has been different.

Sometimes, however, I try to have a day in my domain, leaving the world beyond the farm to careen as it will, whether I am aware of it or not. Yesterday we had no visitors booked at the farm, and there was time to catch up on some left over chores. We had harvested most of our karkade before the weekend and I had spent some time peeling the thick petals of the seed pods off to dry for tea, while saving the pods to dry to supply us with the next year's crop. This is peaceful work, albeit colourful, since the dark wine red petals stain my hands a burgundy hue as I work. I asked one of the guys to collect the rest of the pods from plants that had been growing along the driveway so that I could finish the job and hope that the purple thumbs would go away soon. I had forgotten that one of my young women friends was coming by to interrupt my morning collection of depressing news items for my timeline, so her arrival was very welcome. I also got a phone call from a Toronto number, which was a young woman visiting Cairo who called to see if she could come out to go horseback riding. I have no idea at all how she'd heard of us, but I suggested that she come, and I ended up with a couple of women to chat with during the day.

We sat outside at the big wooden table speaking of photography projects, Egyptology, what to visit in Cairo and why, canine pack behaviour, lost loves, friendship, the search for guidance and clues in navigating our lives...the usual sorts of things I suppose. Not at all usual, I suppose in one way. I have never been very good at inconsequential chatter, so the kind of topics that allow our hopes and fears to bounce off a shell don't often come up. It was our visitor's birthday and she had decided that downtown Cairo being rather intimidating, she wanted to spend it in a more natural, calming situation and found herself at the farm. Cairo is intimidating. It is fast, crowded, nonlinear, deep, profound, with layer upon layer of history both modern and incredibly ancient...layers that push up from under sidewalks for the casual visitor to stub one's toe on. As Cairenes (ex-Cairene in my case) we advised deciding on places to explore that would create ripples in questions in herself and encourage her journey. As it happens, she told us that she had worked in IT for years and was finding herself attracted for some reason the writings of Jungian psychologists.

Our visitor went out for a ride with my staff for a couple of hours, my friend and I continued our conversation about the twists and turns of life during a three month period when she had been traveling, and I found myself with an image in my head that was becoming clearer and stronger. I have often spoken with friends about a web of old women who, like spiders, feel the tugs and jerks of events and concerns in our planet, but who are not there to prey on victims but there to keep the web steady so that the younger folk can repair connections, and strengthen the threads. I can list many of these women and my heart blesses them daily that they simply have the strength and health to exist, while I notice younger women who are working their ways from the center to the edges where eventually they will take the places of those of us who will go on. I don't know why the image is of women; it simply is. I'm not going to question that although when I have talked about my image with a few other women, they do understand. I know men who are supportive of the web, and perhaps they have a web of their own that I am not a party to. I'm comfortable with that.

Part of the clarification of the image came just last week when a former yoga teacher of mine, Debra, appeared suddenly in Cairo accompanying her husband on a trip here. We hadn't seen each other for about fifteen years as she and her family had moved to South America in a work transfer for her husband. We haven't really been in touch, but she has been in my thoughts almost constantly, since she was the instigator, the catalyst, for enormous change in my life and in the lives of a number of my friends who were also her students. We studied yoga with her, but we also learned how to hold and protect our souls while changing our lives to be more expressive of who we all were. We didn't have much time together during her visit, but, to use an utterly mundane image, I felt like a battery that had been popped into a socket to recharge. She told me that she had been dreaming about me and felt a real need to see me in the flesh and see what I was doing. As it happened she and her husband showed up at the farm just in time for lunch and I waved my hand over the dishes proclaiming that "this is what I am doing much of the time", preparing and serving food to sustain and strengthen the body and soul hopefully. We both had a good laugh because my claim was both true and too simple and we both knew it.

Perhaps my image of crones holding the lifelines of the world is just a way of reassuring myself in frightening times. I'm not sure. I doubt that I will ever be sure in my lifetime. Our visitor from Toronto mentioned that one Jungian analyst from Canada who recently died had been saying that a pendulum has been swinging in the universe from a masculine to a feminine axis and that much of the misogyny, violence against women, and the attempts to roll back rights for women are stemming from the reactions to this change in orientation. Perhaps this is true. I don't know. But at the depths of my soul I can feel the need for balance among all the aspects of the world, human and nonhuman, and we will continue to try to protect this balance in my pocket of the world. 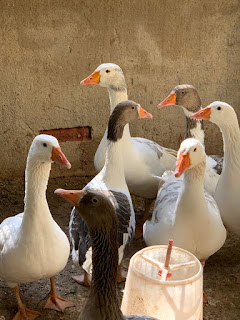