Christian Science Monitor is not a newspaper that most people who know me would assume that I'd read right off the bat. It is, however, a very good one with articles that are not simply rehashes of various wire service stories. The one that will come up if you click on the title here is one of the good ones about the mixed blessing of Arab tourism.

Long before we moved to Egypt I would accompany my husband on business trips with the children until they got old enough for real school...as opposed to nursery school. One of my strongest, and least favourite memories of these trips was the frequency with which I would be sharing an empty restaurant at the Marriott in Zamalek at some ungodly early hour when small children wanted breakfast RIGHT NOW with Saudi and Gulf Arab men who would stagger in blind drunk for coffee at 7 am. I'm not particularly opposed to people on holiday going out on a bender. What would drive me nuts was the hypocrisy of the the whole scene. These are people who take a lot of pride in being the bastion of "real Islam" and keepers of the faith. That's the sort of behaviour that truly gives Islam a bad name, and it is unfortunately not particularly seen as a problem by the tourists from the peninsula and gulf.

There are villages out here in Giza that are well known for the fact that basically every summer young girls are sold into a temporary marriage for a sum of money that is then used to arrange another marriage later after the wealthy client has departed, often leaving the girl in a family way. It's essentially long term prostitution and it has become a way of life, but it wouldn't be one if people who have a LOT of money didn't feel that gave them the right to offer to buy. One of my neighbours told me that once it was accepted in a village, it became a way for the girls to be able to afford nicer houses when they married whoever it was that they were actually planning to marry. Funny how money can change morals, isn't it? 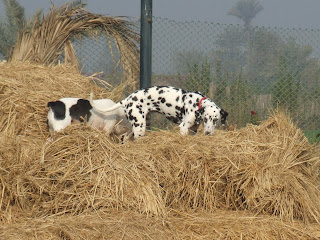 Zipping through the news, I found a video on Reuters of the rat invasions in China. If you click on the title here, you can get to the site. The video is amazing.

Aside from the sheer horror of rivers of rats, it's worth thinking about the fact that China has basically made having dogs illegal. Now my pack of Rat Terriers would be in terrier heaven. Maybe they need an airlift from some of the terrier clubs. We have three species of rat in Egypt so we could have lots of rat problems except for the work of the baladi dogs and cats. Bless them.