Sham el Nessim? In Dahab It Was Smoke

I had planned a post on one of my favourite holidays in Egypt, Sham el Nessim. Sham el Nessim (it means 'smell the breeze') is an ancient festival from pharaonic times when all the families in Egypt head for the closest spot of green to spend the day in celebration of nature and spring eating fish, onions and eggs. I spent the morning in the desert with my neighbour Morad who was riding a wonderful mare I bought last year. Stella has spent a year with us hopefully regaining her sanity after time at the racetrack and pyramids stables....Yesterday she showed me just how much progress she'd made and I was walking on air all day.

Until evening. A group of us were sitting around the remnants of our own Sham el Nessim feast when a phone message told us to turn on the news. Damn. Another tragedy in Sinai. Following the news on the BBC this morning we listened to the usual speculations regarding Al Qaeda, but the feeling for many of us is that this is part of a serious disaffection between the Egyptian government and the Bedouin who for centuries were the only inhabitants of Sinai. 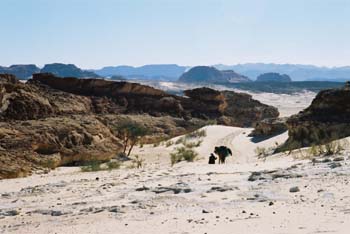 The peninsula was one of the most beautiful and desolate places in the world, bare rocky crags that support the barest of desert life looked down on bare sandy beaches where the clear blue sea bloomed with multicoloured fish and corals in a glorious counterpoint to the reds, browns and blacks of the desert rocks. Until recently, this was Sinai. Most of the roads had been built during the Israeli occupation and there was little interest from the Egyptian government in the area at all. 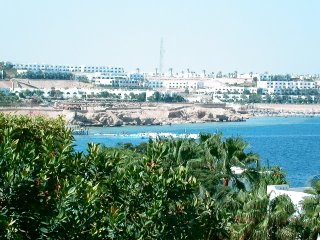 Entrepreneurs realised the potential for touristic development of the Sinai and began building hotels, camps, time-share apartments and so on on the coastal areas. Unfortunately much of the development was undertaken without any of the necessary environmental impact studies, but that is another story. What is important for the issue here is that the lands where the coastal Bedouin families had been fishing are no longer available to them because the peninsula is almost wall to wall development on the coast. Families that sold land to developers often can't afford to live in the new towns that are growing around the tourist areas. Land that was sold for peanuts to Egyptian developers years ago has earned millions of dollars, euros, yen, what have you, for the businessmen, but the Bedouin have simply been pushed into the barren interior of the land where the most promising work is in the growing of marijuana and opium poppies. Naturally these enterprises are not looked upon with favour by the government and the farms are the targets of drug raids on a regular basis. 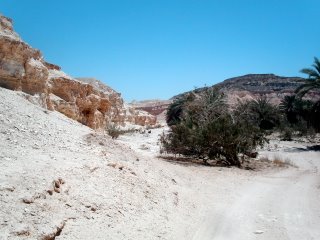 But has anyone considered sharing the benefits of development with the local families? Very few. With all of the money flowing through Sinai, very little has stayed there to benefit the Bedouin who barely manage to exist in their beautiful hell. No schools, no training, no hospitals. What are the children here expected to do in the future in this situation? How are children who have no material assets, no chance to learn the skills needed in the increasingly urban society that we have here, going to manage as adults who have no possibility of employment?

Why do we need to look abroad for the perpetrators? As the government has said, this is a local problem but it is a very serious one that needs attention.
Posted by Maryanne Stroud Gabbani at 9:36 AM 15 comments: