Shopping Among the Neighbours 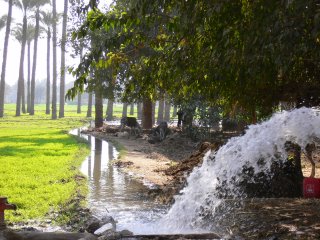 We needed some supplies for the new land, supplies that you can only get in a farming village, so Tracy and I headed over to Hawamdaya with my head groom to buy them. Hawamdaya is not on any tourist map, in fact it's barely on any maps. We get there by going through the village of Abu Sir and continuing on down a narrow asphalt road towards the Nile. The asphalt wears out soon enough and becomes potholed mud more suited to the donkey carts and three wheeled motorcycle tuk-tuks that have been imported from India to serve as taxis in the area. I was very glad to be driving a jeep, aside from the fact that the items we were buying (huge aluminum cooking pots and a three burner camp stove) wouldn't have fit in the trunk of a regular car. The area before entering the village is beautiful, farming land as yet untouched by the spectre of urbanisation. 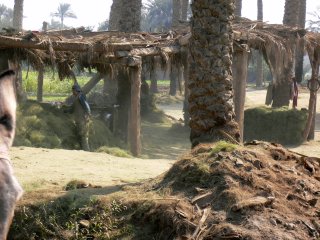 Last Saturday I explored it a bit on horseback with friends and found it to be just as entrancing as it promised from the road. Lovely palm groves alternated with open fields and on the road we found a palm fiber factory working turning the palm leaf into thin green threads that are used to stuff furniture. Ten years ago it was common to see these factories working under the palm trees, but now they are less and less common. Most people seem to prefer foam rubber now, but I recall driving through Abu Numros on the way to the Club when my horses lived there and plowing through mounds of green fiber piled on the roads to separate from the wheels of cars or carts as they passed over the palm branches. 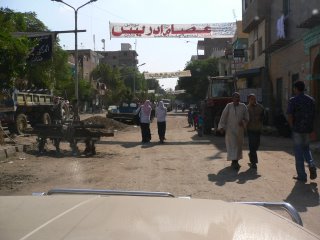 The longer I live in Egypt, the more fond of the villages I become. A lot of my friends think that I'm nuts. The villages are dirty, indeed. There is no attempt at civic services there other than the odd school, phone office and electricity board. The people may in fact be uneducated and have some rather odd ideas, but they usually have the time to chat and exchange these funny thoughts with you. I wouldn't want to live in a village like Hawamdaya for anything, however, and am much happier on my own farm, but a visit there is fascinating. I can't imagine what the village streets are like if it rains since they are composed of that sticky mud that turns to the consistency of concrete during the dry season. These are places that are truly best suited to equestrian travel. Maybe that is the charm for me. 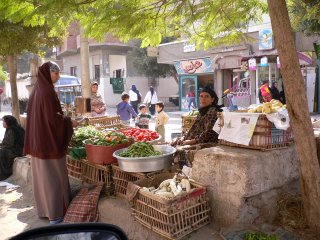 The road into Hawamdaya is oddly enough a divided road with a grassy median on each side of which the dirt potholes are avoided by two independently traveling lanes of traffic. Driving down the right hand side of the median you are just as likely to encounter oncoming traffic as down the left hand side, so it really doesn't matter which side you choose. The trees in the median, however, provide shade for the women selling the fresh produce to the villagers. It's a wonderful example of the randomness of Egyptian country life, as long as you are feeling relaxed and comfortable with the unpredictability. If you expect traffic, cows or even people to be following the rules, you are in the wrong place. 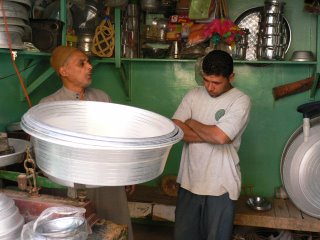 The main items that we needed were some heavy aluminum pans about a metre in diameter to serve as feed bins for horses until we could finish the paddocks. These are sold by the kilo rather than by the piece, so as we selected items, they were weighed and the price of each item or group was added to the mounting total on my mobile phone. Wonderful things, mobile phones, they are like little computers anymore. The shop we picked was owned by an old man who hauled out an assortment of pots and pans to suit our needs and then bargained ferociously over the price. Not too many discounts from that one. 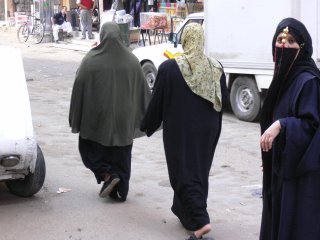 While I chose the pots and pans, Tracy took my camera and had a great time shooting photos of the passersby. Women came to the shop for pots such as those that we were buying, while others seemed to be walking children home from school. Most of them wore the usual head scarves that are so common in the country, while one or two wore the old Bedouin style face coverings. Tracy is the quintessential tall California blonde, the essence of the foreigner, but no one minded her impromptu photography. In fact a number of people offered themselves as subjects. I wish I could post all of the photos, but it just isn't possible. 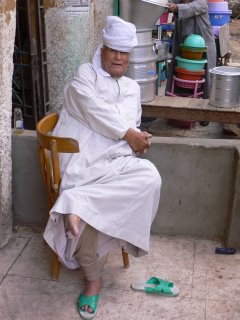 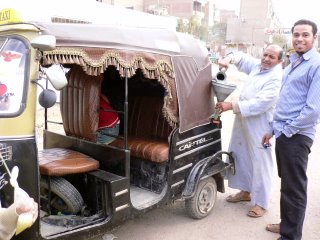 On our way out of town, laden with many kilograms of aluminum pots and a stove for cooking barley for horses and eggs and tea for grooms, we stopped to buy some grains for my parrots and chickens. Right next to the man selling the grains was a small booth filled with plastic jerry cans of gasoline. As we waited for the corn, sorghum, and black-eyed peas to be weighed out, one of the tuk-tuks came to a halt by the booth. The driver ordered some gas for his taxi and we had a chance to ask him about his vehicle. Imported from India, these tricycle taxis only use about 5 litres of gasoline a day. A litre costs LE 1 here, so the outlay for fuel is about LE 5 per day. They carry passengers around the village areas for .5 to 1 LE a trip, so these are profitable little things...Cute too. We left to go home thinking that if we had extra money, one of these would be a nice investment, and probably one that many of our village women would really appreciate. It would sure beat riding in the back of a pickup truck.
Posted by Maryanne Stroud Gabbani at 11:00 PM 6 comments: