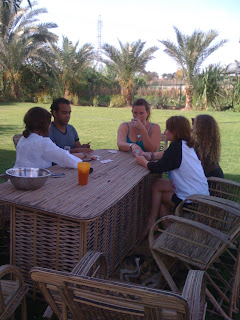 Each June my niece from California brings a small group of secondary students from Besant Hill School in the Ojai Valley for a two week visit to Egypt. They've stayed at my farm in the midst of Egyptian farmers and visited some of the less touristy sites of Cairo...and naturally the pyramids of Giza. Gotta do the Pyramids. These are relatively privileged American kids and Jen's idea is that two weeks in Egypt will open their eyes to the richness and variety of life in a country that they've previously seen in a fairly two dimensional aspect. The hope is that they will return to assess their own lives and country in a new way.

This year we arranged a minibus for them with a very personable young driver who has learned to enjoy hip-hop music as well as local Egyptian music. They were accompanied on many of their day trips by a young male friend of ours who acted as interpreter and who has taken the kids out to an Egyptian movie and bowling as well as to visit the Citadel and Khan el Khalili. They've spent time at an orphanage in Mokattem and walked around Zamalek after visiting the Sudanese refugee center at All Saints Cathedral there with Reem, a young Sudanese woman. Family dinners Reem and Tamer have alternated with local fast food (koshari and such) and card games in my garden with a refugee film festival tonight before catching an early flight home tomorrow morning. It's been delightful having them and listening to their thoughts and questions. This is Jen's fifth trip here (many previous were family visits) and hopefully far from her last as the trip gets better organised every time. You can read their blog entries by clicking the title. It's a lot of fun.