The Power of One

Tomorrow we will be driving downtown to Sednaoui hospital with my housekeeper's son Ali and a friend of mine here who works as a groom and has a son with cerebral palsy so bad that he has fallen over many times and broken his chin. We are going to consult with my friend Dr. Mostafa Shokry, who is one of the best orthopedic surgeons I know (he's reconstructed one of my shoulders and replaced both my knees) and also the administrator of Sednaoui hospital, one of the  dreaded governmental hospitals...but one that he is transforming into a real hospital.  For some odd reason, an orthopedic surgeon has always been one of the first doctors that our family would have to find when we moved somewhere.

Ali was kicked by one of my horses over a year ago, an accident that broke his upper arm in about 5 places. It was in the evening and I had clients about to go out, so I splinted it carefully and sent him off to a local doctor who xrayed it and put it in a cast. The next day we xrayed it again and it was clear that the initial cast was NOT going to suffice so I sent a photo of the xray to Dr. Mostafa. He had us bring Ali to Rabaa Adaweya hospital for the initial surgery to put a titanium plate in his arm to keep all the pieces in place while they healed. We did the surgery to remove the plate at Sednaoui about ten days ago and now we will remove the stitches and that will be that.  Khamis is bringing Omar for an assessment of what they can do to help the repeated injuries to his chin. Caring for a disabled child in the villages is a really tough job but Khamis and his wife have done their best.

Government hospitals in Egypt have a well deserved horrific reputation. They are underfunded, understaffed, have had almost no security since the revolution 2011when the Ministry of the Interior decided essentially to go on strike.  One of my first experiences in Egypt when we moved here in 1988 was with the government hospital in Alexandria whose ICU was the only place we could get the correct medication for my husband who had suffered a heart attack. It was all I could do not to run out of the place screaming because it was like my worst nightmares of Dickens. He was there for two weeks and survived, but it certainly wasn't because of the hospital. So when we were going to Sednaoui I was apprehensive to say the least. What I found was a real surprise. 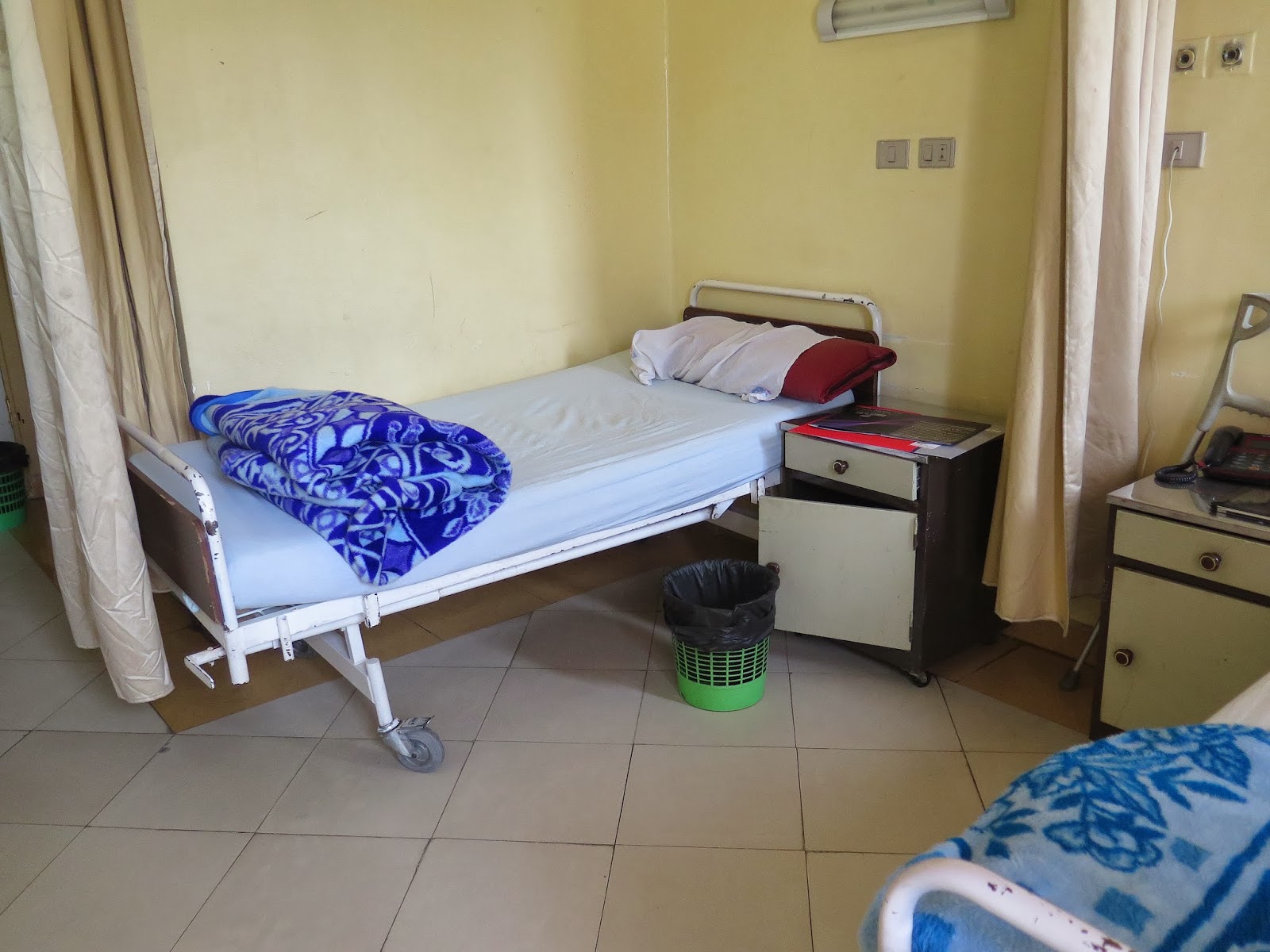 Once we got Ali settled in his room to wait for his day surgery, Dr. Mostafa took me to see what he's been doing at Sednaoui. Since he's very important to the maintenance of my arthritic old body, I hadn't been all that thrilled when they'd named him hospital administrator, and I'd sympathised with his stories of frustration and exhaustion as he first undertook the task, taking courses in hospital administration at the American University in Cairo as well as working all day at the hospital and evenings in his clinic with his private practice. We had chats about how to  encourage more active participation by staff members in the process of improvement as I was working on changing my staff from labourers to real partners at my farm. It has been a very tough year for him. 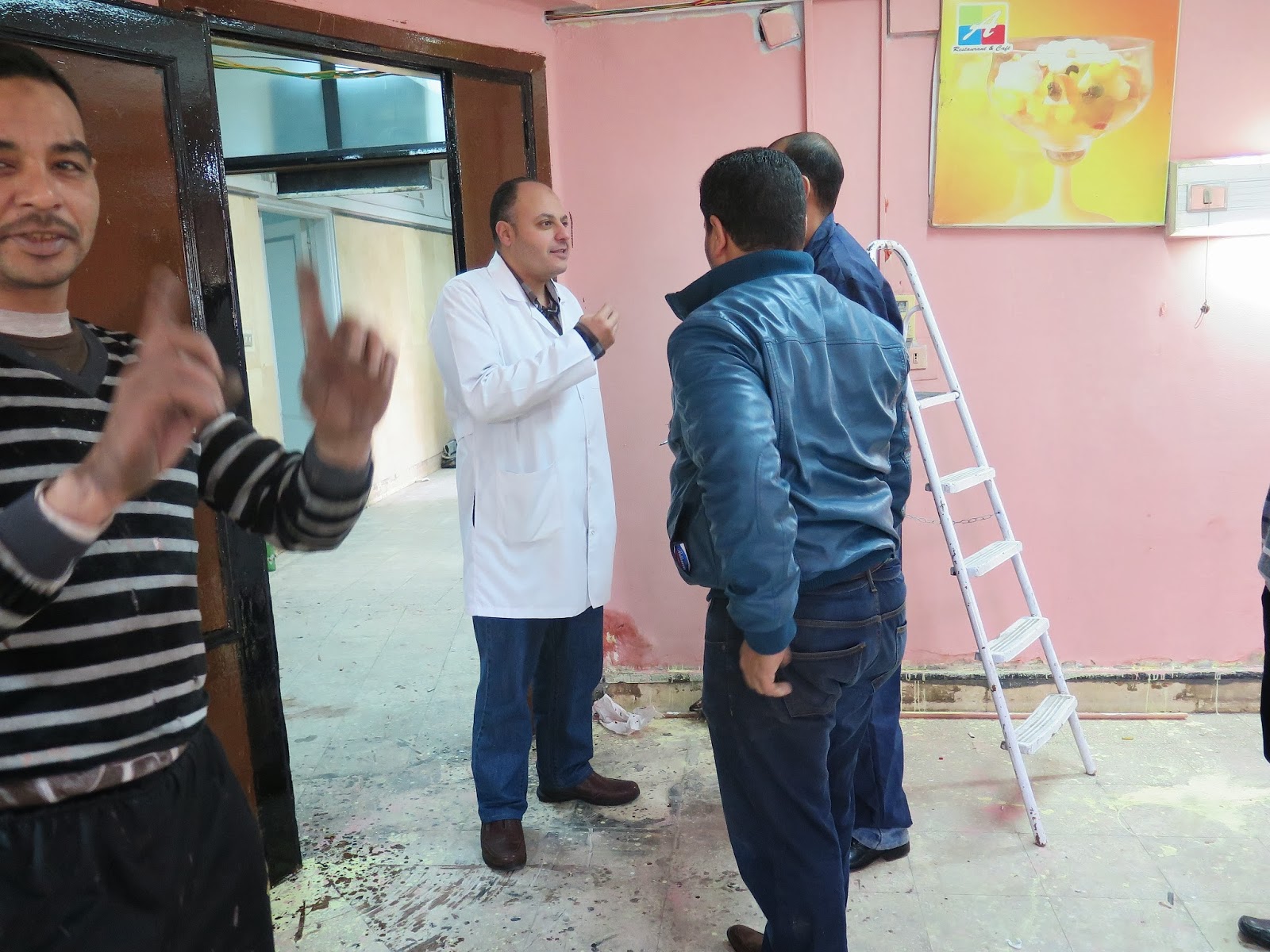 The first place that we noticed a difference was in the room that Ali was assigned. It wasn't large or fancy, but it was very clean and bright. I've had much worse rooms at some private hospitals in Cairo. In fact the first time Dr. Mostafa had to do surgery to reconstruct one of my shoulders after a fall, we were in a private hospital that was so horrible that we all agreed to get me out of there absolutely as quickly as possible. The nursing in my home would certainly be better than at St. Peter's in Heliopolis, and the premises were a thousand times cleaner. As we walked around the hospital I could see that our conversations about staff motivation had paid off at Sednaoui. All of the staff from the doctors to the men doing the renovations were welcome to speak to Dr. Mostafa and clearly respected and liked him.  Well, from my point of view, of course they would since he is a terrific person. 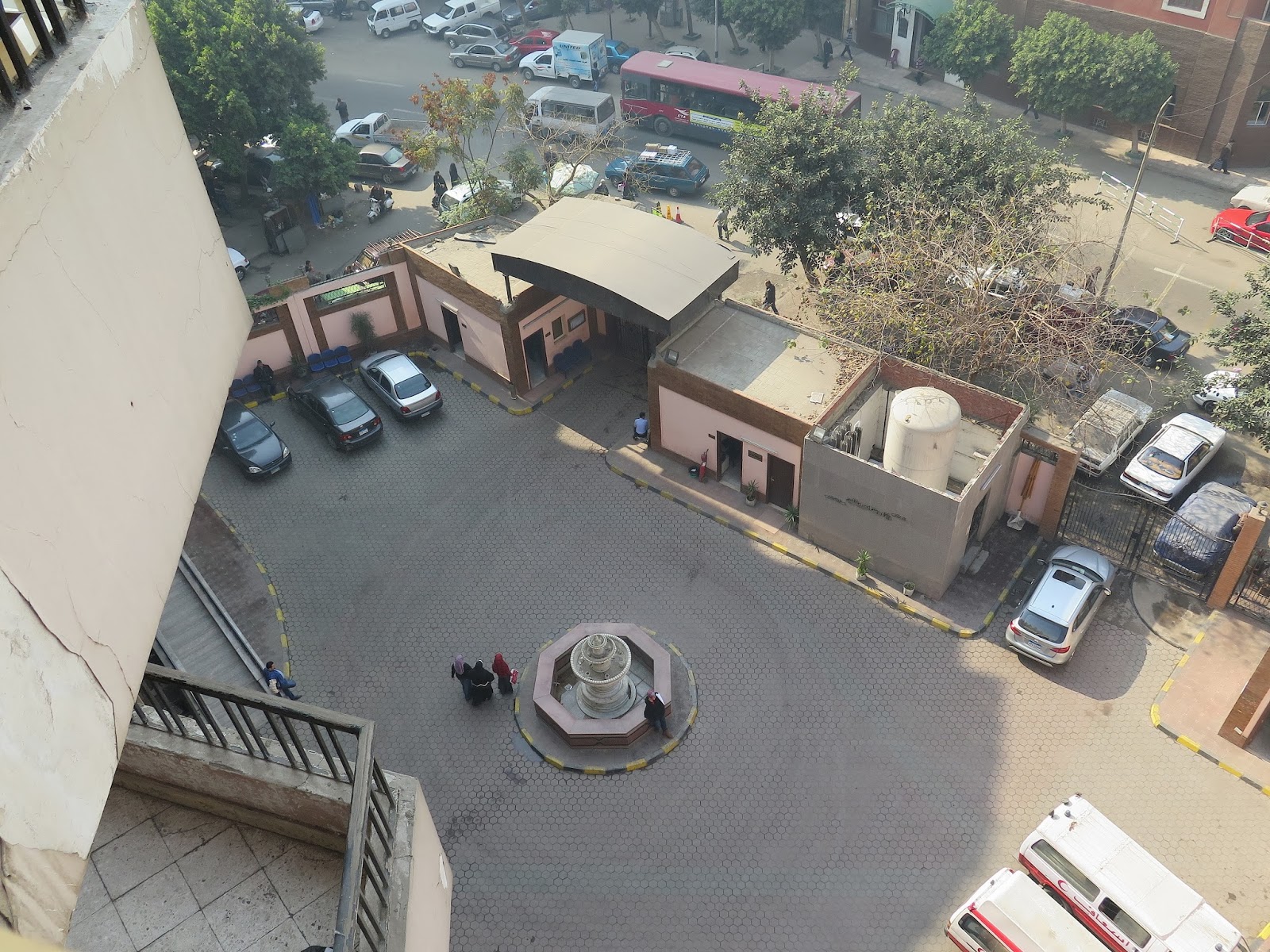 One of the initial things that the hospital had to do when Dr. Mostafa was trying to upgrade it was to improve security. Since 2011 there had been many incidents of people attacking doctors and nurses either in frustration at a lack of service or, sadly, to acquire the drugs available at hospitals. There is a security company working at Sednaoui now that is responsible for maintaining security at the gate. One of the more difficult day to day problems is the fact that if a poor Egyptian (Most of the users of government hospitals fall into this category.) is in hospital, vast numbers of his family and friends will come to see and want to stay with him. Unfortunately dealing with more than one companion in a hospital is not conducive to effective work, so the numbers have to be restricted. As well, since we all know that hospital food is boring at best, most people bring home cooking, which can wreak havoc on a prescriptive diet. A major part of the security staff's job is trying to thin out the visitors. Unfortunately, last summer Sednaoui was the receiving point for many people killed and injured in protests at Fath mosque near Ramses and the courtyard became a triage stage to try to facilitate treatment. Dr. Mostafa's usually cheerful face went a bit grey at the memory. Orthopedic surgeons, pretty much by definition, don't generally have to deal with people who are dying of wounds. 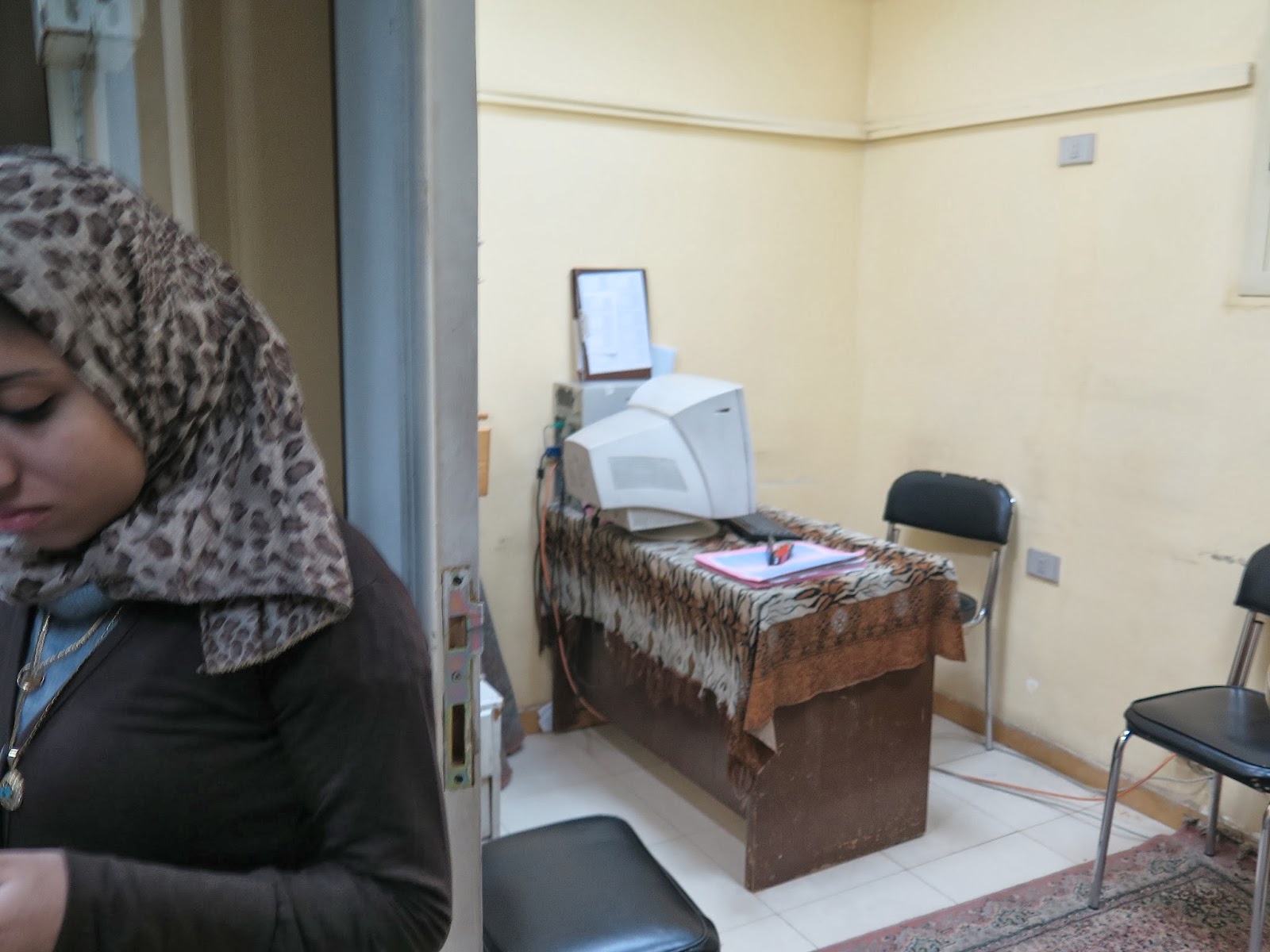 One of the things that I was very impressed with was the way that the hospital working areas were being redesigned. The doctors' offices have examination areas and computers, along with a small room with a cot for the residents whoh have to stay at the hospital at nights. 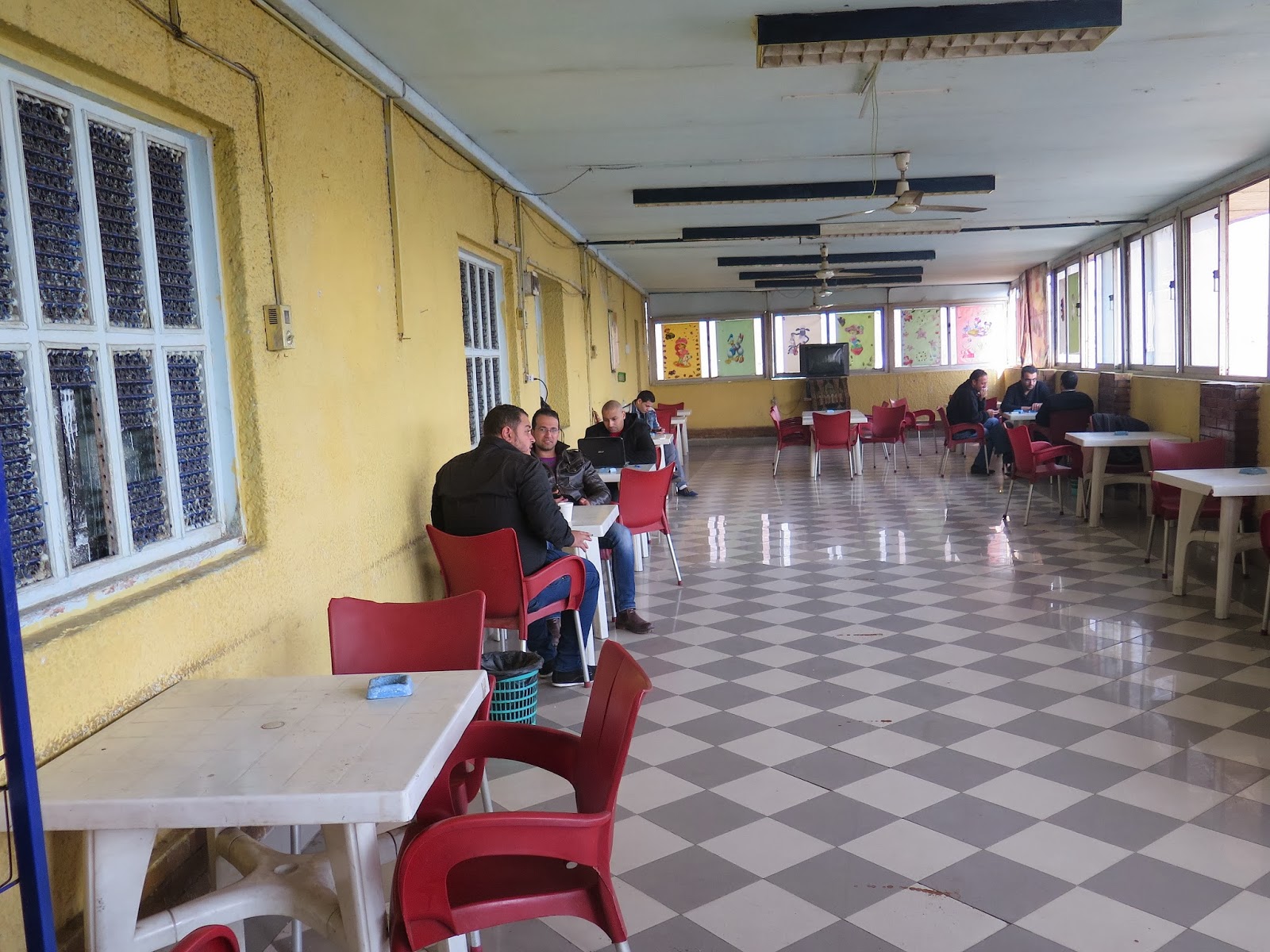 A long sunny room that is currently being used as a cafeteria for the staff will be a waiting area for families of cancer patients who are visiting to receive chemotherapy or radiation treatment. 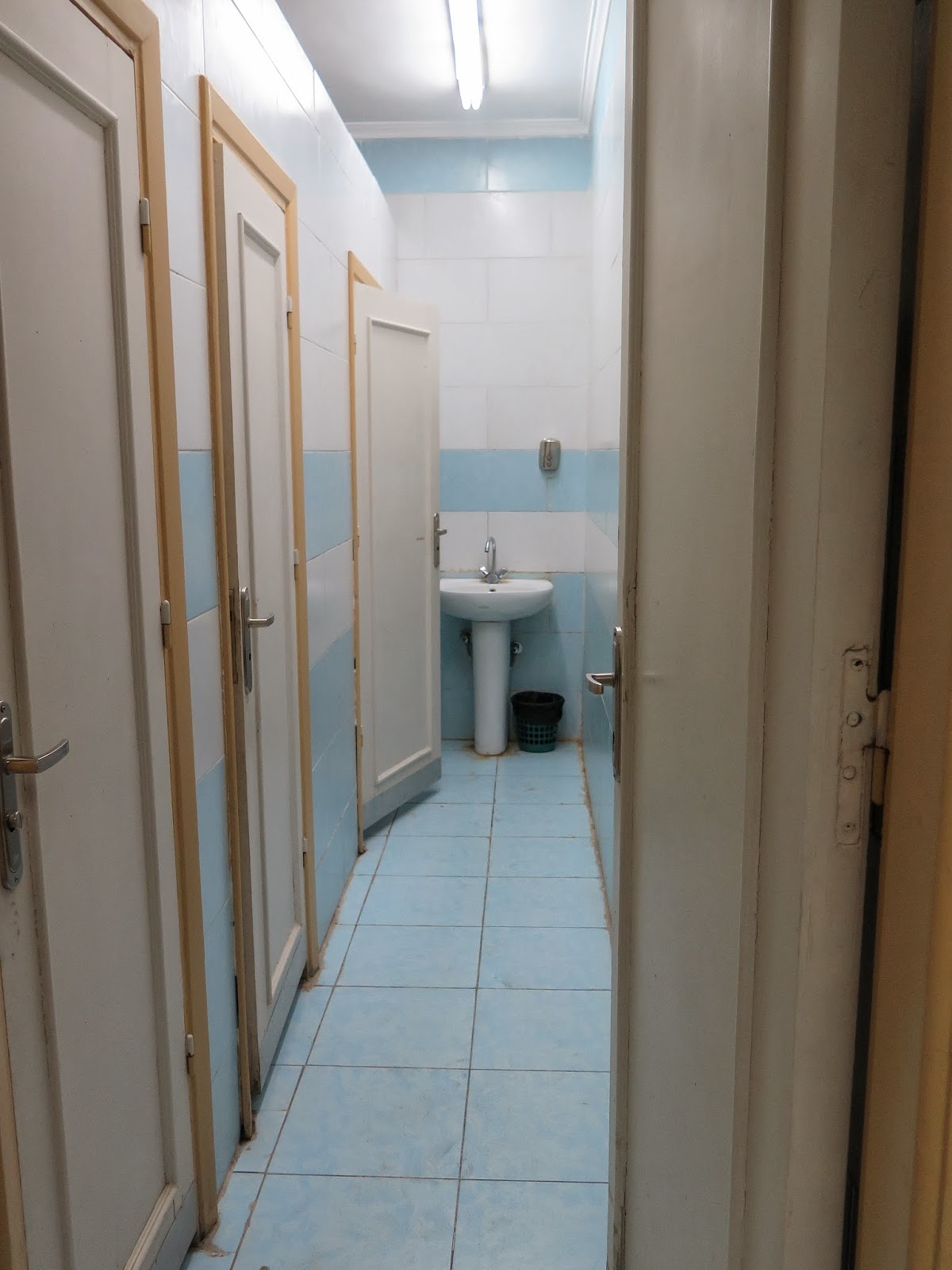 The bathrooms were in serious need of renovation. New tiles, fixtures and doors have been installed. This isn't luxurious, but it is clean and functional, which is what one needs in a hospital after all. On the public wings where treatment is free, if not extremely in expensive, there are these joint bathrooms. On the private wing, where two patients may share a room, they also share a bathroom. 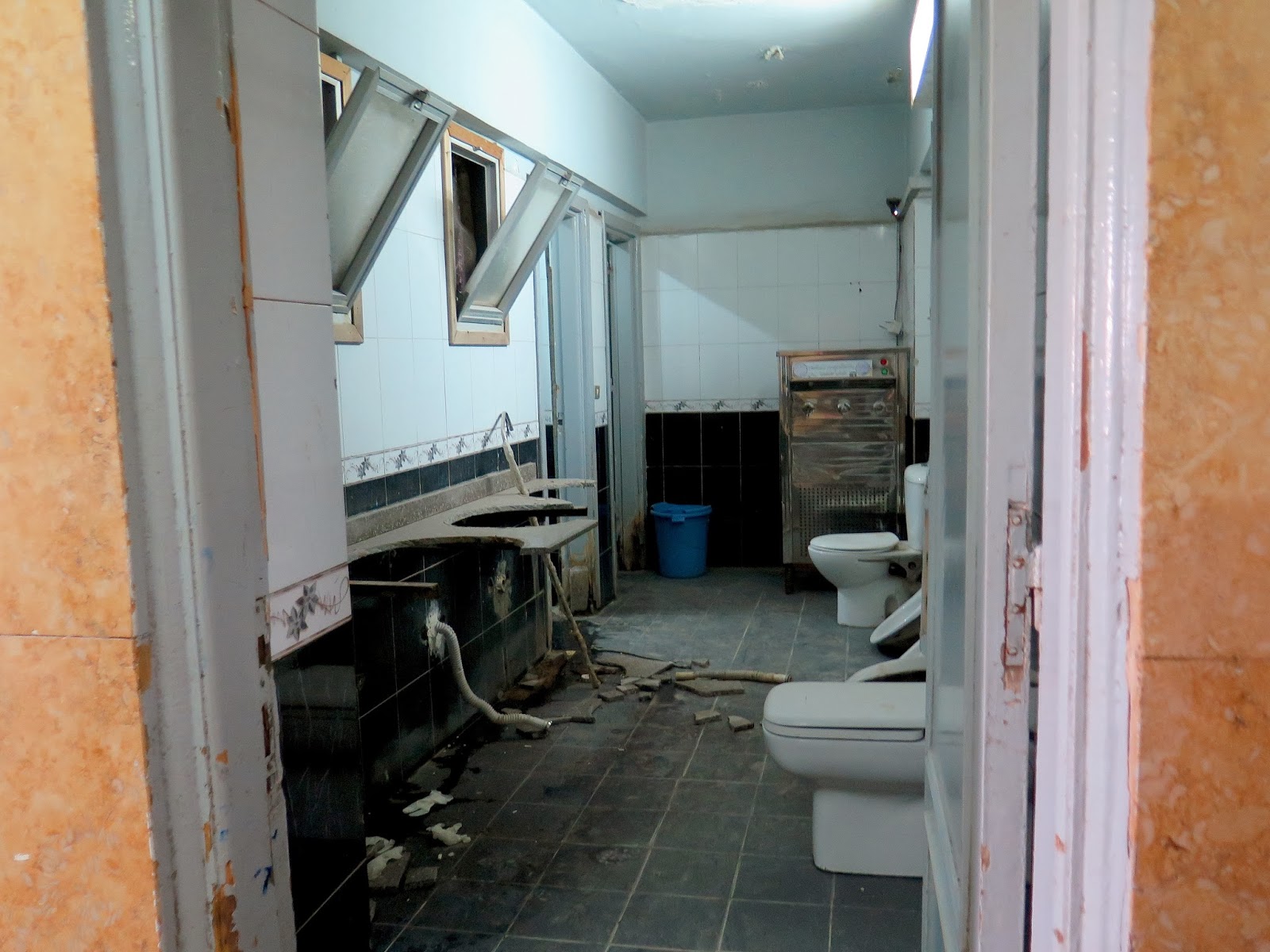 The old design for the ward bathrooms had very little or no privacy. These are being torn out for renovations. 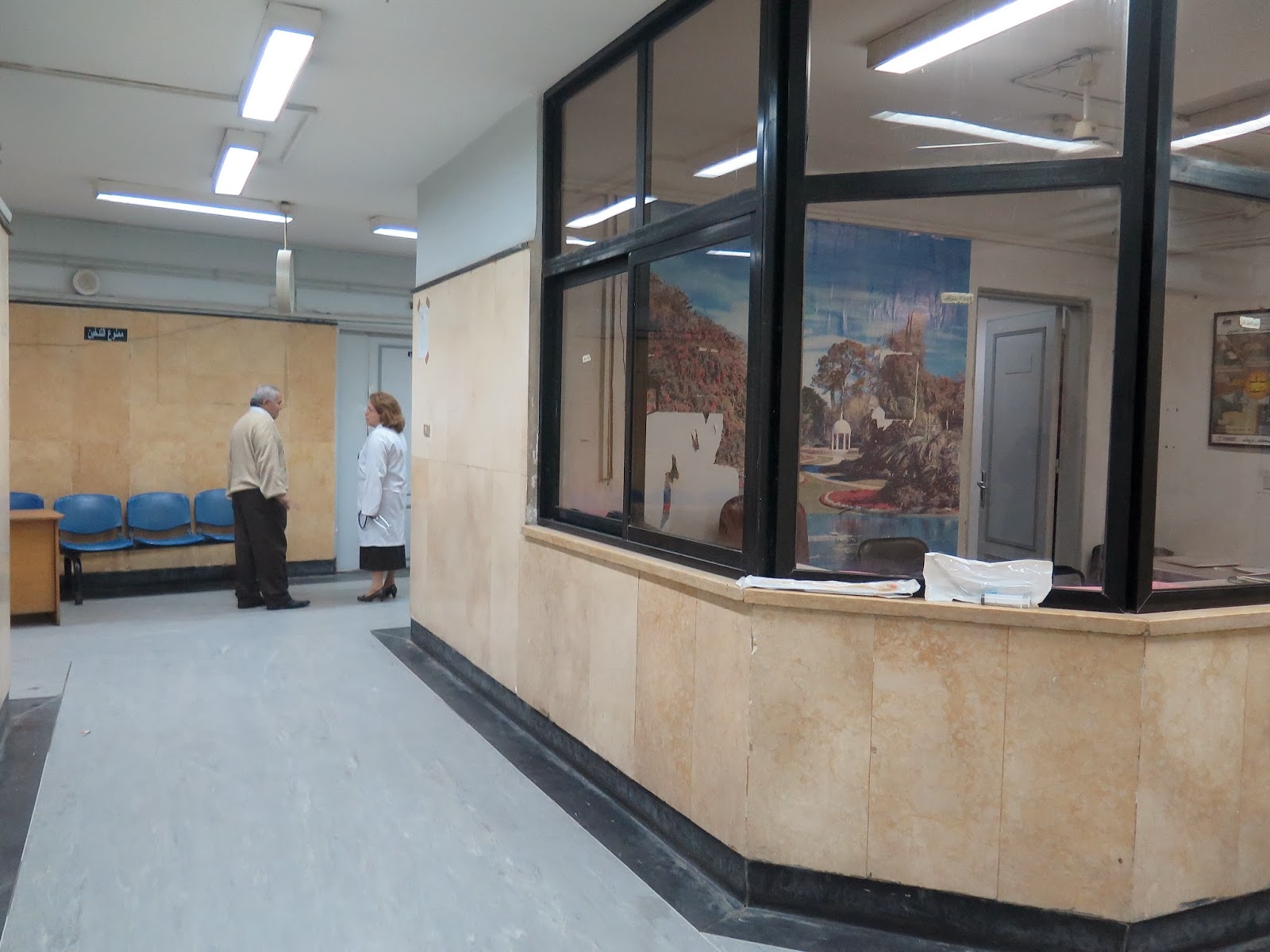 The nurses' station prior to renovation, kept the nurses away from the patients and their families, tucked away behind glass windows, but for nurses to be effective they need to be aware of what is going on around them and accessible to the patients. 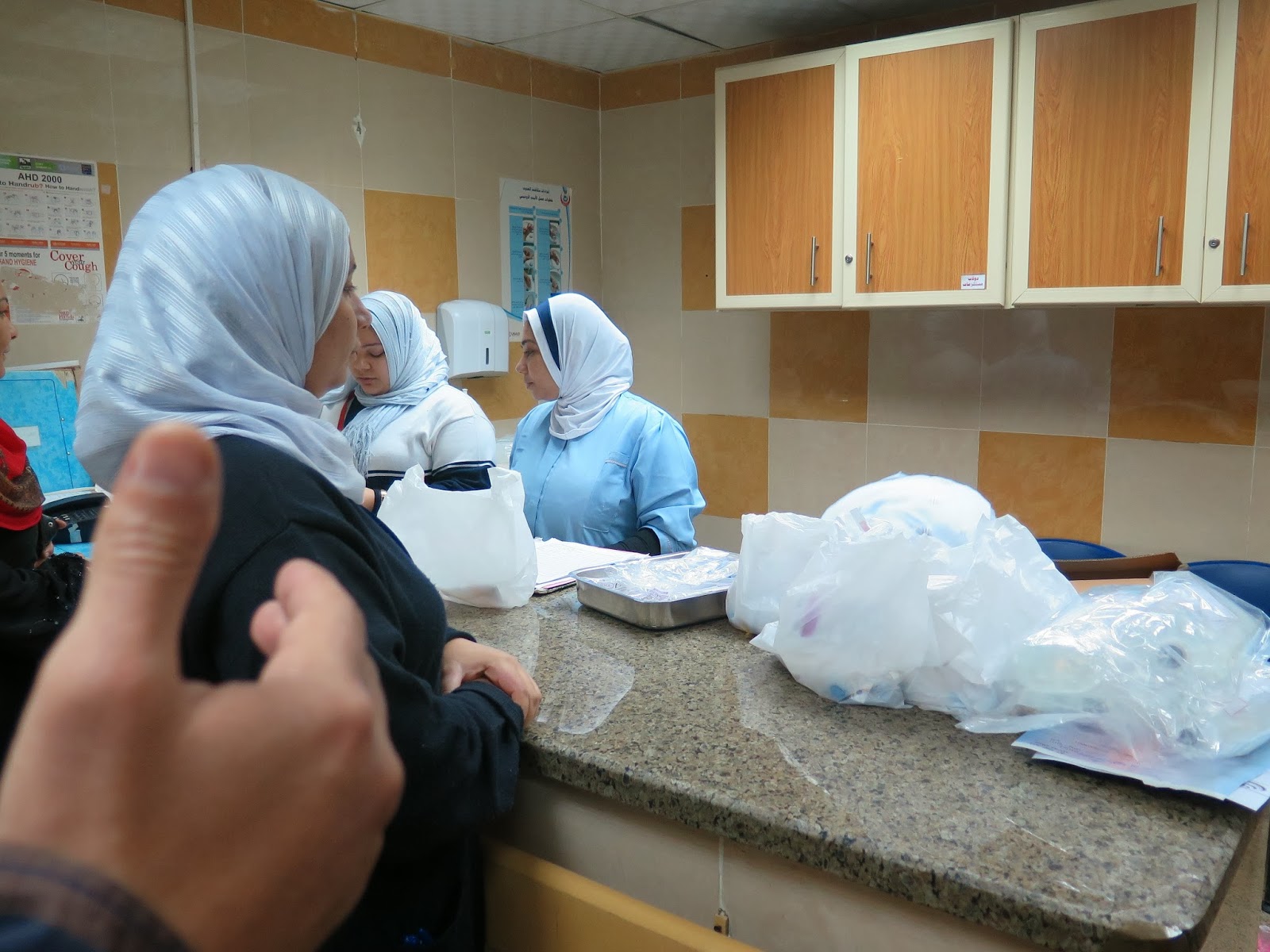 The newly renovated nurses' station is  open and the nurses are accessible to the patients and their families. Not that the nurses' dress is  very neat and clean. Government hospital nurses are not generally known for this. 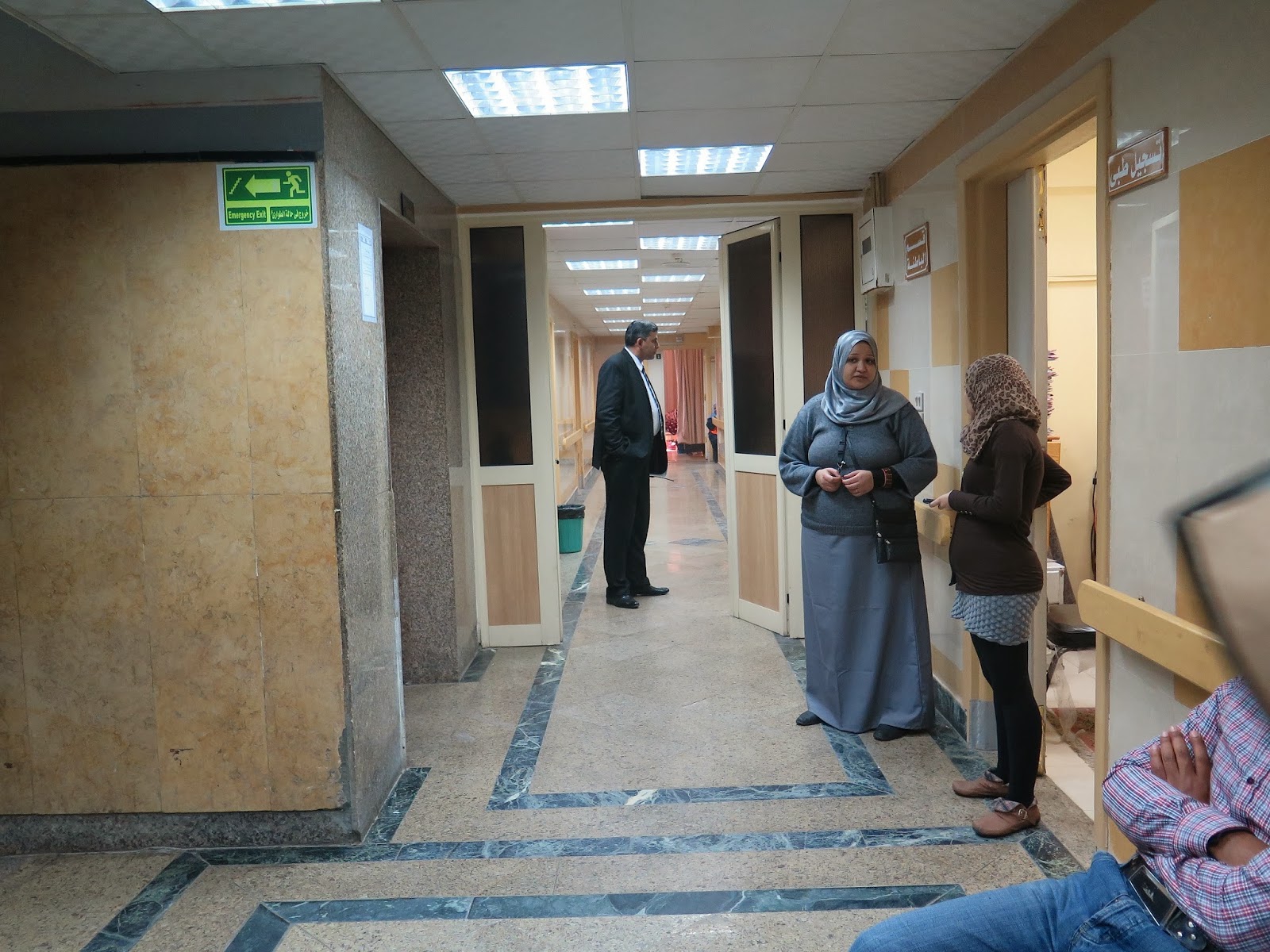 This is a shot of one of the wards after renovation. It could be any private hospital.

We look around Egypt and we see problems and difficulties in every direction. It is incredibly easy to feel that bringing things around to the way they need to be is a hopeless task. To do everything at once is a hopeless task really, but seeing what one intelligent, caring, hospital administrator/doctor can accomplish gives us all hope. We just have to keep working one step at a time.