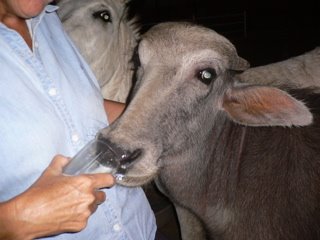 I'm sitting here feeling very hard done by. It started with a sore throat yesterday afternoon, moving into a fever. Time to spend some time being nice to my body, even if it means that I'm missing what will naturally be a brilliant iftar at the home of my friends Amr and Cristina in Zamalek. Cristina is Italian and makes her own pasta. Need I say more? But I come to this recharging period honestly. There have been a lot of things happening around here. Tracy has gone back to the US for a time to study in programs that use horses to help teach children and executives leadership and other social skills. She's not sure when she'll be back, but I'm betting on no more than about three months. Just before she left we were working night and day to finish my guesthouse in time for Sonia, a lovely British woman who wanted to stop by and experience Egypt with a bunch of "normal" people on her way to a job working with orphans in India. Not sure how "normal" we are, but we've done our best. She arrived at the beginning of Ramadan and has had probably more Ramadan experiences than most tourists. One evening, the grooms had milked the gamoosa and heated the milk with sugar. Tracy and Sonia made the mistake of drinking it next to the donkey paddock where Hanuma our young gamoosa lives and they got mugged. 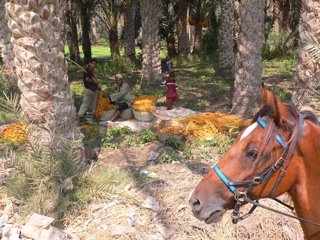 We couldn't send Tracy back to civilisation without a good ride to hold her over until she gets her next Egypt fix. She and I headed south towards Sakkara to see the date harvest, which has been winding to a close earlier this year due to the heat. 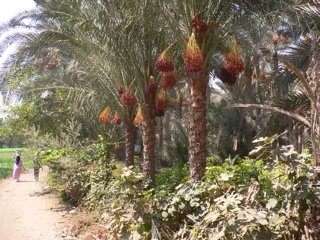 Every year I think that I have enough pictures of the date groves and every year their beauty pulls me back in. The heavy bunches of gold and red dates hanging like chandeliers in the tall palms and the children playing around the ripening dates on mats under the trees are simply too lovely to ignore. Having Ramadan fall during the date harvest is a blessing to those fasting. Fresh crisp dates are rich in minerals that replenish the electrolytes lost during the heat of the day. 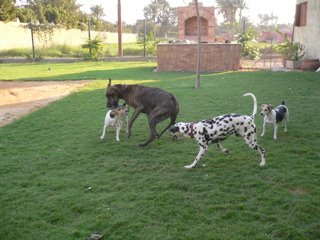 We are still waiting for the heat of summer to truly end. We are feeling happy that the temperatures are simply in the low to mid 30's C, and an afternoon nap is still a good idea, especially for those who observe the fast. With the onset of dusk, the call to prayer, and the replenishment of the body through iftar, spirits rise and then soar with the help of a sugar high. The dogs, of course, don't fast, but they observe the cooling of the evening with a wild romp on the grass. We've seen some changes in the dog pack lately too, one welcome and one not. 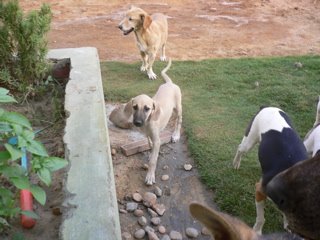 Our welcome change was a Moroccan Sloughi puppy that I finally was talked into by an old friend who has been breeding them for years. I've been stalling Hafez for years as well, saying truthfully that I need another dog like a hole in the head. But this time I got suckered into it and the new arrival is a delight. While she's about the size of the Rat Terriers right now, she will grow to be almost as tall as Morgana the Great Dane, although quite a bit lighter in weight. Sloughi's are a rare breed, a North African sight hound that was hunted almost to extinction in a rather misguided attempt to protect gazelles. They are graceful catlike dogs and Sabah has moved right into the dog pack without a ripple. I usually wouldn't name a dog with an Arabic name, to avoid offending anyone who might share the name, but when I tried to change her name everyone ignored the change and simply continued to call her Sabah (morning) with various additions. Sabah el Kheir in the morning as the traditional greeting goes. When she's being a pest, she's Sabah el Daousha, or morning of noise.

Our sad change was the loss of the man of the house, the inestimable Fred, son of Bluto who was the best Rat Terrier in the entire world, his son being a worthy successor. 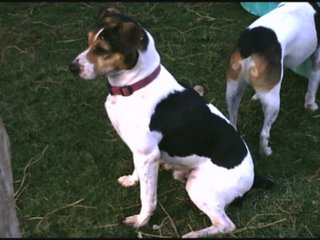 Fred, as the only unneutered dog of the pack, took his job as main man seriously and had a feud going with a neighbour's mastiff. One night somehow the mastiff (who ordinarily is a very nice dog) got in and the boys decided things. No matter how great the terrier, against a mastiff it really isn't a contest. I can't blame the other dog and his getting in the garden was one of those horrible random mistakes. He's now buried in the front garden under a white frangipani tree next to the red frangipani that marks the grave of my daughter's old cat. So one comes and another goes. Not easy, but then none of us will get out of this alive. 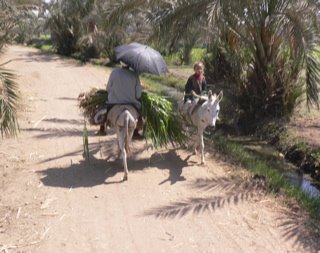 The other evening Sonia and I enjoyed one of the countryside's special treats, a sunset ride during Ramadan. We started out in the afternoon sun along the trails watching the farmers on their way home for iftar. Everyone heads home a bit earlier than usual so as to be at home before dusk and the call to prayer. Even the birds were settling in the trees along the canals as we rode along. 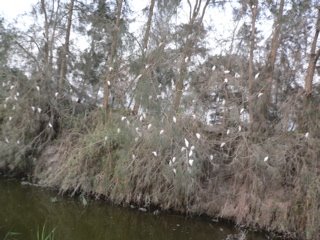 We watched the sun set, heard the call to prayer, and then heard all the human noises in the countryside fade to silence. No cars were moving, no children calling out, not a human sound disturbed the air for at least 45 minutes as everyone sat to enjoy the breaking of the fast. The moon was almost full and gave enough light to cast clear shadows of the horses as we wandered the trails on our way home. 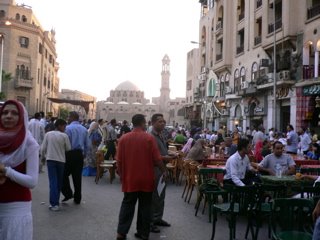 Sonia is on her way to India in another couple of days so we decided to go see Khan el Khalili at iftar. She wanted to buy some gifts for nieces and a nephew back in the UK and I've never been to the Hussein area during Ramadan, so it seemed like a good idea despite the sneaky sore throat that was scratching in the background. It was a good idea too, an amazing experience. We arrived about 4:45 pm, with the call to prayer expected roughly an hour later. My long-suffering, not to be lived without driver/farm manager Mohamed took us into town and searched diligently for a parking place while we wandered rather aimlessly watching the crowds swirling around us. Once we rejoined Mohamed we looked for a reasonable place to have iftar because Mohamed was fasting even if we weren't. We found a table on a balcony overlooking the square in front of the mosque of Hussein and relaxed there watching the families wait for the end of the fast below. 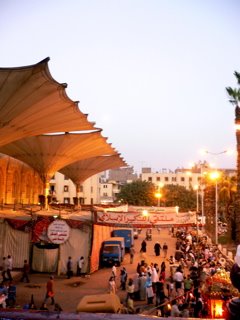 Bus after bus filled with tourists pulled in and discharged their loads, while Cairenes of every variety milled about the area in front of the mosque. When the call to prayer came everyone fell to their meal with a will...although in some cases a welcome cigarette came first. The difference between the city and the countryside was extraordinary. It was indeed much quieter in the square for a bit, but certainly not silent. We finished our meal with tea at Fishawy's, the famous coffee shop of Khan el Khalili, as it was filling with tourists, families and students ready for an evening of Ramadan entertainment. No one serves alcohol during Ramadan but Egyptians are out visiting, shopping and enjoying the night more or less all night during Ramadan. We wandered around the bazaar finding fun trinkets for kids and even managing to get ourselves lost for a while. Khan el Khalili is huge and sprawling, tiny shops stashed in among ancient palaces, warehouses, and mosques. I even found some lovely old brass bells for our donkey harness. Finally, we made our footsore way out of the city and hiked for another half hour to find the car that Mohamed had parked behind a hospital of Al Azhar university.
Posted by Maryanne Stroud Gabbani at 5:52 PM 3 comments: